It’s Week 8 and @tyler_grez is back with this weeks edition of Changing the Call! 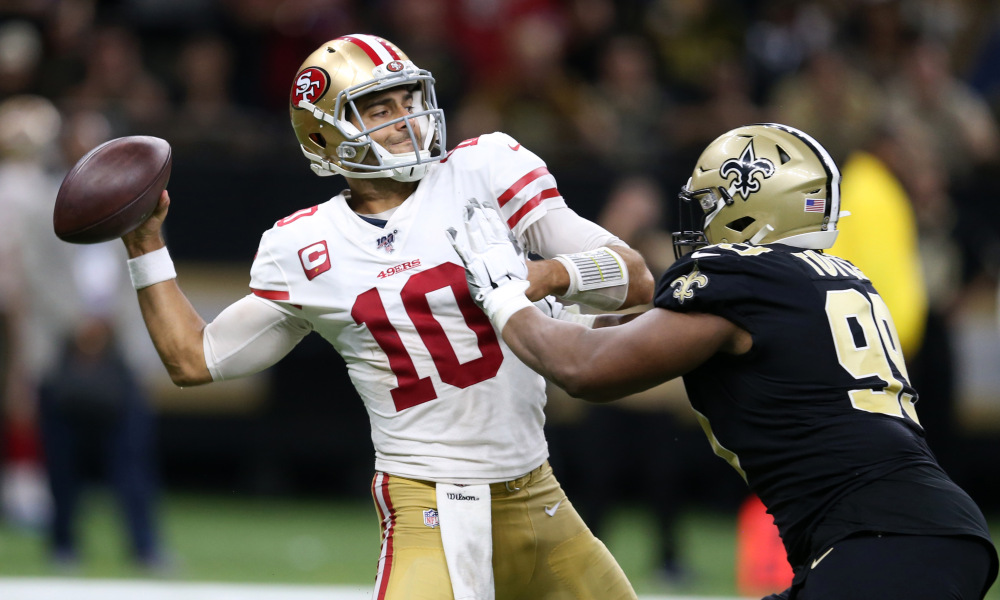 Hey Nerds! The DynastyNerds writers are here to provide you with weekly starts and sits. We will be making our recommendations based on weekly consensus PPR rankings from FantasyPros. Here is our squad and the position groups they will be covering to help you each week. Follow us, friend us, tweet us; we look forward to hearing from you!

The New Orleans Saints continue to give up points to the quarterback position. Carolina didn’t get the win this past weekend, but they were able to keep it close. The Panthers have proven to be a better team than most expected they would be, and Bridgewater is a big reason why. He’s a solid option moving forward. Bridgewater was ranked as the 18th best option at quarterback coming into the week and finished as QB13.

I anticipated a ton of points in this game, and it did not fail to deliver. Mayfield got off on the wrong foot but recovered from an 0-5, 0 yards, 1 INT first quarter to deliver one of his best fantasy performances of the season. The Browns did lose star receiver Odell Beckham Jr. for the season in this contest, but Mayfield kept this team afloat. FantasyPros had him ranked as your 24th best quarterback option this week, and he finished as QB6.

Drew Lock came into the week as the 27th best option at the quarterback position. Against a team like Kansas City, as good as the passing defense is, there will always be an opportunity for a quarterback to exceed expectations. While on film, it was a lackluster day for Lock, it was a different story for fantasy. He finished as the QB21 on the week, good enough to be a startable Superflex option.

FantasyPros ranked Ben Roethlisberger as QB10 heading into Week 7. The matchup with Tennessee was always one I never liked from a fantasy perspective. The game did breed fantasy production, but it wasn’t from the Steelers passing attack. James Conner had one of his better games this season, and the passing game overall struggled for Pittsburgh. Roethlisberger finished as QB22 on the week.

Tannehill wasn’t quite able to live up to his QB14 expectations with a QB16 finish, but he ended up performing about as expected. So, we can call this one a push. Tannehill was leading this offense as they played from behind the entire time. There were plenty of passing opportunities, but this Steelers defense is just too good.

Newton will bounce back after an abysmal performance against San Francisco. The entire Patriots team decided not to take the trip to Santa Clara. Newton has been overall solid this season but is currently suffering from a bad stretch of weeks. San Francisco was always a bad matchup for Newton and this Patriots offense. While no slouch themselves on the defensive side, the Bills are a better match in terms of what the Patriots would like to do. The Bills will likely be without a couple of key defenders this week. Newton’s rushing floor should once again emerge in this matchup. I look forward to him returning to the form that has landed him as a top 10 QB in 3 out of 5 games thus far.

Normally, I am staying as far away as I possibly can from Garoppolo in fantasy. Given the offensive scheme and player evaluation, I’m assuming most other fantasy owners are as well. However, this is one of those weeks where you can play him in Superflex formats with confidence. This week, Garoppolo and his 49ers draw the Seattle Seahawks. One thing the Seahawks do well: score points. One thing that the Seahawks don’t do well: stop opposing teams from scoring points. Overall, this team is pretty beat up, but San Francisco is still going to run the ball, and tight end George Kittle should be in for a big day this weekend. Rookie wide receiver Brandon Aiyuk is beginning to come into his own in this offense as well. I’m not sure that Garoppolo reaches QB1 status this week, but I certainly believe he will out-perform his QB21 pre-week rank.

Herbert landing on this list is absolutely not an indictment of the player or his talents. Herbert landing on this list is simply due to the fact that the Broncos typically play the Chargers well when Denver is at home. The Chargers are 3-7 in their last 10 contests at Mile High. Herbert has yet to have that “oh, crap” game as a rookie yet, but this could very well be it. The Broncos defense has been underrated by many (including myself) through the first half of the 2020 season. Vic Fangio is a defensive wizard with the way he’s been able to piece together this team. I fully expect Fangio to throw the kitchen sink at the rookie quarterback this week. I love Herbert’s long term outlook, but I likely have better options behind Herbert considering the capital that was needed to acquire him this past offseason.

This is primarily for Superflex managers, but I’m not too keen on Cousins this week. The Vikings will be coming into Lambeau, where they typically struggle. Factor in the fact that the Green Bay pass rush is starting to figure things out now. Then you’ve Jaire Alexander, who is continuing to build his resume for an All-Pro bid this year. The most promising thing that the Vikings will have going for them is the return of Dalvin Cook. Cook typically slashes Green Bay, which will only lead to more play-action opportunities for Kirk Cousins. Cousins is at his best when this happens.

However, I simply think this defense is coming into its own a week after putting a stop on one of the more electric offenses in football in the Houston Texans. Before some garbage time 4th quarter points, Houston was held to a mere 13 points. That would have been their lowest point total this year. Add it all together: a Packers defensive front coming into form, a budding all-pro corner, and one of the better performances from the defensive unit as a whole, and I am looking elsewhere this week. You may not have a better option than Cousins this week, but guys like Philip Rivers, Cam Newton, Jimmy Garoppolo, and Baker Mayfield would all get the nod over Cousins for me this week.