And we’re on to the Tiger Kingdom of Cincinnati! In this Value-Based Players: Teams A-Z installment @TripleDFFP breaks down their rookie WR, Tee Higgins. His fit in the offense, his potential and more! Find out why his future is so bright with this up-and-coming team! 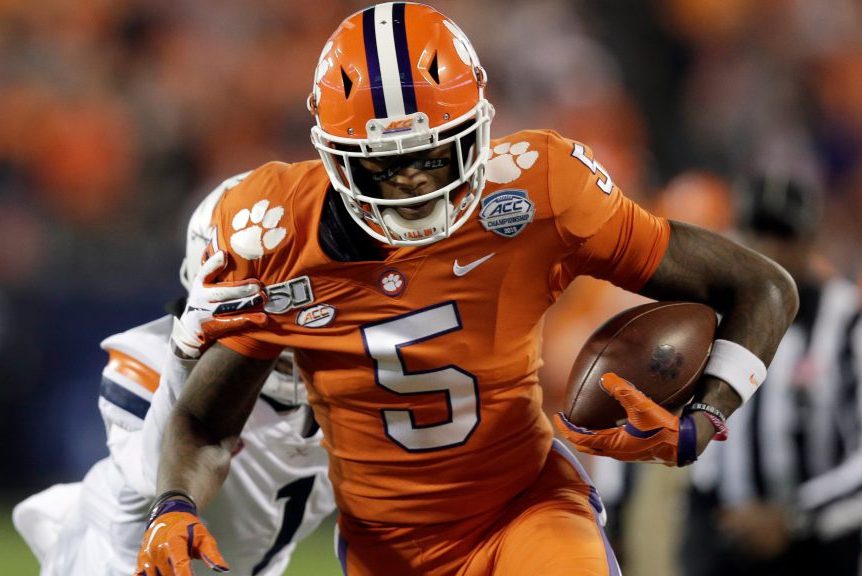 The 2019 draft was insanely deep. Like, Challenger Deep. For those of you that don’t know how deep that is… It’s the deepest part of the ocean at 36,200 feet. (At least now you can say you learned something from this article) This draft was so deep that an elite talent like Tee Higgins had been relegated to the rookie WR7 on the Dynasty Nerds rankings board.

The best part of it all is that this depth makes for exceptional value in both start-up and rookie drafts alike, which is what this series is all about. So, following the theme of the Value-Based Players: Teams A-Z run we move on to the Cincinnati Bengals and their aforementioned rookie, Tee Higgins.

Higgins checks in with an ADP of 98.34 (WR39). A draft position which, at first glance, almost seems… High? An understandable sentiment when comparing him to the receivers being drafted around him: Christian Kirk (ADP 93.42), Mecole Hardman (ADP 106.96), and T.Y. Hilton (ADP 95.56). However, after further research and projections, this price tag has begun to look like a value buy for me. Let’s dive into why:

In his three years as a Clemson Tiger, Higgins was able to build quite the reputation as an aggressive, big-bodied, jump ball machine. His chemistry with Trevor Lawrence was evident from the start as they posted impressive 2018 and 2019 stat lines together. Higgins concluded his time with the Tigers with a 59/1167/13 Junior outing, which saw a First-Team All-ACC selection and an appearance in the National Championship. Even though they weren’t able to take home the title, Higgins was still able to display his athleticism, hands, and grit throughout an exceptional season.

Come season’s end, he was considered one of the “Big 3” in the 2020 class of incoming rookie WRs, along with CeeDee Lamb and Jerry Jeudy. Unfortunately, his absence from the NFL Combine after season’s end, citing the need for recovery time, immediately damaged his real life and fantasy draft capital. Even though the damage had been done, he eventually performed at Clemson’s Pro Day, posting a 4.54/4.56 – 40 Yard Dash and a 31” vertical. An on par display of athleticism which mimicked what I saw on film yet did little for his draft stock.

What those Pro-Day numbers don’t show you is that Higgins is just a beast. The true embodiment of what a big WR1 should be. He has incredibly strong and sticky hands that can pluck the ball away from defenders, and he excels in jump-ball scenarios. I’m sure that his less-than-impressive 31″ vertical at his Pro-Day has made people question how effective he will be with next level contested catches, but those doubters are missing the mark. He doesn’t win by jumping through the roof. He wins with aggression, timing, and the aforementioned hand strength.

There are also doubters questioning his separation ability with a lackluster 40 time. Again… They’re missing the mark. Higgins is a severely underrated route runner who makes separation not with speed but with elite technique and footwork.

On top of all that, he’s aggressive as hell. He’s a monster blocker and has thrown some hits that give me JuJu/Burfict vibes. That aggression doesn’t stop there, though. He is a YAC machine. At 6’4/216 lbs, he breaks tackles left and right, just like the one seen below.

So all things considered, Higgins received a semi-appropriate draft capital being selected by the Cincinnati Bengals with the 1st pick in the 2nd round (Pick 33). He fell to the 7th WR off the board but, due to that fall, landed in a very intriguing home. As the heir apparent to A.J. Green, who is only signed through the end of ‘20, Higgins finds himself the big man on deck.

I believe that he is going to exceed expectations at his new home. His mix of size and skill will be a welcoming safety blanket for fellow rookie Joe Burrow, a relationship with the potential to develop into one of the more deadly in the NFL. I believe it has such potential because of their unique ability to grow together. No other rookie WR in the league has that ability. In any other given offense in the NFL, the chemistry is already predetermined, it is anyone’s game in Cincinnati. I anticipate the incoming rookies to stick together. Whether it’s busting balls about the National Championship game or complaining about the old heads in the locker room, there is a kinship that comes with being low men on the totem pole, working their way up together. That kind of relationship is invaluable both for a locker room and onfield chemistry.

Due to that possible relationship, A.J. Green’s impending departure, and the trajectory of this young offense on the rise, I have high hopes for Higgins’ future. I believe that ’20 will be a moderately successful outing for him, leading into a breakout ’21 and beyond.

In ‘20 he will have to compete with Green for the big man snaps. While this will hamper his production, I believe it will be immensely beneficial for his growth, learning behind such a talent. Plus, there is ALWAYS the possibility of injury for Green, who has played only 9 of the last 32 games. If that injury happens then, I believe Higgins could be the most productive rookie WR this season.

Without an injury to Green, though, I believe he will hit around 38 receptions for 500 yards and 3 TDs.

So where does that leave us with price?

Higgins is being drafted late first/early second, which is a great spot for his potential. Do not sleep on him, though… The depth of this draft makes the later 1st round and early 2nd round picks unpredictable. He should never be selected below pick 12, so if you’re getting close, grab him.

In startups, he’s being drafted with an ADP of 98.34. It’s an appropriate price to pay for a young WR, but if you’re sold on his talent, then I wouldn’t discourage you from reaching. Selecting him over older, more established WRs or lesser RBs like Kerryon Johnson (ADP 84.65), Marlon Mack (ADP 87.21), or even Mark Ingram (ADP 89.22) could pay dividends in the long run. If you’re worried about grabbing him too soon, remember that his draft classmates, Jeudy and Lamb, are going at ADP 47.01 and 44.42, respectively. In comparison to their prices… He’s a steal.

As a trade target, now might be the year to pounce. Usually, it’s a worthwhile strategy to wait for a rookie WR’s year one let-down but not with Higgins. I anticipate his hype ramping up going into next season with Green’s departure, making his price soar. So package him into a trade today, so you don’t have to pay an inflated price tomorrow because I’m excited to see what this young man’s going to do.

Fantasy Forecast: Atlanta Falcons
Titans Getting the Band Back Together