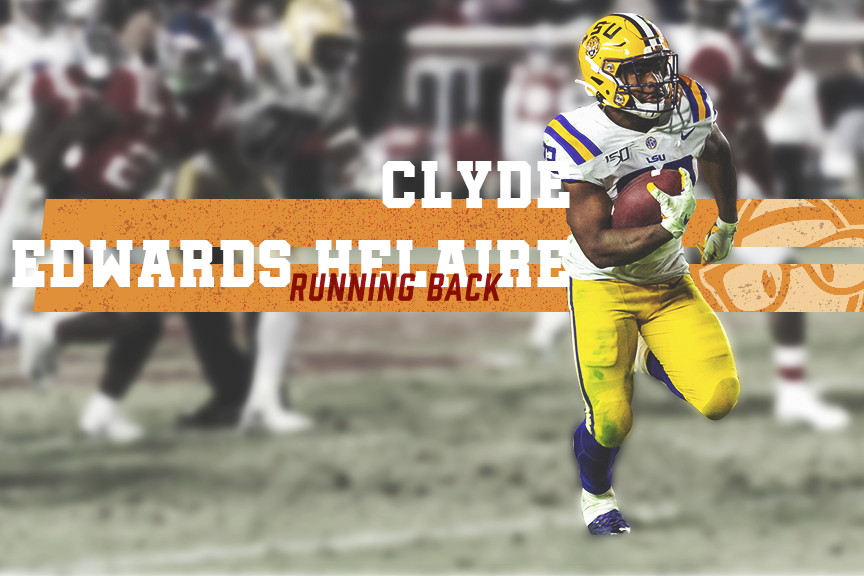 We’re going to start with this extremely surprising fact. The LSU Tigers went undefeated and were the consensus best team in the country. They’ve been debated as one of the best teams of all time with their Heisman-trophy winning quarterback in Joe Burrow along with numerous other records and awards. Despite all of that, the team’s MVP was running back Clyde Edwards-Helaire.

He was an integral part of this team, and he was recognized as such along with being named a permanent team captain. Originally from Baton Rouge, Louisiana, he was only a 3-star recruit coming out of high school, but he had a number of offers from big-name programs, such as Alabama and Oklahoma. He ultimately chose the school that was close to home, and it was a great choice for both parties.

Edwards-Helaire was given three years to get touches with the ball as a running back as well as in the kick-return game. He got to flash his pass-catching ability with 69 catches in three seasons, including 55 catches in his junior year. This is one of the more complete running backs in this class, and he’s coming off of a great season.

Edwards-Helaire is coming out of one of the best schools in college football in terms of running backs that have gone on to have solid success in the NFL. Leonard Fournette, Kevin Faulk and Derrius Guice are just some of the guys that are ahead of him on the school’s all-time rushing list, where he comes in at 15th.

Unfortunately for Edwards-Helaire, the passing game coordinator, Joe Brady, did not arrive until his Junior season. After catching 14 balls throughout his first two seasons in school, he caught 55 in that final season. They were airing the ball out more, and he was taking full advantage of it. With NFL teams looking to utilize their running backs more in the passing game, it’s great to see that he has that ability.

From a running perspective, it was a positive aspect to see him improve his yards per carry in every season. It helped him in his final year that opposing defenses were so spread out by the team’s passing attack, and he won’t get that unless he lands with a team like the Kansas City Chiefs or Arizona Cardinals. He has the size to run over defenders, but he’s not a battering ram coming out of the backfield.

When looking at any player, college or professional, you have to go to the tape. When you look at Edwards-Helaire’s tape, you’re going to notice a few things pretty early. One thing that you’re going to notice right away is his ability to hit the spin move better than most. He gets hit in the backfield on this play, but he just spins right off of the hit and takes the ball into the end zone. Also, that “guy” that he spins off of is Alabama safety Xavier McKinney, who is a borderline first-round pick in this year’s draft.

Big running backs that can bowl over opponents are necessary for the right situation. Edwards-Helaire won’t be that guy, but he’s also going to have no trouble getting through opponents. He should have been taken down two or three times on this play. Despite that, he fights through the contact while maintaining some great balance and fights for another score that would ultimately seal the game for the Tigers. He won’t shy away from contact, and he keeps himself upright when he runs into it.

On this play, Edwards-Helaire hits the hole in a hurry, and, once he’s in the open field, taking him down one-on-one is going to be a problem. He sizes up the safety that is charging downhill at him, and he goes right by him. Seeing a running back make defensive backs look silly is something that will make you smile every time.

There were several different clips that I could have put in here for his ability to catch passes out of the backfield. I chose this one because he leaves the defender grabbing for air and hoping he didn’t just sprain his ankle. He’s the perfect example of a playmaker that can do great things when he’s got the ball in his hands. Catching the ball out of the backfield is something all running backs, especially in fantasy football, should be able to do, and Edwards-Helaire can do just that.

Edwards-Helaire is more than likely going to come in around the RB 5-7 range depending on how you talk to. He gives you the ability to scheme passes for your running backs along with being a consistent dump-off option. He’s also a consistent player as a running back without being anything spectacular as a runner. In the right situation, he could be a consistent RB2 on a weekly basis with RB1 upside. However, that landing spot could do a lot to swing him one way or the other.