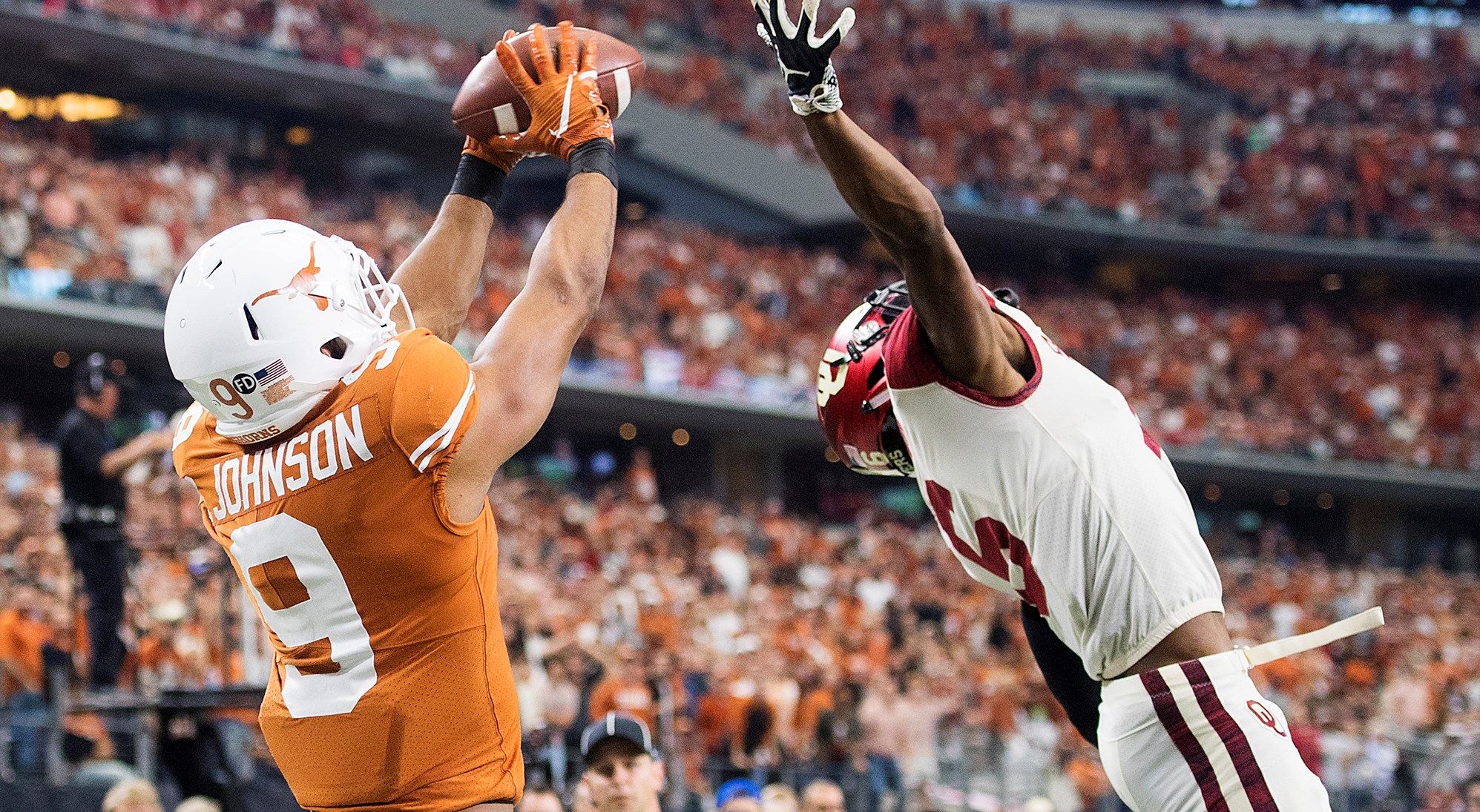 As dynasty owners, we tend to be obsessed with age. I am finding that this is no different in the devy community. Owners are constantly searching for the next hot freshman to come onto the scene and blow away the nation with his talent and ability. However, there is still something to be said for players methodically developing over the course of their college career. One such player is Texas senior WR Collin Johnson. He was one of the twin towers to play in Austin last year with Lil Jordan Humphrey. However, unlike Humphrey, Johnson chose to return to the Longhorns for a shot to win a championship, further develop his craft, and increase his draft stock. Without further ado, let us take a look at this impressive young man.

The 6’6 215 lb Collin Johnson is the product of Valley Christian High School in San Jose, California. The son of Johnnie Johnson, a College Football Hall of Famer in his own right, young Collin has football in his blood. His time in High School was wrought with frustration as he missed nearly all of his sophomore and senior seasons with injury. However, his junior season was good enough to highlight his talents and garner him several big-time scholarship offers. You can see his stats below courtesy of Maxpreps.com

The numbers were good enough for Johnson to receive a 4-star composite rating from 247 sports and to have offers come rolling in. Chief among his suitors were Alabama, Arizona State, California, Colorado State, and Texas. Johnson eventually chose to go with his heart and along with his brother attend their father’s alma mater in Austin. You can see from his High School highlights below just what Texas was counting on getting with their big-time recruit.

Collin Johnson arrived at Texas during a time of transition and turmoil for the football program. Johnson and his brother were recruited by Head Coach Charlie Strong. Having taken over the program from school legend Mack Brown, Strong had not lived up to his predecessor in the wins department. The University which had become accustomed to winning and competing for conference and national championships had endured little success under the Strong regime. 2016 would be no different. Strong again finished with a 6-7 losing record and failed to make a Bowl Game. Despite the program’s frustrations, Collin Johnson managed to get his feet wet and make the most of his freshman campaign. He played in all 12 games making one start.

After the 2016 season, the University decided it was time to make a change and replaced the man who recruited Johnson with former Houston Head Coach Tom Herman. The move promised to be a potential positive for Johnson. Herman is an offensive mind who had brought the University of Houston to national prominence with his high flying offense. The highlight of his tenure in Houston was having the school ranked #8 in the nation with a 13-1 record in 2015. Johnson took advantage of the change by exploding in his sophomore season. He played in all 13 games starting 9 more than doubling his numbers from his freshman year to 54/765/2.

Johnson was positioned to have his best season ever in his junior year. He had a talented running mate in Lil Jordan Humphrey, an offensive head coach in Tom Herman, and an up and coming QB in Sam Ehlinger. Collin parlayed all of these positives into career-best numbers across the board. He started 12 of 13 games and posted a 68/985/7 stat line. These numbers included a Big-12 Championship Game Record 9/177/1 game against Oklahoma. Johnson showed all the physical gifts he had to offer. Following the team’s Sugar Bowl win over Georgia, many analysts were uncertain about Johnson’s future in Austin. He along with teammate Lil Jordan Humphrey had a difficult decision about whether to return for another season with UT.

To the surprise of many Collin Johnson decided to head back to school for his senior year. He cited several reasons for his decision. No matter what the determinative factor was, the outcome will be the same, Johnson will be one of the most talented Senior players in the nation in 2019. He has shown growth and development every year in college. His talented QB Sam Ehlinger actively campaigned Johnson to return for one more shot. He has learned to use his large frame to its maximum potential. He is an adequate route runner who displays a knack for bailing his QB out when plays break down. He has some of the better hands in the nation making catches away from his body, rarely allowing balls to get in on him. He is also an asset in the running game where he is a willing and able blocker effectively using his size against smaller defensive players. His game reminds me of a young Plaxico Burress coming out of Michigan State. With the departure of Humphrey to the NFL, Johnson will have the ability to soak up targets at a higher clip than in the past. I look for Collin Johnson to continue his development and cruise to his first 1,000-yard season while flirting with double-digit TDs. He has recently been named team captain and placed on the watch list for the Biletnikoff Award as the nation’s top WR. He has been named to the 1st team preseason All-Big 12 squad. He is also a standout student being named to the Big 12 Commissioners’ Honor Roll for the spring 2019 semester. Only time will tell if he will be able to put together an award-winning final season in Austin. I will leave you with his 2018 highlight film giving you a taste of what is likely to come for the Texas Tower.

Thank you for reading this article! Please be sure to join the #Nerdherd so you don’t miss out on any of the amazing things we have to offer @DynastyNerds.com Follow me on Twitter @ReflipeWThenuz for more dynasty content and other musings.