Conclusion Protocol: What We Learned In Week 9 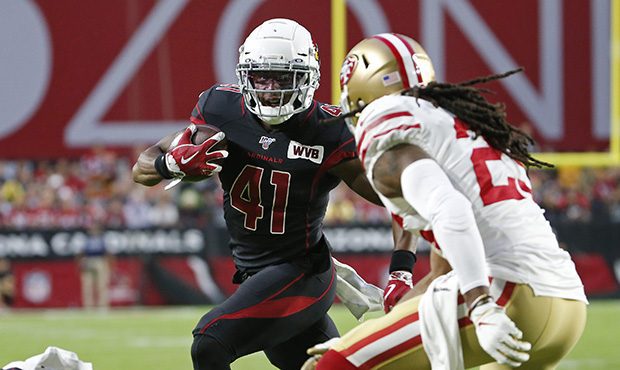 Ah, normal. Well, as normal as it gets when it comes to fantasy football. Russell Wilson is the QB1. Christian McCaffrey is the RB1. The way it should be, right?

After the usual suspects at the top of the board, it gets a little interesting. Jimmy Garoppolo finished as the QB2, and Kenyan Drake, yes, KENYAN DRAKE finished as the RB2. So with that, let’s jump right to the good and the bad of Week 9 for dynasty football:

It’s almost as if the Dolphins didn’t know what they had in Kenyan Drake, isn’t it? It’s not like like fantasy Twitter has been clamoring for Miami to unleash Drake for two season; oh, that’s right, WE HAVE.

With David Johnson and Chase Edmonds both inactive on Thursday Night, the door swung wide open for recently acquired Drake to get the ball early and often. That he did, totaling 15 of the running backs’ 17 total carries. He turned it into 110 yards and a touchdown, while adding four receptions for an additional 52 yards.

In addition, he was on the field for 84% of the team’s offensive snaps. In 22 games over the past two seasons in Miami, he was on the field for more than 74% of the snaps just once (Week 16 of 2018). With the health of David Johnson always a question and Chase Edmonds still such a young player, it’s very possible Drake sees a legitimate workload for the rest of this year, while auditioning for a role in 2020.

For those that held on to their Kenyan Drake shares, you may FINALLY be rewarded. If he continues to perform, I’d guess Arizona deals DJ in the offseason, going forward with Drake as the RB1 in 2020.

It took eight weeks, but Buffalo finally realized the Devin Singletary is a better, more explosive running back than Frank Gore. They gave him the ball, and he rewarded them with production. Not to toot my own horn (toot, toot!), but I labeled Singletary as my RB start of the week, as well! (Catch my starts/sits on Twitter @joebuttgereit)

It was just a matter of time before Singletary became the lead back. Frank Gore is an NFL legend, rightfully so, but Father Time has finally caught up. He provides nothing more than a complementary back to Singletary at this point, and will likely retire at the end of the season. Maybe opening the door for a David Johnson/Devin Singletary backfield in 2020, who knows?!

On Sunday, he received 2/3 of the team’s running back carries, and turned it into 140 scrimmage yards and a touchdown. Beyond the numbers, however, he just looked explosive, and difficult to tackle. Granted, it was the Washington defense, but I was waiting for this breakout to occur all season. The buy-low window may have already passed in our leagues, but he’s worth the inquiry.

Before I start, I know Preston Williams tore his ACL and is out for the rest of the year, but I feel I’d be discrediting his performance this season if we didn’t talk about it.

As the only undrafted player I’ve talked about in this series, he deserves the notoriety. Williams has been the unequivocal WR1 in this Miami offense, and has shown his ability should have easily garnered a selection in the 2019 NFL Draft. After the news of his injury, and the fact that he plays for the Dolphins, it may be very easy to acquire him in your dynasty leagues.

I’d make “the call”. Let’s be honest, this Dolphins will look much different next year. We could be seeing a high-flying offense centered around Tua Tagovailoa. Wide receivers would obviously take a jump if that was the case. Williams caught 32 balls for 428 yards and three touchdowns with Ryan Fitzpatrick and Josh Rosen throwing him the ball. He’s a serious buy-low guy on my radar right now as a centerpiece of the Dolphins’ offensive rebuild.

Ok, I’m officially worried. I sold most of my OBJ shares a couple weeks ago, and at this point, the sell-high window may have shut for the moment. But, I’m worried. He and Baker Mayfield have zero on-field chemistry, and he’s already chirping about not getting the ball enough.

Now, sometimes this actually works to the player’s advantage; especially when it comes to fantasy football. Star receiver complains about not getting the ball; quarterback then starts force-feeding him the ball creating bloated fantasy numbers. This would be fantastic (especially for my infinite OBJ best ball shares).

I’m not so sure this will happen though. Mayfield seems determined to throw the ball anywhere else. It’s misleading that Beckham still leads the team in targets, but his target share, and catch percentage is much lower than what it’s been over the course of his career:

First eight games of each season (excluding 2017 in which he only played four games):

The ball is just not heading his way like he’s used to; we’ll see how that affects the mental aspect of his game. We all know what he’s capable of, he could finish the season with just 70 catches, but turn that into 1200 yards and 11 touchdowns. However, hard to deny the pace: 78 catches, 1150 yards, TWO touchdowns. His career low is three touchdowns in 2017, and he only played in four games that year.

I’m putting the feelers out to see what someone may be interested in paying for him. He’s still just 27 years old, and is as valuable a dynasty asset as nearly anyone, but if I can sell high, I am.

With Trubisky as your quarterback, games like this are inevitable. There will be weeks where it is just impossible for him to get the ball consistently; and it’s impossible to predict when these games will happen. Deciding what to do with Robinson is tricky because of his talent. His ability is off the charts, he’s been a dominant receiver with quarterbacks named Blake Bortles and Mitch Trubisky.

In a re-draft league, I’m selling him without hesitation due to that schedule. In dynasty leagues, I’m strongly considering it dependent on the competitive window of the team. If you’re going for broke to win this year, sell him. If not, hold on and pray he manages to see the ball enough to produce in tough matchups.

As always, follow me @joebuttgereit on Twitter where I’m always available to answer questions and just talk shop!