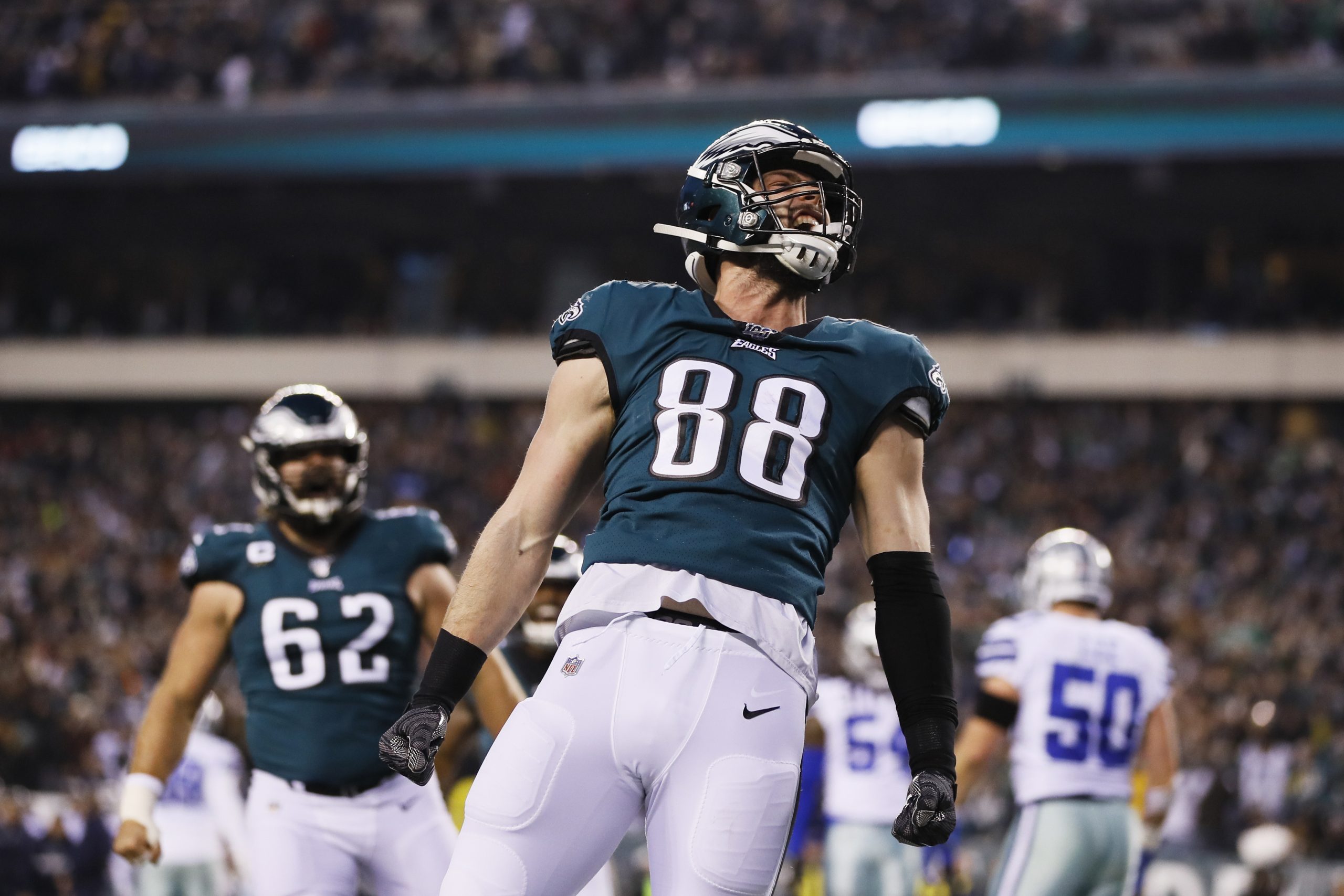 Look, we’ve all heard it before. Tight ends take time to develop. Look at Travis Kelce. Kelce didn’t surpass 1,000 yards receiving until his 4th year in the league. I’m here to tell you today, Goedert is about to break out in 2020 unequivocally.

Goedert, who was already the PPR TE 10 in just his sophomore season, is about to take that BIG third-year leap. I have Goedert projected at 102 targets, 68 receptions, 1,004 yards, and 8 touchdowns, making him my TE4 in redraft leagues for 2020 and my overall Dynasty TE3 behind Kittle and Andrews. Yes, these would all be career highs for the former South Dakota State University standout, but here’s why it’s going to happen.

Who is Goedert most competing with for targets? The Eagles target depth chart will be Zach Ertz, Dallas Goedert, Miles Sanders, and rookie Jalen Reagor. I expect Alshon Jeffrey to start (and end) 2020 on the PUP list, while DeSean Jackson looks just to be an on field mentor to Reagor, not a real target volume threat.

With teammate Zach Ertz on the verge of hitting the dreaded age cliff in 30 years old this season, it’s Goedert’s time to shine. At the end of the 2019 season, Ertz lacerated his kidney and fractured his rib. Ertz, who has missed game action in 4 of his last 5 NFL seasons, will not find the fountain of youth at age 30. Injuries are just going to take longer to heal. More importantly, there is a potential out in Ertz’s contract in 2021.

For Goedert, the draft capital is there. The Eagles moved up in the 2nd round of the 2018 NFL Draft to select Goedert at 49th overall, sniping him from going to the rival Cowboys. The Cowboys were crushed when Goedert didn’t fall to them in round two as they were hoping to replace Jason Witten.

The Eagles coaching staff loves Goedert. The only thing we ever hear out of Eagles camp are glowing reviews for the 3rd year tight end. His athleticism shined as soon as OTA’s opened his rookie season. Listen, he’s big, fast, and runs great routes. This guy is going to be un-coverable in 2020.

Goedert has massive hands and an even bigger catch radius. He can box out defenders with his massive frame and is physical with the ball in his hands.

Critics say his blocking is poor or below average. Who cares? I want my tight ends running routes and being the best friend of a quarterback in the middle of the field. I see this as a strength going into his 3rdseason as he will almost always be on the field in passing down situations. We know how much Philly likes to run 12 personnel.

Goedert has played in 31 out of a possible 32 games for the Eagles, so health is not a concern. Don’t let that sucker punch from last week fool you. Goedert is going to be visiting the end zone quite frequently in 2020.

We’ve seen Goedert’s highlight-reel plays, one-handed catches, and off the charts athleticism. What we’re about to see is Goedert take those tools and put together a breakout season. The risk is worth the reward in Dynasty. Go trade for him now before Dynasty owners realize how good this guy really is. Goedert is a special talent on the brink of greatness.