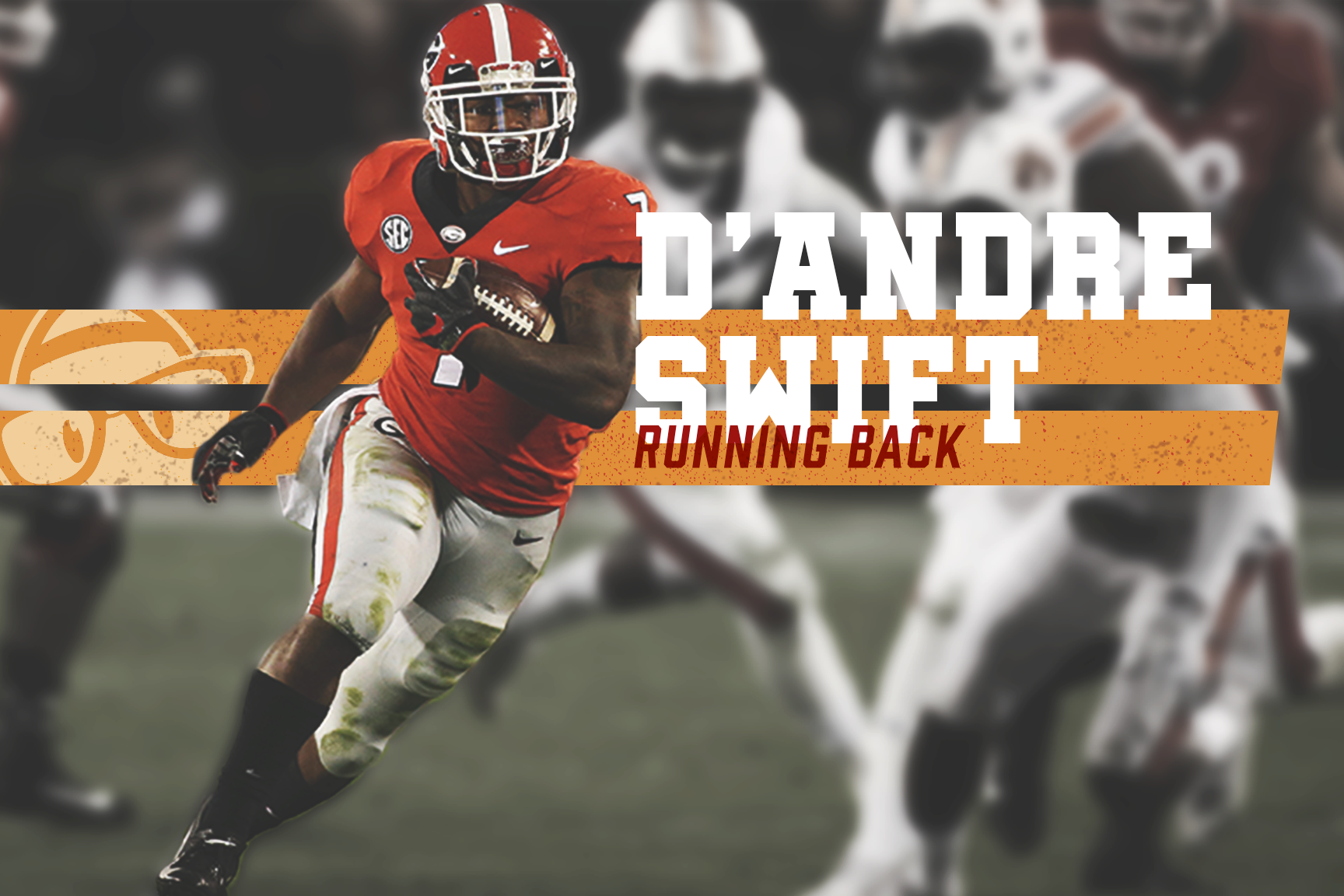 A three-year contributor and two-year starter at the University of Georgia, D’Andre Swift is leaving as one of the most consistent year-to-year producers in this class. He was a 5-star recruit coming out of high school, and he was the top recruit in the state of Pennsylvania. While being the top running back in his state, he was the third overall recruit in the country at the running back position behind Najee Harris and Cam Akers.

Arguably the top running back in the SEC this year, Swift was named to the All-SEC first team by the coaches that he played against, and he was voted to the All-SEC second team by the AP voters. In addition to the recognition he gained from his peers, he was recognized as one of the team’s four captains for the 2019 season along with being named as one of the two co-winners of the offensive MVP award for the team.

Unlike some of the other backs in this class, he has several big games on his resume. He’s played in three straight New Year’s Six bowls along with being a key contributor on a team that has won 11 games in each of the past three seasons. Swift has developed well, and he’s coming into the NFL with a lot of promise from that big-time game experience.

Swift finished his college career with back-to-back 1,000-yard seasons, and he did so while averaging 6.3 yards per carry over those final two seasons. Swift brings consistent production against the best teams in the country from his time in the SEC, and he isn’t coming in with the high volume of touches that you’re getting with guys like Jonathan Taylor and AJ Dillon, who are considered to be two of the first few running backs taken off of the board come draft time.

He had nine games over 100 yards in his final two seasons, and he likely would have finished with more if the team wasn’t trotting out multiple solid recruits at the running back position. The Bulldogs also weren’t the most powerful offense with their focus on controlling the clock and playing great defense.

Swift only registered 73 catches over three college seasons, and he had no more than 32 catches in any one season, although that doesn’t mean that he’s a great pass-catcher. However, with that low total, there will be teams that move him down their boards as a result. That just means that some team is going to be getting a better value later in the draft.

Swift has great speed when he gets to the edge, and his ability to run in space is outstanding. He demonstrates a strong ability to read blocks in space, and, when he’s running downhill, he runs with a good deal of power. With a lot of teams working to incorporate lateral running that gets the defense moving sideways rather than downhill, this is the exact type of play you want to see the back succeed on.

One technique that I like to see out of my running back is the willingness to see and hit the hole when it’s not a mile wide. Some running backs will see a small gap and assume they have to bounce it outside, but Swift shows here that he can get through a small crease and turn it into a big gain. If your offensive line isn’t paving roads like the Dallas Cowboys of old, Swift can still make it work.

Swift has excellent contact balance, and he’s able to keep his feet moving to continually churn out additional yards. He has a defender around his ankles with another coming at his shoulders. He squares him up and uses his momentum to spin off of the would-be tackler which leads to a foot race to the end zone.

Remember when we talked about the ability to run horizontally and get up the field? He does it even better here. The corner has the angle on him at the edge, but Swift uses his quickness to get around him and turn this into a 10-yard gain. These are the special plays that set him apart from other guys in this class. He also finishes the run with power which is always a good thing to see out of a smaller back.

Swift is very close to the top of my rookie running back rankings heading into this year’s draft and rookie drafts. He has the ability to catch passes out of the backfield, although it wasn’t shown all that often at Georgia. He is relatively scheme independent, and, with the right landing spot, he could be a legitimate fantasy starter during his rookie season.