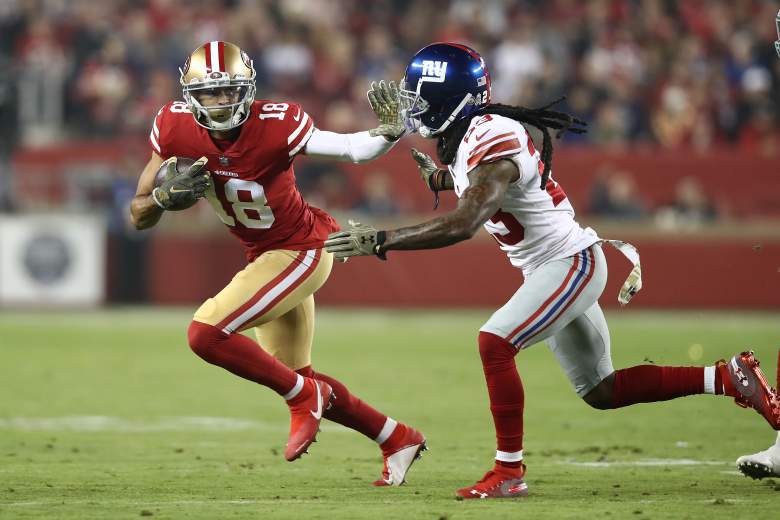 There was a lot of smoke coming out of San Francisco this summer about Dante Pettis, the team’s presumed #1 WR, losing his job. There was talk about Trent Taylor leading the team in targets. There was a constant buzz about Deebo Samuel, only intensifying with his impressive preseason performance; then there was Pettis playing in the preseason fourth quarter with the third-stringers, and Shanahan’s comments that he “has to earn a role in the offense.”

Since the season started things have only gotten worse. In week 1 he saw two snaps and one target. In week two, his snap share was up in the 30s but he wasn’t targeted, with his only touch coming on a gadget play. Meanwhile, his teammate Deebo Samuel is starting to have a breakout, posting a 5/87/1 performance in week 2.

What do we make of this? Has his fantasy value burnt to the ground, or is this wide receiver just waiting to explode?

Drafted at #44 overall in the 2018 draft, Dante Pettis has draft capital on his side. His athletic profile is average, and his college dominator rating is a good-not-great 31.6%.

His efficiency stats from 2018 are far more interesting and reflect the talent that led San Fran to draft him so high. His YPR and YPT are both top-ten in the league, though those stats reflect role and playstyle as much as skill.

Target separation is also fairly sticky- it’s consistent over time- and with 3.4 yards of average separation (as per NextGen Stats) Dante Pettis is top 10 amongst WRs. Also excellent is his Football Outsiders DVOA of 16.8%, which measures his performance across situations as compared to league averages. That is a top-20 number.

The only thing lacking for me in Pettis’s 2018 stats is volume- he never saw more than seven targets a game. But Pettis didn’t start the year even as the nominal WR1. He only earned that role during the final stretch of the season, and even then he was firmly behind Kittle in the pecking order. Kittle more than doubled the target share of the second-most-targeted pass catcher; he was generally the first read for Beathard or Mullens, and with good reason; Kittle is a dominant player.

Pettis was a rookie in 2018. Wide receivers typically take a year or more in the NFL to reach their prime. If he gets the work, his 2018 production should be his floor. There is plenty of room for this guy to grow. Although Pettis played in 11 games, he only started seven, and there were a handful of games with Beathard under center during which he played 11 snaps or fewer and was not targeted.

There were eight rookie WRs last year with more yardage than Pettis; but, if we take his pace from the seven games he started, we would extrapolate to a 928 yard, 9 TD season. Both would have been #2 marks amongst the rookie class. Talking about a player being “on pace” is always a bit spurious, but Pettis’s outburst at the end of the 2018 season is tough to ignore.

Let’s take a look at the film!

First, I want to show you some of the incompletions to Pettis. His catch rate wasn’t great… but neither was his target quality.

I watched every snap of three games. He had one actual drop.

Now that that’s out of the way, let’s look at some of the nice plays I found.

In this route, Mullens hits Pettis in stride for a great completion. Pettis gets off the press well, and he’s exactly where he’s supposed to be Mullens has to let his one fly before he’s even beaten his man. That’s trust. Pettis holds on despite the corner trying to strip the ball.

This is subtle but Pettis’ initial release shows fly route. Shanahan uses the cushion Pettis was getting from the corners for an easy gain on the slant. It’s a poorly placed ball (behind him) but Pettis handles it easily.

Again, this is more subtle, but I like it. Check the timing with Pettis & Mullens; Pettis hasn’t released yet when Mullens lets go. Pettis uses physicality to create space against the press despite being a smaller receiver.

Pettis shows good awareness here. He sees Mullens under pressure and sits down in the soft spot for a nice gain

Pettis runs a nice dig here. He threatens downfield effectively enough to keep the cushion and have nice separation at the catch point. He catches the ball actively, with his hands away from his body and in stride for a longer gain.

This is a great release for a nice little fade in the end zone. Notice the subtle head fake to sell the inside release.

This is a great route and a great play call against the coverage. Pettis is drawing the safety, he’s effectively bracketed. He beats his corner, first, he freezes him with a head fake, showing an out route, then roasting him with burst, threatening downfield, and gets the safety backpedaling. As soon as the corner turns his hips up field to try to catch up Pettis breaks his out route, getting great separation at the catch point.

The Verdict: What To Do With Pettis?

When I started this analysis, I wasn’t sure which way to go with this. But rewatching these routes (for the fourth or fifth time) has gotten me excited for this kid.

He’s a good receiver. What I see in this film is what many scouts said during his draft process: Pettis is one of the best route runners from the 2019 class.

I’m not sure what’s been going on in San Francisco, but there has to be more to the story than we’re hearing.

Are there off-field issues? Is there an attitude problem? Did he show up out of shape? Was the preseason injury worse than we were led to believe?

Something else must be going on there because Pettis’s skill justifies a starting position & a healthy target share.

So what should you do?

In redraft, he’s droppable, unless you have a huge bench. We can’t wait for players in redraft. Go get Demarcus Robinson or Mecole Hardman.

If you have Pettis in dynasty, hold. Don’t freak out.

Even if there’s some serious issue in SF, I’d expect him to get a shot somewhere else. He was a 2nd round pick, and that means something. He has the talent to be a difference-maker. It’s not a projection; he’s shown us the ability to win consistently against 1st string corners in the NFL. He runs routes with savviness, using nuance to deceive DBs and create separation. He should be a successful player in this league.

If you don’t have him, should you make a run at him?

Maybe. But only if you can get a deal. Looking back at the trades I made for him a few weeks back, I lost, and I was already buying low relative to his draft cost from spring/summer.

At this point, there’s probably a lot of Pettis owners in full tilt. He could be a borderline cut for some owners. See if you can get him cheaply as a throw-in or in a combo deal.

I don’t think I would give a 2nd for him straight up right now. Maybe not even a 3rd, this draft class has so many good options that there’s still going to be viable options in the 3rd round. I doubt any owners will sell him for a late-round pick, so it will be hard to make a deal on this.

You might be able to find an expendable bench player on your team that improves the Pettis owner’s team, and that might be your best bet.

As much as I still think he has the potential to work out, my confidence is shaky. We’ve seen talented players wash out of the league due to attitude or work ethic issues. So don’t overpay.

Let’s hope he gets it together! Watch for any news that might indicate there is an explainable reason for his disappearance. If you’re the first to the news, it gives you the power to make a smart move.