@crockett_88 looks back on David Montgomery’s polarizing early career, gives a thank-you to the most bullied RB1 in recent memory, and offers a tempered look into his fantasy future. 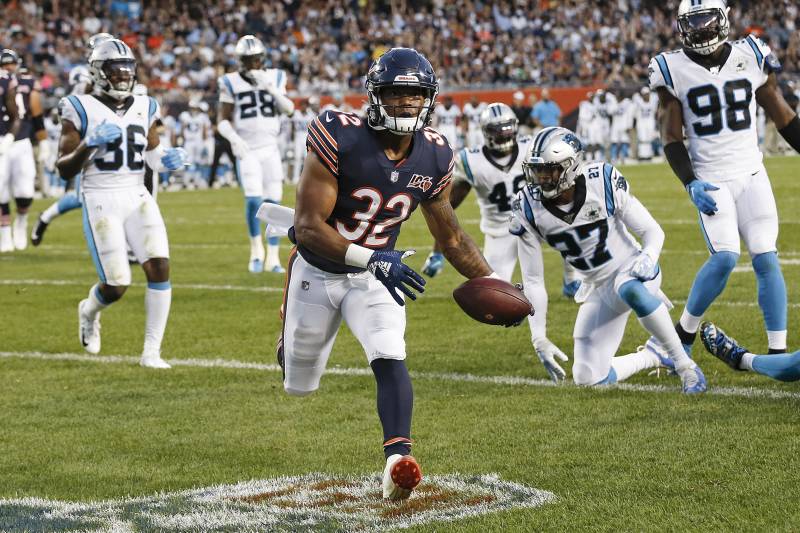 Last summer, fantasy managers pored over the NFL schedule for a COVID season that may not have even happened. They searched for clues, specks of insight into matchups, faint scents of glory in the winds of circumstance. Data scavengers hunted the slates to pinpoint players and teams, targets, and duds. Like so many before them, managers sought the almighty edge from the intangibles themselves. Playing schedules and matchups this way is hard to do. A million statistics go into determining top-ranked offenses and defenses. Just as important, a million stats go into identifying the ones that belong at the bottom. Managers win or lose trades, seasons, championships, sometimes entire years off these bets on time and place. When they burn a manager, it’s often a grueling climb back to contention. But when they hit, a dynasty can really take off. This is the story of David Montgomery.

A player’s matchups play a major role in their ceiling for a given game or season. DK Metcalf and his foil Jalen Ramsey come to mind immediately. In 2020 everyone knew to start their running backs against Green Bay. But sometimes, this game of playing the schedule extends to season-long, title-winning (or losing) proportions. That often looks like a hot receiver running into a gauntlet of elite secondaries. Other times it’s a quarterback finally getting his reckoning from the same. Not as often, but often enough to matter, the opposite happens. Then a player finds a red carpet to top-shelf fantasy production. Sometimes that player is David Montgomery.

Montgomery has had a tumultuous career so far, at least according to most fans and fantasy players. A forgotten third wheel in 2019 behind Miles Sanders and Josh Jacobs, Monty looked like a first-round rookie bust. 889 yards on 242 carries in 2019 was good for a concerning 3.67 ypc, and he was only able to add six touchdowns. His receiving work was less appealing, a measly 185 yards on 25 catches and one more touchdown. This underwhelming line (paired with Matt Nagy’s atrocious usage) spurned many fantasy players and led to a near consensus condemnation of David Montgomery as a fantasy undesirable. Poor production on high volume, stuck on a bad offense, nothing worth buying.

Then folks started to notice David Montgomery’s schedule. Color-coded eyes grew ten sizes. The man had a cakewalk of games, and it only got better and better as the season wore on. At his value, managers could grab a true league winner for the price of a flex player. Still, few would target, and less would buy. The stigma of rostering David Montgomery had become too damaging to outweigh any benefit the young starter could offer a lineup. These are the ones who fell.

Others bought the obvious. These others bought a sophomore jump that neither Jacobs nor Sanders matched. In 2020 Montgomery improved his efficiency to a solid 4.33 ypc, totaling 1070 yards and eight scores. An early-season injury to Tarik Cohen benefited Monty even further. A lovely 68 targets went straight to #32—good for 54 catches, 438 yards, and two more scores. All told, Monty finished 2020 as the RB6 in standard scoring and the RB4 in PPR, tallying 1508 scrimmage yards and 10 touchdowns. On a nightmare of a team that was just never fun to watch, Monty gave everyone a reason. He came into his own, proved all of his doubters wrong, and turned in a season that exceeded the expectations of even the most hopeful offseason buyers.

Before this goes any further, it’s time for everyone in the fantasy community to thank David Montgomery for this beautiful season. Say it with your chest. Everyone say thank you, Monty.

Now we find ourselves in a new offseason. With an even more eye-popping resume, David Montgomery is still RB21 in the Dynasty Nerds rankings. He has lived in the RB21-25 range throughout his time in the NFL, including his dominant run in 2020. This is certainly thanks to numerous concerns: 1) he remains a Chicago Bear 2) Tarik Cohen will return 3) The schedule won’t be there next year 4) His job isn’t safe 5) Lots of younger, more elite talent 6) His efficiency still isn’t there.

All are reasonable, but the only one that’s deeply worrying is his efficiency. Looking at the advanced stats from FantasyData.com, Montgomery underwhelms in categories that could allow him to sustain his elite production. In 2020 he ranked 24th in fantasy points per attempt (1.06) and per opportunity (.83). He was also low in other significant categories, ranking 28th in juke rate (20.3%) and 42nd in breakaway rate (2.4%).

The bright side of those advanced metrics is Monty’s yards created on a per-touch and per-game basis. His 1.49 per-touch rate ranked 15th, and he took 5th overall with 29.9 yards created per game. He and James Robinson (30 YC/G) were neck and neck while Henry, Chubb, and Cook made a clear top tier with their rates of 62.3, 54, and 47.1. This is a category that can lead to continued production and usage from Montgomery and James Robinson, for that matter.

These numbers don’t point to an elite player, but it’s time to stop pretending that David Montgomery is a useless fantasy asset. Much like Chris Carson in the past, Montgomery is a strong RB2 with consistent RB1 upside. His cost is nowhere near his production. Given his price, Montgomery—23 years old and locked into a 240-touch role—should be high on your list of targets. No, the numbers inside his 2020 season don’t suggest another top 5 position finish unless the cards fall perfectly again. Still, he should return high value for what he will cost fantasy managers.

If you’re a contending team with comfy draft capital in the 2nd and 3rd rounds, or if you’re barely hanging on through this free agency chaos, cook up a pick combo to send to Monty’s manager. Andy Dalton should help things, and another big receiver in free agency could jumpstart the Bears’ production further. Monty has proven his worth for Chicago and for fantasy as a durable, bruising back with determination and guaranteed volume. Those are elements every dynasty manager covets in a young running back. It’s time to stop acting like David Montgomery doesn’t offer them.