Don’t let age scare you. @OMalTheAlleyCat tells us why we should not fade DeAndre Hopkins 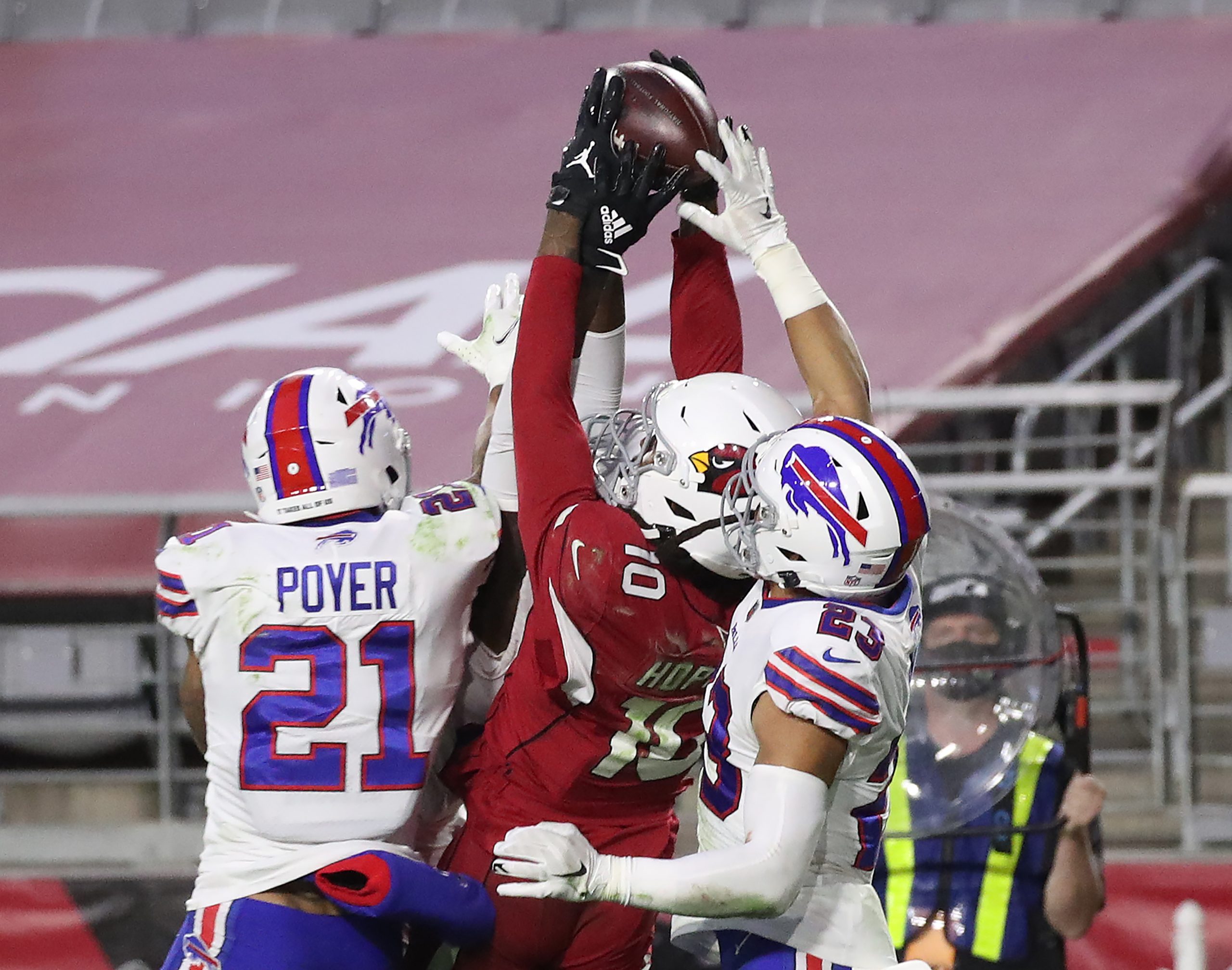 The game was down to the final seconds. Josh Allen had just led the Buffalo Bills on an amazing drive that ended in a spectacular touchdown pass to Stefon Diggs. Headlines and articles were already being written. Cardinals fans were so sad that they wanted to go out and adopt a puppy just to pet it.

Then Kyler Murray decided to chuck a prayer to his best wide receiver. Dare I say for that single moment, everyone would have unanimously agreed, the best wide receiver in the league. DeAndre Hopkins hauled in the touchdown pass over three defenders like he was Calvin Johnson on Thanksgiving. One of those defenders was the best cornerback in the NFL, in my opinion, Tre’Davious White. Everybody was quick to say what everyone thinks after a moment like that. “He is the best! DeAndre Hopkins is the best wide receiver in the NFL.” Then a week later, the masses moved on. The play was not forgotten, but the feeling of him being the best seemed to fade into the wind. History can forget legends thru time, but in the sports world, we only remember what you did for me lately.

D-Hop holds a special place in my dynasty heart. In my very first startup draft, he fell to me in the second round. I feel he is comfortably the most consistent, top-tier receiver in the league ever since. Call it bias, but when you have someone on your team, you notice how others can miss how good they truly are. Arguments can be made for Julio Jones, Devante Adams, Antonio Brown, Michael Thomas, Tyreek Hill, or even Odell Beckham Jr over the past five years. At individual moments in time that they were at one point the best in the league. For my money, look no further than a man his high school friends called “Chuck” because of all the POLO he used to wear, Deandre Hopkins. We are in the DeAndre Hopkins era, and dynasty gamers are just in denial.

The man with a sense of style hails from the town of Central, South Carolina. The wide receiver standout was a 4-star recruit (according to 247sports.com) when being sought after by the University of Clemson. At 6’1’ and 195 pounds, Deandre would have the size to take a hit and, more importantly, get back up. This durability would help D-Hop never miss a game in his college career. Hopkins has missed only one game in his career thus far in the NFL.

Wearing number 6 in either Orange or Purple, Deandre would lead the Clemson Tigers in receiving yards as a Freshman with 637 yards and would later top this mark with ease. In his sophomore and junior seasons, he would post 978 and 1405 yards (stats courtesy of sports-reference.com). These numbers are beyond solid, considering he was competing with Sammy Watkins in his sophomore and junior campaign. Scoff at his NFL career if you want, but Sammy Watkins was a college god. Their quarterback was Tajh Boyd, who would get a roster spot in the NFL but honestly wasn’t cut out for the league; it gives the statistics a more enhanced picture.

All of this college success would get Deandre Hopkins drafted in the first round of the 2013 NFL Draft. Hopkins started the run of Clemson wide receivers entering the league. He would leave “Wide Receiver U” and take his talents to Houston when they selected him with the 28th overall pick. Looking at the draft class now, it was an incredibly weak class. It’s no hot take to say DeAndre Hopkins should have been the first wide receiver taken off the board, not Tavon Austin. No more so than that, the man should have been the first pick of the entire draft. The only real arguments would be Lane Johnson, David Bakhtiari, and Travis Kelce.

The Houston Texans would already have their franchise wideout on their roster when DeAndre was drafted. That was the great Andre Johnson. It would only a matter of time before Hopkins would overtake Johnson as the best receiver on the team. Arguably, as the best Texans receiver of all time.

If there were one thing that DeAndre would need to make this ascension happen, it would be what Andre lacked his entire career, an elite quarterback. No disrespect to Matt Schaub, but he was never a top-half talent at his position, never mind elite. In 2017 Hopkins would be paired with Deshaun Watson. By that time, D-Hop was already recognized as one of the top-five receivers in the league.

The curse of B O’B

It was all a beautiful marriage and fantasy gold for those that reaped the rewards. Bill O’Brien would let his brain get in the way of a good time and traded Deandre Hopkins for David Johnson. In David Johnson’s prime, this would have been an incredibly dumb trade. Running backs break down. Their time in the league is typically less than half of the expected careers of elite wideouts. This was well after DJ’s prime and had to have resulted from some hidden turmoil in the organization. DeAndre was never a bad guy, and this was nothing more than Bill O’Brien having too much power and not enough brain cells or bare minimum football IQ. Arizona would be part of what would go down as one of the most lopsided trades in sports history, never mind NFL history.

Shining in the desert

Luckily for every fantasy gamer out there, DeAndre Hopkins, when traded, did not receive a downgrade at quarterback. Kyler Murray is on the rise in a big way. This landing spot may have been the best upgrade for his dynasty value. This season AJ Green and Christian Kirk will be getting the ancillary targets. Still, Nuk will be near the top of the target list in the NFL. If possible, we can even see Kliff Kingsbury wises up and sends DeAndre deep again now that AJ Green is in town.

Last season was a strange year for DeAndre Hopkins route running. Hopkins wasn’t hurt, but for some reason, the Cardinals were using him in a limited capacity in terms of the depth of his routes. He had consistent short slants, which is not how DeAndre has made his bread and butter in the league. He is, for my money, an easy top-five route runner in the league. If used correctly, he can have a chance at a 2000 yard season with Kyler Murray. When you get the number of targets that DeAndre does, and you have Kyler Murrary about to hit his third season, which is notoriously a huge year for quarterback development, you have the chance for something special. There is a distinct possibility that Kliff’s days are numbered. That might not be the worst thing in the broad scope of the value of DeAndre Hopkins down the road.

This will be the second year that the duo will be playing together. Hopkins and Murray have a chance to be this year’s Aaron Rodgers and Devante Adams. What I mean by that, of course, is that they can be the best stack in the league, possibly resulting in a Kyler Murray MVP season, but more on point, we are looking at DeAndre Hopkins ready to be the Wide Receiver 1 in 2021.

The question is, how are you getting DeAndre Hopkins on your team? I have the answer. Wine and dine with the owner. Take them somewhere fancy. Tell them what a great team they have. Then send Terry Mclaurin and a 2022 1st round pick. Maybe that isn’t their speed. That’s okay. Playing hard to get should be a challenge anyone is up for. Send them DK Metcalf and see if you can get a throw on, “since they are winning the trade.”

I personally have Nuk ranked as my WR4 in PPR dynasty rankings. One spot ahead of Tyreek Hill and one spot behind CeeDee Lamb. With guys at the top, it comes down to minor things. For CeeDee, his age and playing with Dak, who is also very young, is such a huge key to his value. He is nowhere near the upside of DHop or Hill the next few seasons, but he will be close, and eventually, maybe this will be his league. Although Tyreek Hill is younger than DHop and plays with Patrick Mahomes, who is absolutely the best quarterback in the league, Tyreek’s injury ailments give me caution. The guy is very tough and plays through a lot at times, but he is no dog like DeAndre is.

Every dynasty manager values players differently. Age plays a significant factor in our process of when to get guys and when to get rid of them. When a receiver hits 28 in dynasty, people slam the panic button. It’s the age apex when the receiver’s talents hit an absolute peak value. I’m just saying we ride the wave. At 28 years old, this is no time to get bored of Deandre Hopkins’s amazing talent. This isn’t Lebron James. We don’t need to look for arguments every year why he isn’t the best in the league. This is DeAndre Hopkins, a walking hall of fame wide receiver that is the best wide receiver in the National Football League. This is his time. Let us just appreciate greatness.