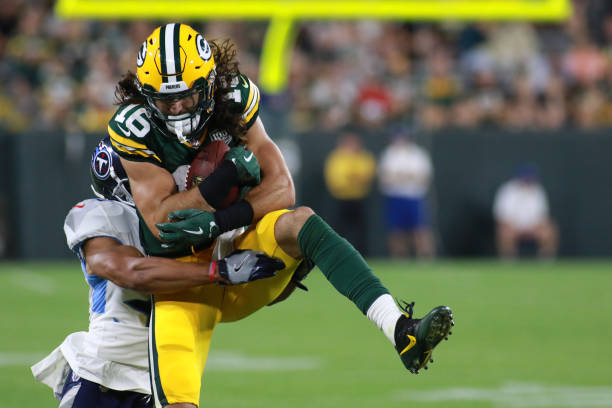 After attending the University of Wisconsin-Whitewater, the cousin of Joey Bosa spent a couple of years on the practice squad of the Bengals and Patriots, before making his way back to Wisconsin. Jake Kumerow arrived on the Packers practice squad on December 26th, 2017.

Since then, the local kid has become a favorite of the one and only, Aaron Rodgers. That is something that intrigues any fantasy owner. The 6’4” 210-pound receiver has earned the trust of his quarterback. After a series of disappointing practices from the Packers’ rookie WRs (Valdes-Scantling, ESB, and J’Mon Moore), Rodgers stated, “I was telling Jake the other day, I watched a play that he was in on, he ran a certain route, he was open on the route. I wasn’t the quarterback, we came back three practices later, same call, same coverage, same player — him — running the route, and he wasn’t expecting the ball. I said, ‘Hey, I watched that rep three days ago. I saw this play and I reminded myself at the time, if we had that opportunity again, where to go with the football.’ I said, ‘When you’re out there, I’m coming your way.’ I have confidence in him. He’s in the right spot all the time, he makes contested catches, finishes the right way. He practices like a pro.”

There’s no doubt Kumerow faces an uphill battle to make the Packers roster, considering they have Adams, Cobb, Allison, ESB, J’Mon Moore, and Valdes Scantling on the roster. However, when Aaron Rodgers is outright praising you, you have a chance.

To further make things interesting, in the Packers’ first preseason game this year, Kumerow caught a 52-yard TD pass against the Titans. At the same time, Rodgers looked visibly excited on the sideline with a giant grin spanning his face.

Kumerow faced the struggle of any small school prospect coming from Division 3, and it’s no surprise he’s spent quite some time on practice squads. However, that didn’t stop 20+ scouts from evaluating him as a prospect following his senior season. That’s to be expected when you boast a stat line of 77 receptions, 1331 yards and 19 touchdowns in your Senior year.

What is most exciting about Kumerow is his size. He will make a fantastic red zone target alongside Adams and Jimmy Graham on an offense that could easily have 40+ receiving TDs next year. However, the concerns with D3 products is often the same. Playing against weaker competition always leads to doubts that they can produce against the NFL’s best. There’s also the fear that their technique and route running isn’t as refined without elite coaching.

I’m certainly not under the impression that Kumerow will instantly come in and be a WR2. There’s an obvious chance that he doesn’t even make the final roster. However, he’s free in most dynasty leagues and if injuries hit the Packers like they usually do, the 3rd WR in an Aaron Rodgers offense certainly can have some value as a bye week fill in. If his connection with Rodgers grows, we’ve seen crazier success stories in the league.