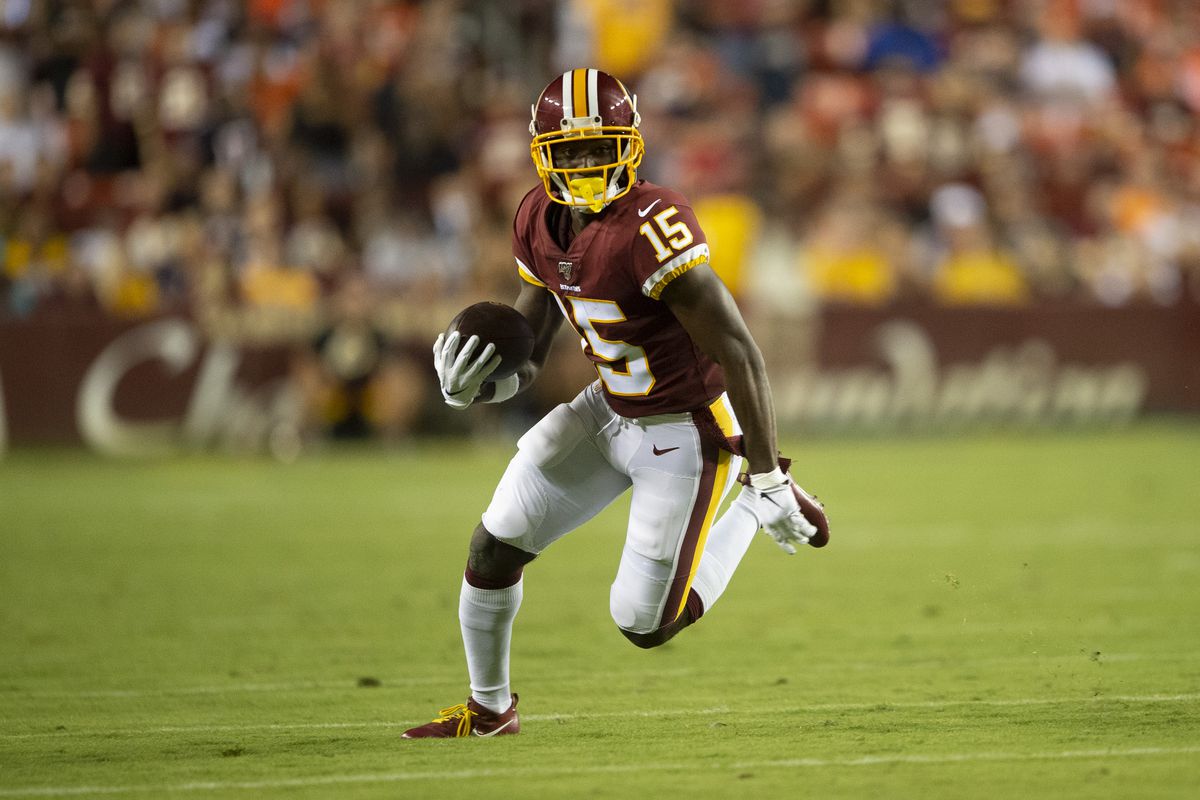 Are you the kind of dynasty owner always looking for who’s next? Scouring the league for anyone who might have value? Looking high and low for that diamond in the rough? Searching the wire inhabited by UDFA’S, has-beens, and never-was’? Second-year WR Steven Sims Jr. could be the guy you’re looking for…Here’s why!

Sims Jr. went undrafted in the 2019 NFL Draft out of Kansas, eventually signing on with Washington. With the build of a typical slot receiver, Sims stands 5’10” 190lbs.  At Kansas, Sims posted a surprising 29.8% dominator rating with a breakout age of 19.4 (80th percentile) per playerprofiler.com. Promising metrics for an undrafted receiver. Admittedly the rest of his profile left a lot to be desired. Did he do enough in his rookie season to lock down the slot/second receiver role moving forward?

Like any rookie, Sims struggled to get on the field early. While watching Washington or obsessing over every play that didn’t go to “my guys” I’d occasionally catch a glimpse of Sim’s potential. Like in Week 5 vs. New England when he showed speed and burst to take a carry 65 yards to the house finishing the week at WR 21(PPR). I didn’t pay it too much mind even though he played 58 percent of the snaps that week. I wanted to see more consistent playing time. The coming weeks were more of the same.

Sims continued to flash showing the ability to separate in the short area and showing long speed returning a kick 91 yards to the house. The undrafted rookie continued to earn reps showing off his playmaking abilities. Finally, Sims got a chance to play. Playing at least  58% of the snaps from weeks 13-17.

The first two weeks were nothing special scoring 5.9 and 8 PPR points seeing 4 targets and 7 targets. Weeks 15,16,17 were surprisingly impressive finishing as WR 27, 4, and 14. Chase the targets they say. Sims caught 5 passes on 11 targets for 45yds and 1td vs. Philly, then 6 for 64yds and 2tds  on 10 targets vs NYG, and finally without Terry Mclaurin, Sims caught 5 balls on 8 targets for 81 yds and a score. Touchdowns are difficult to replicate but the rookie showed the capability to get open in the endzone. In those six weeks, he played consistent snaps finishing as WR 32 over that span. At the end of the season, we look for guys that are showing signs of life. Guys who can potentially breakout or give our team some value. Steven Sims Jr. showed a lot of potential in his rookie season. Sims has a great shot to be the second receiver behind Terry Mclaurin in the Washington Offense.

There are some concerns going into Sims sophomore season. For starters, Washington brought in former Carolina head coach Ron Rivera. That move alone makes me wonder if Sims finish will hold any weight with the new staff. Did he do enough as a rookie?  Maybe Washington is posturing about taking Tua. What if they do? Who will play QB? It certainly can’t hurt to upgrade at QB. With Dwayne Haskins at the helm, Sims saw quite a few targets. Was Haskins looking for him? Was there chemistry there? Lastly, does Washington address the position in the draft? Certainly, this rookie WR class is deep. There is some risk to consider. While these questions are concerning they can also be used in an attempt to lure Sims away from his owners for minimal risk.

There are many reasons to be excited about Sims heading into year two. He’s showed enough production to be the slot/second receiver moving forward. There is no doubt Terry Mclaurin is the alpha on this team. Mclaurin will garner the attention from the defense leaving room for other pass catchers to work underneath. The good news is Sims produced with and without Mclaurin on the field.

There is value in finding second-year receivers who provide your team flex appeal floor with WR 2 upside. Sims is that guy. Sims is a poor man’s Mecole Hardman. While Sims is not Hardman fast he does appear faster than his 4.61 40 time suggests. Sims is the perfect guy to work as a throw-in piece. Giving up a mid 3rd round pick (1QB PPR) for him post-draft where Washington does not make a splash at the receiver position. Regardless Sims can still be the slot receiver. The time to strike is now. If Sims is your guy but already owned approach owners with the aforementioned concerns. Try to buy low before the draft. Low-risk high reward. What say you?

Houston We Have a Problem: Nuk Heads to the Desert
Fantasy Football Wins Above Replacement: The Theory