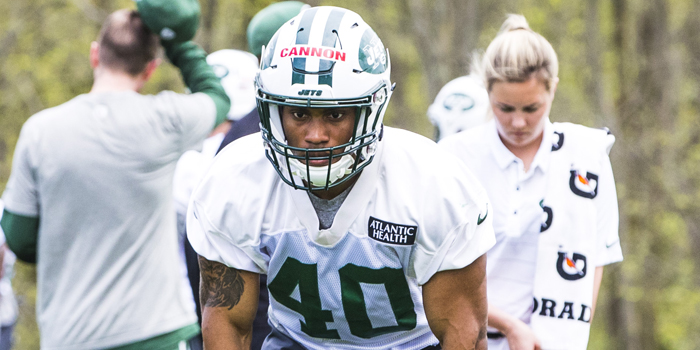 I really liked Elijah McGuire this season. I thought he was going to shine and eventually see a substantial share of the backfield touches for the Jets. So, when McGuire went down and required surgery for a broken foot, I was extremely disappointed. As outrageous as it seems, his coaches were comparing him to LaDainian Tomlinson.

Part of the reason for my excitement is because I have absolutely no faith in the abilities of Bilal Powell and Isaiah Crowell. With McGuire expected to miss all of the preseason and at least a few weeks of the regular season, there is a gaping hole in the backfield. I believe this will be filled by the Jets’ 2018 6th round pick, Trenton Cannon.

The 5’11, 185 pound running back enters the league from Division 2 Virginia State. Coming into the league at 24 years old, Cannon is a classic case of a Div 2 player that dominated at the lower level and has a chip on his shoulder to prove that he can compete and surprise at the next level. Cannon said, “I knew it wasn’t going to be easy. I knew it wasn’t going to be that tough for me, like everybody expected, coming from Division II. There are a lot of Division I guys out here, and Division I is supposed to have the better athletes. I’m just showing them that coming from a smaller school, we can play, too, at this level. Football is football. I’ve been playing all my life. At any level – high school, college – my speed has been helping me the same way.”

Cannon began his career at Shepherd University but transferred to Virginia State after one year. Cannon hit the ground running as soon as he got to Virginia. In his first year, 174 carries, 1,178 yards, nine touchdowns; nine catches, 182 yards, and 2 touchdowns….in only 10 games. He followed that up with 1,214 yards and 18 touchdowns on 168 carries in year 2, and 1,638 yards on 212 totes, scoring 17 times in his final season.

Cannon’s value comes in his athleticism. He posted a 38.5-inch vertical leap and 10-foot-9 broad jump. He also ran a 4.40-second 40-yard dash with electrifying 1.49 10-yard split.  His 35 TDs over his final 2 college seasons highlight his home run ability. Things got off to a good start for Cannon in the Jets’ first preseason game. He had 11 carries for 40 yards, adding 3 receptions. Additionally, during the broadcast, it was mentioned that OC Jeremy Bates has created a few packages specifically for Cannon.

A big red flag for Cannon is his frame. At 185 pounds he doesn’t have the ability to break away from contact and pick up additional yardage. Therefore, he’s not too valuable in the trenches.

I believe Cannon holds value as an end of the roster stash in PPR leagues as opposed to standard scoring until McGuire comes back. The Jets are clearly in rebuild mode and if he impresses with McGuire out, there’s no reason why they won’t continue to give him snaps over the likes of Bilal Powell, given Powell’s age. See if he’s on your waiver wire and keep an eye open to see how he continues to perform over the preseason.