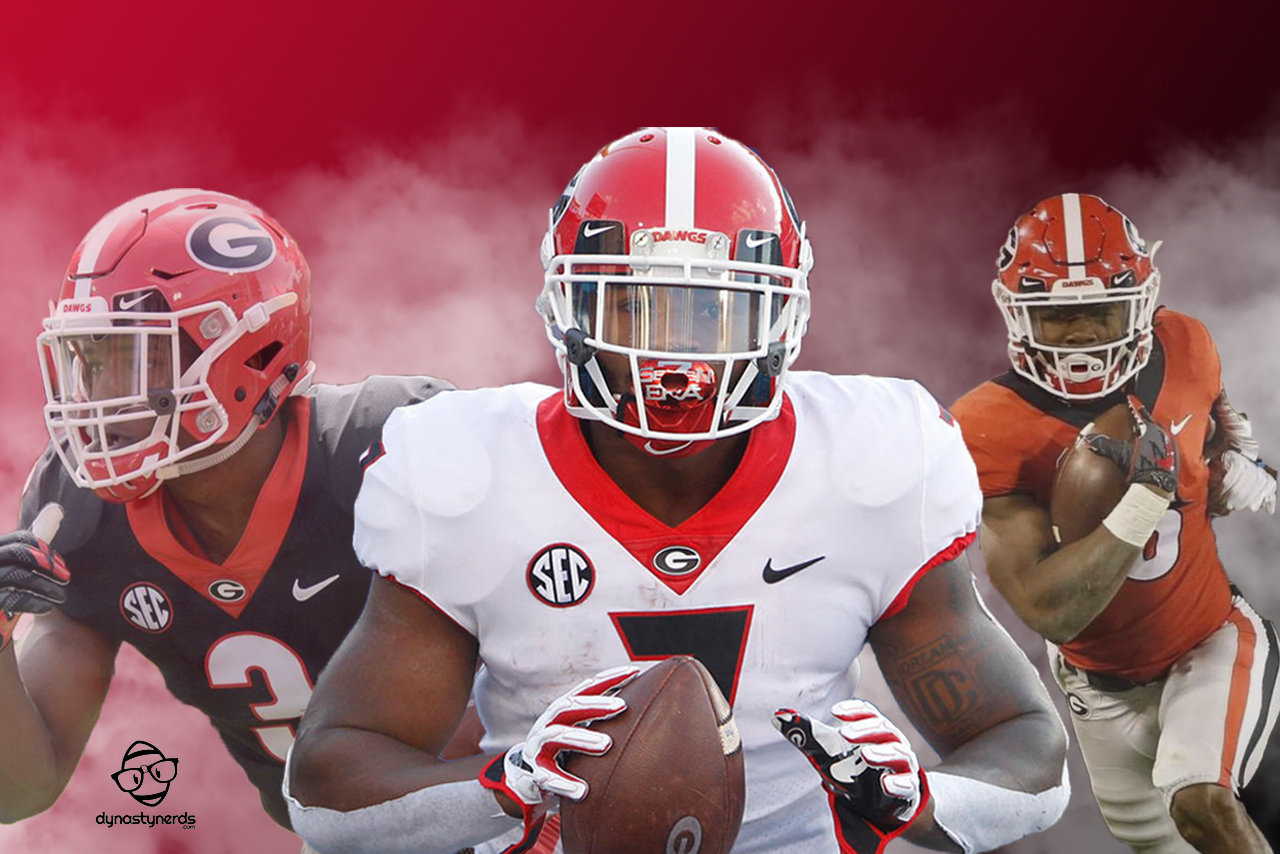 As excited as we are about the upcoming 2020 class prospects, DEVY leagues are much deeper than keying in on the next year’s group of fantasy players. Having the knowledge of who’s potentially going to make the leap from college to the pros two, three and even four years in advance is the name of the game. The pool of players in high school athletics is a deeper ocean to navigate compared to college and the pro game; given the sheer number of high schools across the country, recruiting services, and coaching changes at the collegiate level. Lucky for you, we have you covered. This article is going to break down the Georgia Bulldogs backfield as they seem to have taken the crown as the new RB-U.

Todd Gurley, Sony Michel, Nick Chubb, Elijah Holyfield are the most recent dawgs to turn professional – and now comes another wave of potential fantasy gold by way of: D’Andre Swift, Zamir White, and James Cook. Swift and White were rated 5-start prospects and Cook was a 4-star according to 247 recruiting. Let’s take an early look the potential 3-headed monster of DEVY gold residing in Athens.

Swift did not waste time getting to work when he stepped on the scene in Athens as a true freshman. He shared a backfield with first-round draft pick Sony Michel and Nick Chubb who was a high second-round pick; both have showed flashes of becoming top NFL running backs. Swift more than held his own amongst those Georgia legends.

He is only 5’9” but is solidly built weighing 220 pounds. He is a very power runner but has next-level speed and agility. His short area quickness and ability to make people miss in tight spaces reminds me of prime LeSean McCoy. He is a patient runner, with one of the nastiest “dead legs” in college football. He has already shown the ability to be a true weapon out of the backfield in the receiving game.

While not receiving a full workload could be viewed as a negative, I’m telling you now, this is probably what I like most about the RB situation in for the Bulldogs. Georgia has a surplus of talent in the backfield and much like Alabama over the last 5 years, they have the luxury of being able to rotate RBs and not lose production on the field. Dynasty owners should be excited about this because it will keep the wear and tear off of these guys going into their respective drafts. To put Swift’s touch count in context, David Montgomery, who was drafted in round-three of the 2019 NFL draft had 279 combined rushing and receiving touches in his Junior season; Swift’s combined rushing and receiving touches over his freshman and Sophomore seasons are 293. There is absolutely no need for Georgia coaches to run one back into the ground when they have so many capable weapons.

Barring injury Swift is a locked and load top prospect for the 2020 class and is most certainly accounted for in DEVY leagues, but for those in DEVY start-ups, Swift would have been my unquestioned 1.01 in 2019 and no later than the 1.03 in the 2018 class.

White did not play as a freshman in 2018 due to a torn ACL he suffered in fall camp covering a punt. He was the consensus #1 rated running back by 247 sports and was one of the highest graded running backs in the last five classes; trailing only Najee Harris, Alabama starting running back and Leonard Fournette, of the Jacksonville Jaguars. White earned the nickname “Zeus” in high school because of how physically imposing his body stature is. His legs look like tree trunks, he runs with power, speed, vision, elusiveness and he’s nasty. White played in 47 varsity high school games from his freshman to his senior year and racked up 7,169 yards and 119 TDs averaging 152.5 yards per game. As a sophomore, he ran 260 times for 2159 yards and 41TDs. He truly looked like he was on another level on each and every touch.

White was a limited participant in spring ball practices because of his injury, but all signs point to him being ready for fall camp and the opening game. Georgia may take it slow with their all-world running back and have amazing depth at the position which will allow them to ease him into action if need be. With D’Andre Swift locked into the number one role and James Cook poised for more work in his second season, this backfield will be a nightmare for Georgia opponents this year, and for the SEC for years to come.

I am really excited about the prospectus of James Cook. Cook is the younger brother of former Florida State All-American and now Minnesota Vikings starting running back Dalvin Cook. He was rated the #3 running back all-purpose back coming out of high school in 2018. He is not as imposing a figure physically as Zamir White, but Cook has put together well and is fantastic with the ball in his hands. He probably the fastest of all three backs and is very smooth with legit burst. Watching him play I believe he is more explosive than Swift. He is extremely fluid with his cutting ability and short-area quickness and I don’t know if it’s the #6 jersey number he wears but he looks like an Alvin Kamara clone.

As a true freshman, he was able to see action in 13 or 14 games which is impressive giving who Georgia had in that backfield, and the fact that Cook arrived on campus late as a summer enrollee; putting him comfortably behind Swift and Elijah Holyfield. The loss of Holyfield will open up opportunities for Cook to compliment Swift and potentially White. Depending on how Georgia decides to work White into the rotation I can see a situation where Cook carves out his own role as a consistent player on that offense regardless, that’s just how talented he is. During the spring Cook participated in practices and by all accounts looked good after recovering from off-season ankle surgery. We still have a couple of years to wait on Mr. Cook’s inevitable transition to the NFL, but for DEVY leaguers, looking ahead is the name of the game, and James Cook is a player who should be on every DEVY league radar heading into 2019.

Why You Should Play Devy