Could Deion Smith be yet another elite LSU receiver? Find out here with @ekballer 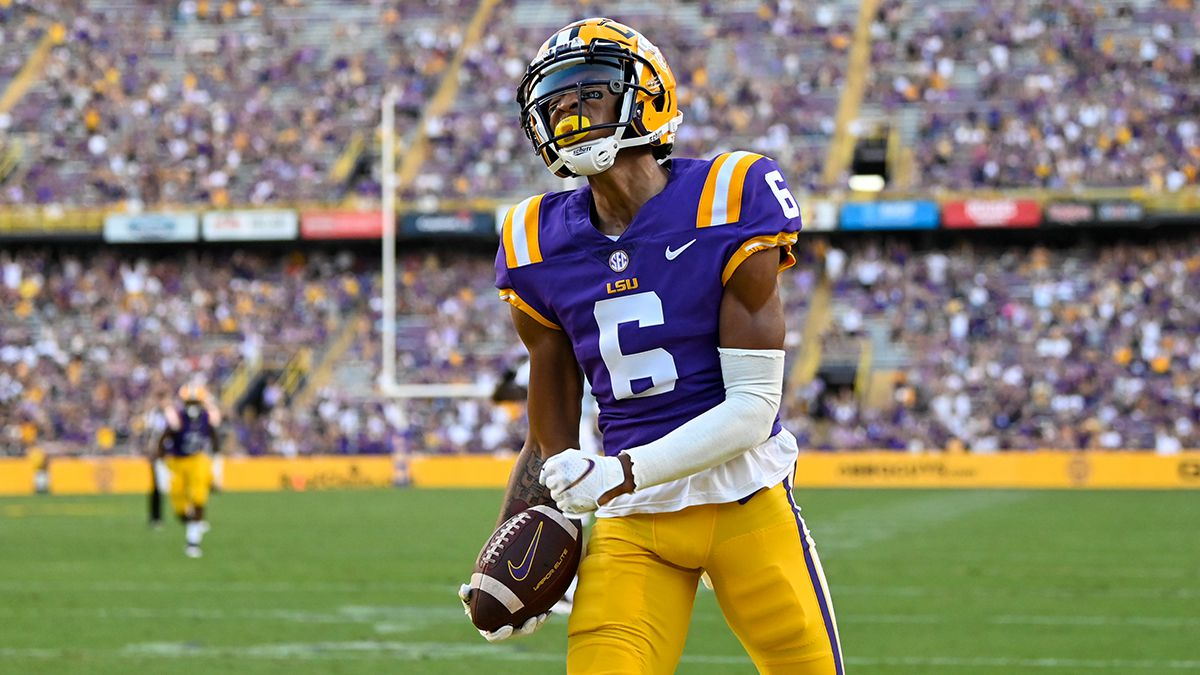 Over the next few months in “Freshman Phenom” we’re going to look at some breakout devy stars playing their true or RS freshman seasons.

Deion Smith, hailing from Jackson, MS, was the #9 WR in the 2021 recruiting cycle. He was part of a ridiculous receiver class for LSU, featuring not just Smith and the #11 ranked Chris Hilton but also Brian Thomas (#13), Malik Nabers (#40), and TE Jack Bech (#57 receiver), who deserves a spotlight of his own.

Though Chris Hilton’s elite athleticism had some ranking him as the superior recruit, Smith’s RAC ability and downfield skills made him a popular choice in c2c rookie drafts this summer.

We’ll start with the clip you’ve definitely seen, as Smith demonstrates “Mossing” for the new generation:

Yeah, Deion Smith is THAT DUDE. Concentration. Ball skills. Bully-ball. He adjusts beautifully to this underthrown pass- if Max Johnson placed this right it would have been a no-contest over-the-shoulder TD in the back corner- and just rips the ball away from the corner. Gimme that.

Here’s his 2nd TD grab of that evening:

Again, Smith shows great adjustment and ball-tracking. He has outside leverage on the DB, again, but makes an excellent, harder-than-it-looks adjustment back to the inside to let this one drop into his hands. He had already won his route handily, though Johnson couldn’t quite get enough air under it to drop it on the boudary.

Smith is the guy who makes his QB look good, not the guy that needs a perfect ball.

As pretty as those tuddies were, I think this is my favorite clip from the game:

This is what caught my eye in Smith’s HS tape: he’s a ninja after the catch. The DB had him dead to rights and literally winds up face-first in the dirt as Smith shadow-steps almost before he hits the ground. The agility is impressive, as is the awareness to have located the defender in-air and already have a plan to win. He makes at least 5 Chippewas look foolish on this play.

I see a lot of Ceedee Lamb in Smith’s play, and I like it.

It’s easy to helmet scout here, or to get too excited expecting the next Jefferson / Chase / Marshall just to fall in our laps. LSU has been generous to dynasty players, giving us two of the best WR prospects we’ve ever seen in back-to-back years, and Boutte looks to be as good as either of his predecessors.

With expectations tempered, still, it’s tough to deny that Smith is going to be a stud.

Is he going to be Ja’mar Chase or Kayshon Boutte? It’s unlikely. But, with Boutte about to miss the rest of the season, it seems like we’ll get a bit more of an extended look at Smith in the next few weeks.

This may be your best chance to trade for him After his big blow-up in week 2 Smith has been quiet, catching an ugly 4/14 passes in the past 3 weeks. C2C managers that aren’t already Smith truthers might be starting to forget the fireworks of a few weeks ago, seeing those empty stat sheets from the most recent weeks, and they may be becoming pliable.

You’re not getting him with a lowball. He’s a top 10 recruit at his position, and he’s flashed his talent already in his first few games as a Tiger. But it’s certainly worth targeting him in trade offers. I’ve been trying to get him, but I’m wrestling with truthers that value him even more than do I, and I’ve not been getting much done.

To me, Smith is the perfect guy to get added to a package, and he shouldn’t cost nearly what a Boutte or JSN will. If you are sending a productive NFL receiver- say a Robert Woods or Cooper Kupp type- you should be able to get back a return like JSN or John Metchie, Deion Smith, and a good freshman pick or an NFL rookie that hasn’t broken out yet like Terrace Marshall or Dyami Brown. That’s a deal that helps both sides if one team is reloading and the other is pushing for a ship.