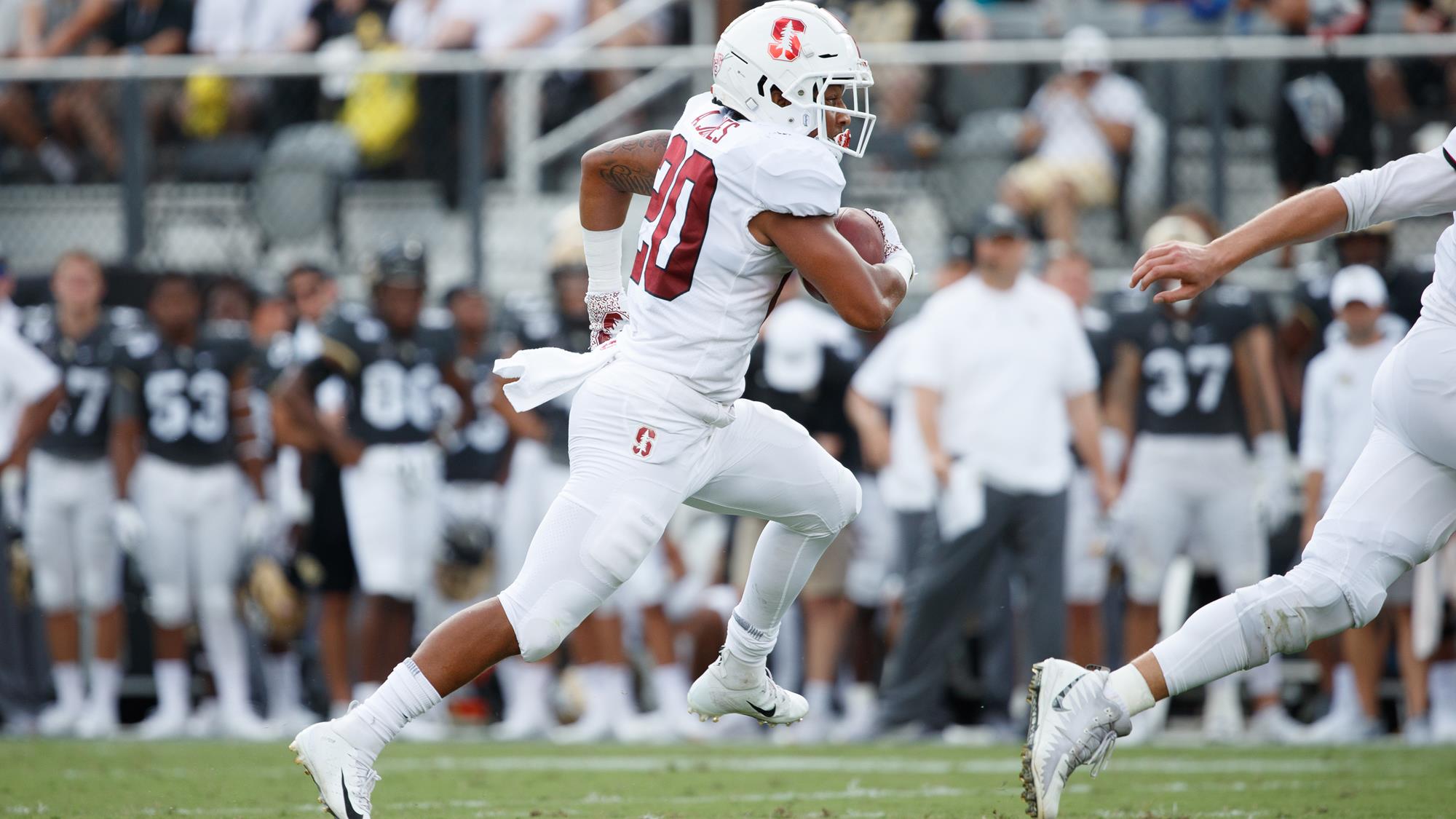 In a season filled with historic rushing performances (see: Patterson, Williams & Carter, etc) it’s been easy to overlook a lot of backs that haven’t had that jaw-dropping game. There are a bevy of guys in that un-hyped category that are well worth your attention, and Stanford’s Austin Jones is right at the top of that list.

His freshman year he was a rotational player, seeing just 59 touches, but he took over a workhorse role in 2020, seizing a healthy 63% rush share and turning it into 699 total yards (over 115 / game) and 9 TDs.

Jones is creating a draft-worthy production profile. In 2020, he racked up 60% of Stanford’s rushing TDs, 69% of rushing yards, and a 14% receiving share. Accounting for 28% of Stanford’s total yardage and 40% of the team’s TDs, Jones produced a solid 32% Dominator rating, making him a sophomore breakout.

Jones has some traits that I like quite a bit. His elusiveness jumps off the screen on nearly any given play:

In that play, the scheme and blockers have done their jobs, getting him one-on-one with a LB. Stanford has a great running offense, so you’ll see this a lot; you’ll also see Jones winning confrontations and creating yardage with short-area quickness, power, and skillful timing.

Here’s a delay route on 3rd-and-6 where Jones creates at least six yards and the 1st on his own:

Again, he shows some nice anticipation, beating the first the LB with a quick lateral move and a stiffarm, then powering through a couple more tackles for a longer gain.

It’s worth noting that all of these clips are against Washington, a top-20 defense for 2020. He’s not just beating up on bums here.

This next play only went for four yards, but it highlights Jones’s vision and his patience, two of his best assets. You can watch him read the play as it develops; he moves to the outside when his primary gap isn’t there, then cuts back to the inside after the linebacker commits to pursuit outside. It’s a good run.

I love his footwork here as well; he’s efficient and balanced as he’s looking for a gap, leaving him ready to accelerate when he sees his hole. This was on 1st-and-10; these are obvious running downs for Stanford, and he consistently has 8 or 9 men in the box, yet produces. I like his ability to finish as well- he’s no power runner, but he’s willing, and he’s always falling forward for the last few yards.

He’s got the vision and burst to run successfully between the tackles despite lacking top-end size or speed. I’m guessing he doesn’t test as an elite athlete, but he’s fast enough to rip off chunk gains, even if he’s not a home-run-threat.

Jones is good in the red zone, and he’s a good goal-line back as well. He reminds me of Aaron Jones in this way; he’s not running dudes over, but he uses his diverse skill set to find his way through defenders into the end zone.

He doesn’t quite get there on 1st-and-goal one this toss but he beats three defenders and comes damn close. He might not have the power to drag guys, but he rarely gets stopped dead.

It’s more of the same at the goal line. He’s not going through guys, but he utilizes his blocks well, sets up the defenders, and finds a way across the paint.

Recent history has shown us that college passing game work doesn’t necessarily translate to the NFL (see: Josh Jacobs, Jonathan Taylor). But Jones is a plus receiver with good hands, smooth transitions, and good instincts at finding space.

When I first went though Jones’s film, it didn’t leave a super strong impression on me. But going back through and watching the nuances of his game has gotten me more excited for his future.

I’m still not certain he translates, as NFL LBs and DL are going to be faster and sharper, and his crafty play might not be enough to overcome his athletic limitations. Unless he tests better than I anticipate, he could have a hard time grabbing high draft capital, and his size and receiving chops could pigeonhole him as a scatback.

But the vision, anticipation, and crafty play Jones displays are some of the more valuable assets a back can have. A sophomore BOA and 32% dominator both have some value for RBs, though he didn’t hit the 2 yards / team play that is considered by some to be important.

I think Jones’s most likely outcome is day three capital, unless he really blows up next year. He has 3-down potential but he’s likely to have to fight for reps or start as a committee member.

I’m more interested in Jones in a C2C than I am a regular devy league. He’ll produce for you next year, and, if he gets a return-to-school grade, he’ll be an asset his senior year as well. And he’s a little under-the-radar still unless your leaguemates watch a lot of PAC-12 football.

Jones isn’t a guy I’m shipping heavy assets for, but he’s definitely worth owning if he can be acquired as a minor piece in a bigger deal. There’s no hype at all around him so he shouldn’t be tough to pry away. Ask for him as a throw-in or as a part of a college package if you’re making moves to win the college side next year.

Stanford does obviously offer some pedigree- we’ve seen backs like CMC and Bryce Love catch the eye of GMs in recent years.- so I’m not counting Jones out- but he has an uphill battle at this point to make a splash in The League.