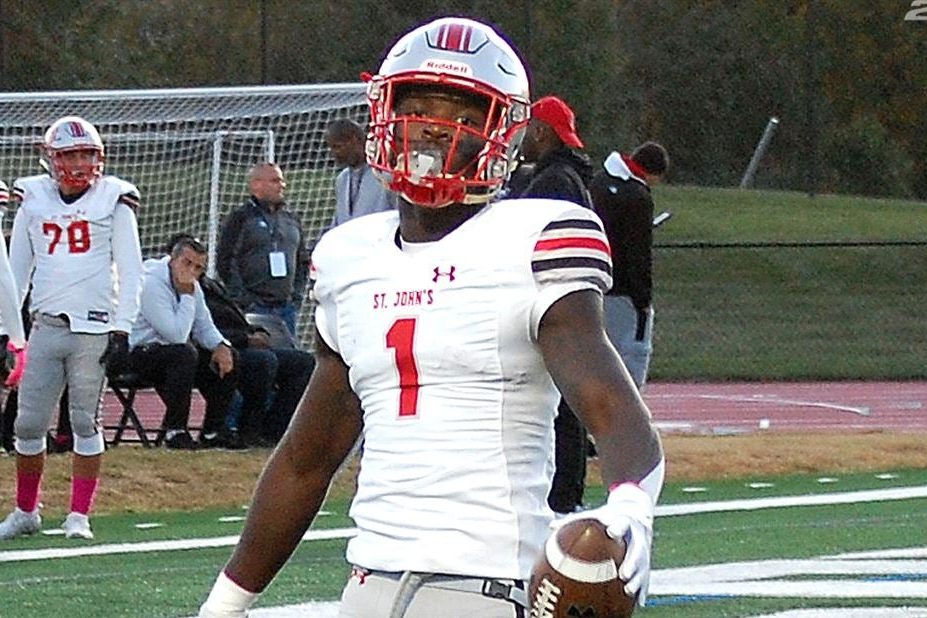 In this column, I’ve been focused on ’21 and ’22 draft-eligible players that are on the rise, but this week I’m pivoting to talk about a true freshman, Rakim Jarrett.

The Taulia-Tagovailoa-led Terrapins have been a pleasant surprise. After dropping their first game of the season to Northwestern, they’ve put up wins against decent Minnesota and Penn State squads,

Rakim Jarrett is a 5-star recruit from St. John’s in Washington, DC, and the fourth-ranked receiver in the class of 2020. At 6’0″ and 208 lbs as a freshman, Jarrett has the speed, hands, and moves to make an impact in the NCAA and the NFL.

Taulia was cooking this weekend, but it was Jarrett that brought the burn on this TD catch:

He makes the catch and just pulls away from the DBs. Pure jets. You can’t teach speed, and Jarrett has it in spades.

But he’s more than a set of wheels, as you’ll see on this little stop route:

He sits down in the zone and then goes to work after the catch. His comp on 247 was Deebo Samuel, and you can see that here; he beats the first tackler with agility and suddenness and then fights through a couple more tackles for extra yards.

We have a hands check here:

The ball is high and hot, but he extends upwards and plucks it down, and holds onto it through the tackle. It’s a nice route and a nice grab.

Still, these are the plays that everyone will remember from this game:

No, it’s not the same play. It’s another TD on a slant. The replay shows his route; you can see that it’s a crisp, sudden break to create separation and stack the DB, then he hits the turbo and is gone.

Well, unfortunately, this week killed your Jarrett buy window in a C2C. In deeper leagues, he was definitely drafted in the startup or the 2020 freshman draft, and I’m sure his price went up. If you’re buying, you might want to wait for a down week or two.

He’s the kind of guy that will good target when you’re rebuilding on the NFL side and looking to add talent on the NCAA end. He’s not going to cost nearly what a guy like Jalen Waddle or Tylan Wallace will, and he’s showing signs of elite talent. If he keeps on his current path, he’ll put together a freshman breakout, which is awesome in an analytical profile. The tape obviously agrees: Jarrett is a stud in the making.

Make him part of a bigger package or trade for him straight up with a declining or marginal asset (Jerrick McKinnon, Jimmy Graham, etc).

In devy, it might be a little early to grab him, but it’s not a crazy idea. We’ll see other guys emerge from this class over the next two years but it looks like Jarrett may well be a top-5 receiver in ’23. He’s definitely a name to highlight and keep tabs on going into next year.

Sale of the Mac?: A Midseason Buy/Sell Analysis
As One Journey Ends A New One Begins: The Tragic Medical End To Journey Brown’s Playing Career