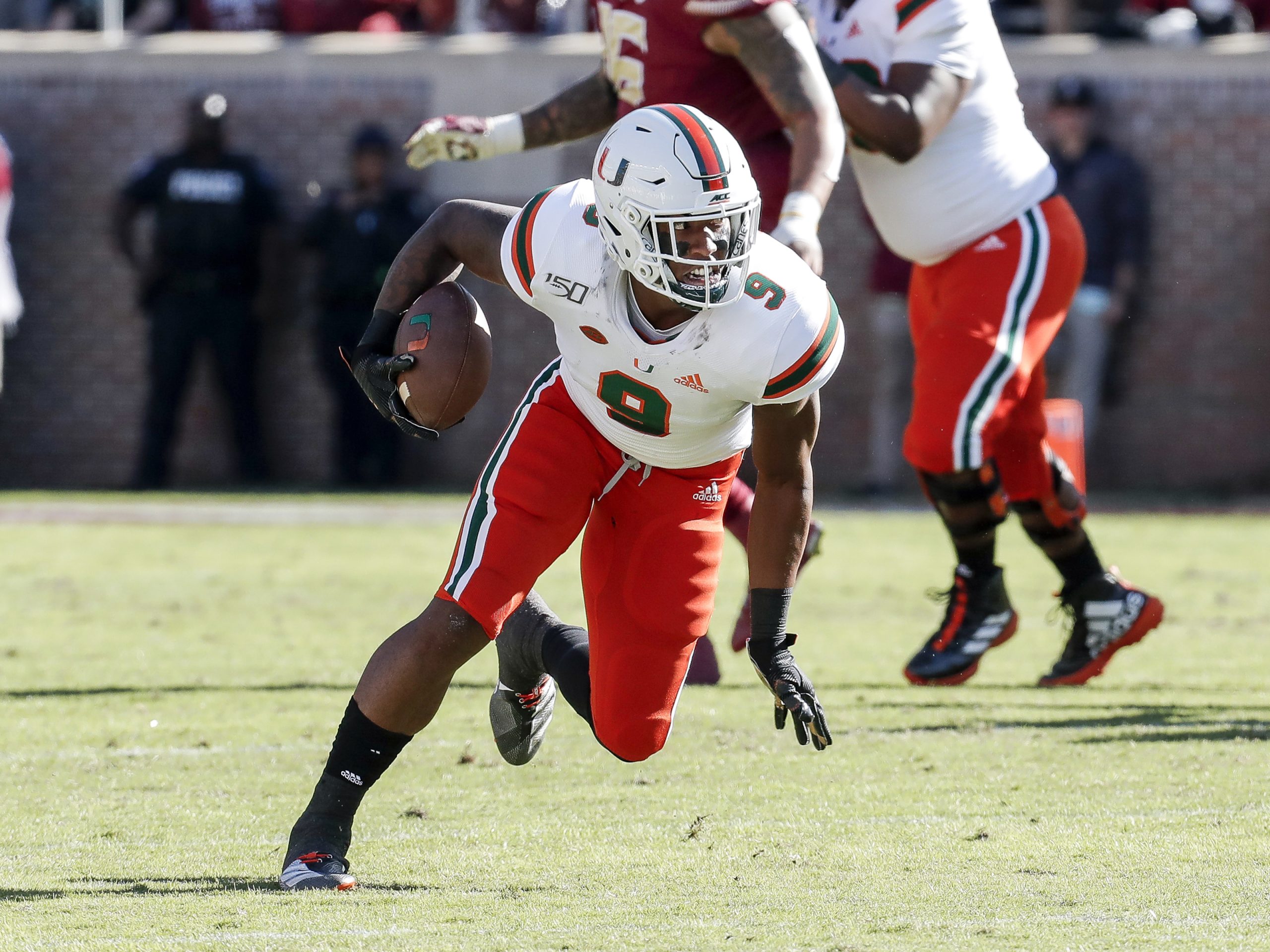 This week, the Devy Dose is turning our spotlight to one of the “Big Three” tight ends of the 2021 draft class, Brevin Jordan.

The top-ranked TE recruit in the 2018 cycle, Jordan needs no introduction to the experienced devy or CFB fantasy football player. If you’re new to the devy realm, Brevin Jordan is a name to know.

That doesn’t sound impressive, but the yardage total nearly matches Noah Fant’s SO season, and it’s more than Travis Kelce put up in any season before he was a SR.

Jordan’s clearly planning on building on those numbers in 2020. He announced this to the football world with a 7 catch, 120 yard, 2 TD outburst against Louisville this past weekend, displaying the traits that will make him a draft darling and earning our Rising Star for week 3.

This might have been his most impressive play of the day:

The athleticism he displays here- hurdling the DB and then laying out for the end zone- is one of the things that makes Jordan such a stud. Miami often uses him on screens and close to LOS routes and lets him work after the catch, and he excels in that role.

Here’s another nice example of Jordan’s YAC ability, this one coming in his first reception in the game.

He gets upfield fast and seeks out contact, trucking the DB for extra yards. It’s clear the Louisville players were not enthusiastic about tackling him here.

Brevin’s not limited to LOS routes. His speed, hands, and ball tracking make him a threat downfield as well.

The DB blows coverage here- it looks like he was expecting help over the top- but Jordan is ten yards downfield before his hapless defender realizes what happened.

But Brevin Jordan is more than just an athlete; he’s a reliable target in all areas of the field. D’Eriq King finds him again and again in 3rd-and-long situations and is not let down.

I love the fight to get the first down here; Miami should have been punting on that next play, but Jordan extends the drive with his agility. It’s the sort of play we see Travis Kelce make every Sunday.

Here’s another high-pressure play, this one 3rd-and-6 from UAB’s 33 yard line.

He looks pretty sharp coming out of that break for a 245-lb man. I love that he can run an array of routes and work in all areas of the field; Jordan is a diverse weapon. He’s not just running seam routes and catching jump balls in the end zone.

Through two games, Jordan has a 21.4% target share and he’s scored 50% of his team’s receiving TDs. On-pace stats are generally foolish, but if he maintained his 85.5 YPG average over a full-length season, he’d smash the 1000 yard mark.

If you’re in an existing devy league, Jordan is already owned, and he’s going to be nearly impossible to pry away from his owner. If I’m in a C2C and I’m rebuilding, he’s exactly the type of target I want to be trading for. You’ll have to offer a useful NFL RB or a similar player.

If you’re in a startup, grab this man ahead of his ADP. (he was averaging 69th overall in July campus-to-canton startups).

The impact of an elite TE in fantasy football is hard to overstate. Check out Jeff Henderson’s Wins Above Replacement articles for an explanation that’s better than any I can string together for you here; but, in short, the positional advantage of a high-end TE is fantasy gold.

As always, thanks for reading! See you all this weekend with more Devy Dose- have fun with the first week of the SEC!