Come along with @ekballer and the Devy Dose as we break down week five’s need-to-know devy star, Kyle Trask 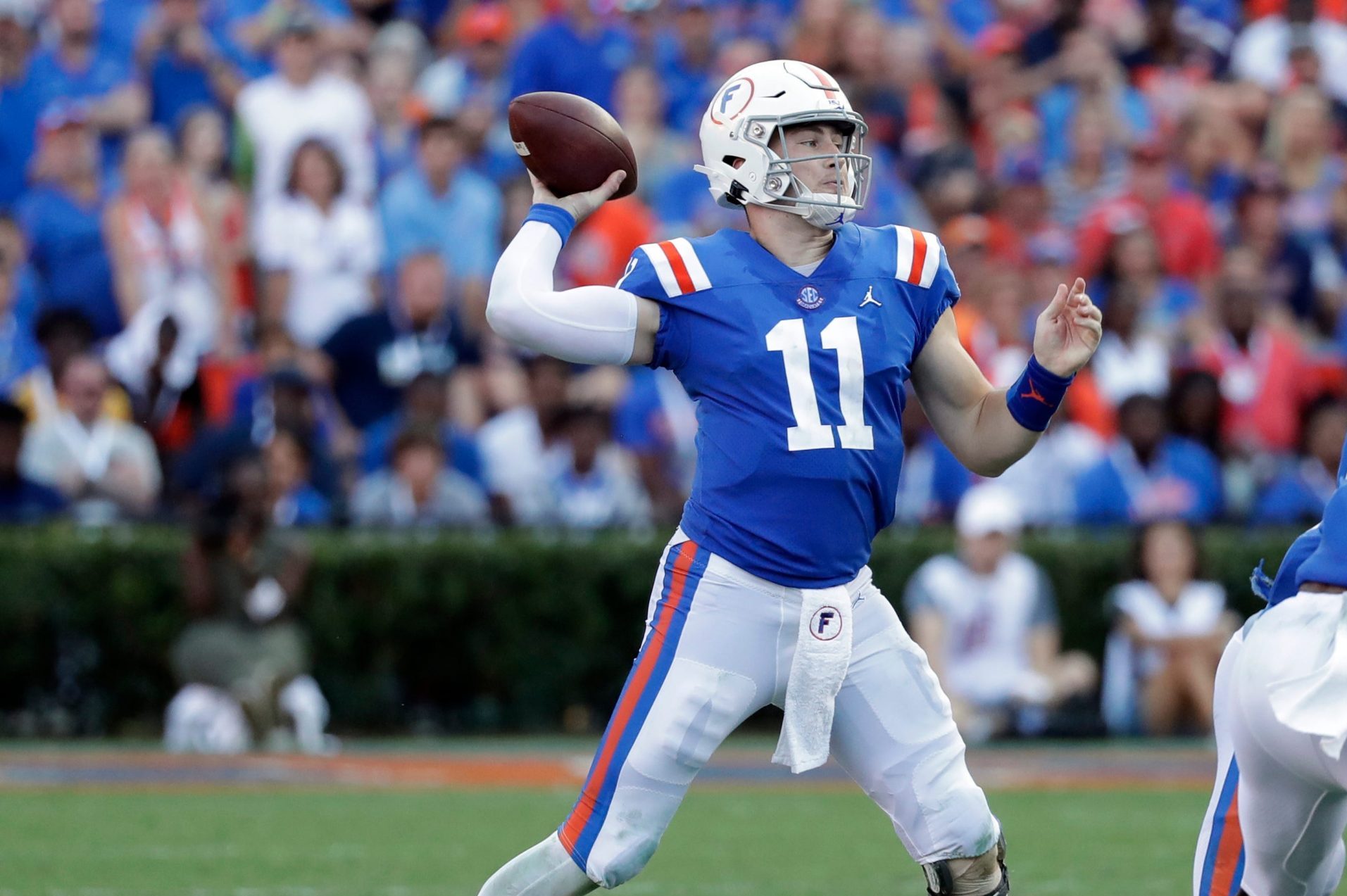 Hello again, devy devotees! We have another great week of college football in the books. This week saw still more upsets (hello, TCU and Iowa State) and a return to form from LSU. Clemson and Alabama continued their typical domination, with Mac Jones not missing a beat taking over QB duties from now-Miami-Dolphin Tua Tagovailoa. There’s a lot of directions we could have gone in for our week 5 Rising Star.

But there’s one breakout player that looks like he might be on a sky-is-the-limit type trajectory in his second season as a starter, and we can’t ignore him any longer.

Is Kyle Trask following in the footsteps of backup-to-Heisman hero Joe Burrow?

Kyle Trask was not highly recruited out of high school, earning three stars as the 92nd-ranked pro-style QB and the 2,123rd overall recruit.

He started off his career backing up Feilipe Franks; an ankle injury cost Trask the chance to fight for the job as a freshman. He wouldn’t see another shot until 2019, when Franks was injured during a game against Tennessee.

Trask threw for two TDs in relief, and went on to throw for 2941 yards and 25 TDs during the 2019 season, seizing the starting job definitively.

He’s ranking in the top ten in PFF grading, NFL passer rating, and completion %, and in the top 25 in passing yards and Y/A. His ten TD passes trail only Sam Ellinger.

He’s been great. He’s starting to have the “H” word thrown around quite a bit, and it doesn’t seem crazy when they say it.

We’re only two games into the season. We can talk more about awards if he goes off against A&M and LSU in his next two games. But Trask certainly shows a lot of the traits we like to see in a QB prospect and he wins games.

Let’s look at some film!

Anytime we’re looking at QBs on normal game film we need to remember we’re only getting half the information. Without all-22 it’s very tough to tell what the QB is/ isn’t seeing, what WRs are open, and so on.

Also, I cut this one up from condensed film, so we’re not seeing Trask’s worst plays here. Make sure to scout some full games!

Trask has shown outstanding accuracy and touch. Here’s a beautifully placed ball to rookie Xavier Henderson, dropped right into the soft spot in the zone:

Trask identifies and attacks the weak spot there, delivering the ball perfectly on time with 30 yards of air under it.

On a side note, it’s awesome to see Henderson involved as a true freshman. Go get him in your C2C.

I could just have easily made this a Kyle Pitts piece. He earned it with six TDs and 277 receiving yards in the past two games. But you likely already know that Pitts is a near-lock for the TE1 in the 2021 draft. He is a monster, and he’s going to be Kyle Trask’s best friend all year long.

These two have amazing chemistry already, and it’s only going to get better. Pitts gets off press like a WR, and it’s a perfect back-shoulder-throw by Trask. This will work every time- DBs are terrified of Pitts getting behind them.

The throw isn’t perfect- it’s a hair late instead of leading the receiver, and Pitts makes a nice adjustment- but Trask stands and delivers with two free runners about to hit him.

Nothing complicated here. It’s a nice slant route and a perfectly timed throw by Trask. That’s free money for Florida right there.

Trask feels the pressure coming, steps up, move to the side, and then launches this ball 30 yards across his body. It’s a little high, but Whittimore is 6’3″, and plucks it out of the air in traffic.

The awareness and movement he shows are some of the most crucial traits for an NFL QB, and they aren’t things that can really be taught.

Here’s another nice example of Trask feeling pressure and moving up in the pocket:

He throws well on the move, maintaining a good degree of accuracy while running. Accuracy on the move is one skill that makes QBs like Mahomes or Watson so deadly; I’m not saying Trask on their level, but his ability to escape the pocket, keep his eyes downfield, and make plays is a nice start.

Oh, and Kadarious Toney is #goodatfootball. This play is equal parts great RAC by Toney and terrible tackling by South Carolina, but Toney impressed all day, leading Florida with a 6/86/1 receiving line. He was also very good against Mississippi in Florida’s first game.

Trask has some sneaky rushing ability as well. He’s not as fast as guys like Dillon Gabriel or Bo Nix, but he shows good field vision, and he’s fast enough to do a little damage when it’s not expected.

Look, he’s never going to be the guy that’s running 15 times a game and racking up hundreds of yards. But he’s going to add a little yardage now and then on a scramble or a designed run, and that’s going to boost both his floor and ceiling in fantasy football.

Trask is likely owned in most C2C leagues, but he might not be in a 3-or-4 spot devy league. He’s definitely worth the pickup if you can squeeze him onto your roster without dropping a locked-in stud.

Imagine if you picked up Burrow at the beginning of his breakout season? It could be a nice profit.

Am I trading for him where he’s already owned? Maybe, if I can catch an owner that’s sleeping on him. His C2C ADP over the summer was 70 (C2C ADP provided by @dynastytools – thanks Shack!). I like him over many players in that range.

If I can get him in a straight-up trade for a player like Zach Evans or Demarckus Bowman, I’ll do that in a flash. I’d rather own Trask right now than several of the QBs drafted in front of him; if I can trade away CJ Stroud or Bo Nix for him, I’m doing it (and I love Bo Nix).

If you’re considering making a heavy move at him it might be worth waiting to see how he plays against A&M and LSU. On one hand, dominating against top-ranked teams is going to ratchet that price tag up quite a bit. On the other hand, I’ll feel much more secure in his breakout if I see him perform against the highest level of competition.

If you’re a believer, you might be able to get a more favorable deal this week while he’s only beaten up on two middle-tier teams, but, be careful. Go scout a few more games. Don’t take a big swing based on a handful of highlight clips and my recommendation alone.

At this point, I can say for certain that he has some key traits for success, but I won’t be convinced he’s the total package until I see it.

That’s it for this one, but I’ll be back with more Devy Dose this week on twitter. See you then!