Who were the Devy Dose Rising Stars from college football’s first full slate? Hint: There’s some dogs in here. 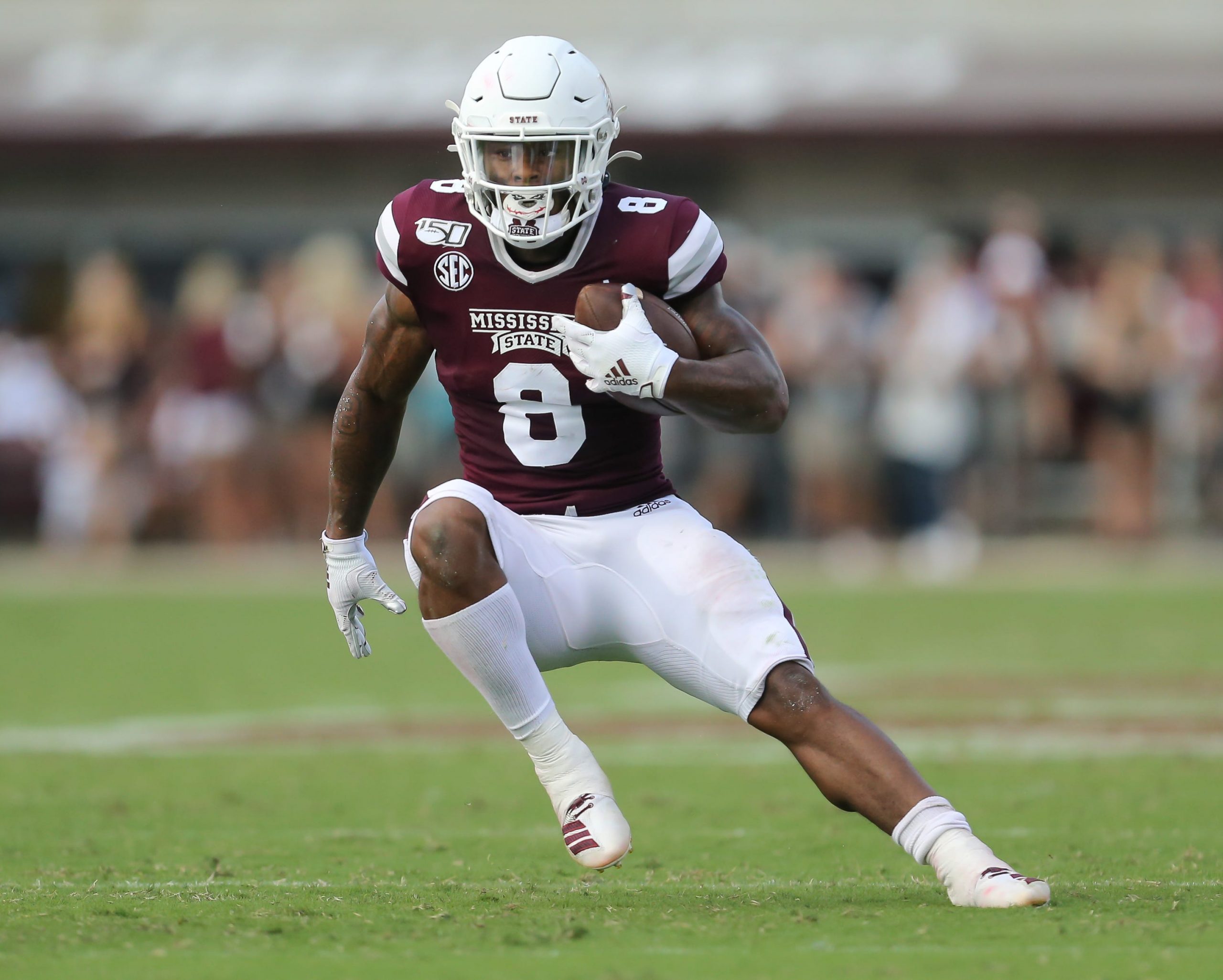 We had a full slate of college football this weekend!  And exciting games they were, with a couple of big upsets and a host of impressive performances.

It was tough to settle on a rising star this week.  There were so many deserving candidates.

Kyle Pitts put up a dominant 8/170/4 line, reasserting his #1 TE draft status for the 2021 class. His QB Kyle Trask posted an impressive 30/416/6 line, beginning what many see as a breakout season.

But I would be remiss to ignore the fury Mike Leach and KJ Costello brought to Louisiana State this Saturday, handing the Tigers an upset in their own building and posting some ridiculous stats on the way.

KJ Costello transferred to Mississippi State for the 2020 season. He started three years at Standford, where he posted good-not-great numbers in David Shaw’s system. He only played five games his senior year due to a hand injury.

When Mike Leach was hired as HC for Mississippi State this winter, he plucked Costello from the transfer portal, remembering the young signal-caller’s quality play in his duels against Washington State.

Coming into this game, Leach and his air-raid offense had been responsible for six of the twelve NCAA games where a passer exceeded 600 yards.

Saturday made that number seven. Costello threw for a blistering 36/623/5 passing line in his first start as a Bulldog.

It’s notable that this wasn’t against a watery PAC-12 or Big-12 defense, but against the defending national champion LSU Tigers, a unit that humbled talented offenses on its way to the trophy.  LSU was the 14th-ranked defense in all of 2019 college football.  They lost a lot of talented players- Queen, Chiasson, and so on- but still have as talented a core as any in the league.

It was a lot of this on Saturday:

That ball was to another transfer, ex-Alabama WR Tyrell Shavers.

Costello has one hell of a deep ball.

In fact, he has uncanny touch and accuracy on passes to every area of the field. He’s got his issues as a prospect, but arm talent is not among them.

This tuddy was a dime to Osirus Mitchell. Mitchell was his favorite target on the week, yielding an impressive 7/183/2 line.

Costello drops it in the bucket, throw after throw. His timing and ball placement often look elite.

The above is another bomb to Mitchell, who is definitely going to be on a lot of devy and C2C waiver lists this week.

Mitchell has some awesome traits. We’ll come back to him, but look at the focus here, and his “lateness” turning for the ball. He’s a good receiver, I expect he’ll get a look in the NFL.

But, back to Costello: these are big-boy, Aaron Rodgers, Russel Wilson type throws. And I’m not cherry-picking; he threw a ton of beautiful balls.

This across-the-field dime is nearly perfect. It’s yet another TD, this time to Austin Williams.

Yes, the air-raid system works. It helps QBs by giving easy reads and scheming receivers open. Still, Costello is capitalizing on opportunities. He progresses nicely through his reads, spreads the ball around, and deals with precision.

He also does a nice job of stepping up in the pocket, and he makes a lot of good throws on the move and under pressure.

Here’s a laser he throws to Mitchell as he’s sliding up and about to get creamed:

I’m not going to be able to get too deep into Mitchell here, but the senior WR stood out, even with awesome performances from several of his teammates. He’s a savvy pass-catcher with nice RAC ability and a ton of dog in him, and he’s got an alpha frame at 6’5″, 205.

Here’s my other favorite Mitchell clip:

For a bigger dude, Mitchell’s got jets. These aren’t small-school kids he’s running away from, they are LSU DBs. Some of these guys will play in the NFL.

Costello was often good under pressure, and he was unstoppable on third downs, not just throwing at the sticks but pushing the ball downfield fearlessly.

This bullet to JaVonta Payton– another SR, coming the JUCO route, who has also dispayed some high-end traits- came on a 3rd-and-10.

Here’s the other Payton catch that stuck out to me. It’s also another nice example of Costello stepping up under pressure. Payton looks quick in his route and gets up to get this one, showing off some athleticism.

It wasn’t all roses for Costello. There’s a blooper reel as well, which is, to some degree, getting swept under the rug in a lot of the press.

He made more than a few poor decisions with the ball. There were Jameis-Winston-esque giveaways on 50/50 balls and missed reads, some in key situations.

This jump ball pick in the 4th let LSU back into the game:

That’s bad. You can’t do that.

Costello has to clean these mistakes up if he wants to play in the NFL.

Someone will take shot on the arm talent either way, but he’s going to be kept out of the “day one” conversation unless he shows he can be more careful with the ball or a team thinks they can coach him up, as with Green Bay and Jordan Love.

Lost in the shine of Costello’s record-breaking day was a performance of pure octane from Mississippi State runner Kylin Hill.

I’m not sure about all that, but there are certainly some good arguments, such as this Alvin-Kamara imitation in the 2nd quarter:

A 210 lb (at least) workhorse back that runs crispy routes and breaks ankles? Yes please.

Many of his 15 touches were highlight-worthy:

He’s fast enough to catch the edge and burst by defenders. He’s effective running outside as well as between the tackles.

But when you combine that with elite receiving chops and elusiveness- the subtle manipulation of the safety here in the next clip makes his catch a TD- you have a first-class ticket to day 2 of the NFL draft (and fantasy stardom).

Hill’s combination of movement skills, speed, and receiving ability make him a darling of devy players and draftniks both.

Watch him take this shovel pass for an easy 25 yards:

He’s got the vision to read the field, knows to use his blocks, and can manipulate defenders. He’s doing all of this at a high level for a college back.

I can’t wait to see how the rest of the season unfolds for Hill and this whole offense. It’s going to be fun to watch.

If you picked up Costello this summer at his 74.4 overall C2C ADP, congratulations. You’ve made yourself a profit.

Now, to buy or sell? I’m going to be watching the next few games closely. As I said earlier, the arm talent is top-end, but there’s some work to get done still between the ears.

Many lauded QB prospects fall flat on their face. I think if you have the opportunity to sell high- for a proven NFL asset- then it might be wise to do so.

If you’re looking to buy? Don’t overpay for the stats. Minshew played like this and went in the 6th round of the draft. College production is nice, but it doesn’t always translate into draft stock.

If you’re in an active C2C or college fantasy league, well, congratulations on your league-winner.

It’s unlikely Mitchell is owned unless you’re in a deep C2C. Even then, it’s quite possible he’s on waivers, though I’ve found some of my sharper league-mates were already on him.

I don’t have enough information to make a confident analysis of Mitchell until I get into some all-22 and watch his route-running and blocking.

What I’ve seen so far I like a lot. He’s got traits that will translate, and you can be sure he’ll have some excellent production this year to round out his draft profile.

I’m trying to pick him up wherever possible. I couldn’t guess what his trade value is; maybe you try to offer a slightly more name-brand wide receiver that you like less as an NFL prospect.

With a 23.4 overall C2C ADP, Hill was already a hot devy asset, and I’m certain that that price just went up this week. He’s had devotees all summer, and anyone that has been following Hill has to be elated about his prospects in this soaring offense.

I’ll say this: I think Hill has as good a shot as making it in the NFL as any of the backs being drafted ahead of him, and I think that three months from now, this won’t be a controversial opinion.

I’m not saying he’s better than Etienne or Harris, just that he also has some excellent traits and film. I think they should be ranked more similarly than they have been coming into this season.

If I could trade away one of those first-round C2C guys for Hill + another nice piece, that’s a deal I would make.

Alright fantasy peeps, that’s it for this one. I’ll see you later this week with some more Devy Dose- I have Auburn clips coming your way!

Next Man Up: Regular Season Week 4
Truth or Trap: Which is Josh Kelley?