@ekballer takes a deep dive into two of the hottest names in CFB, Zach Charbonnet and Kenneth Walker III, and what they mean to your devy squad! 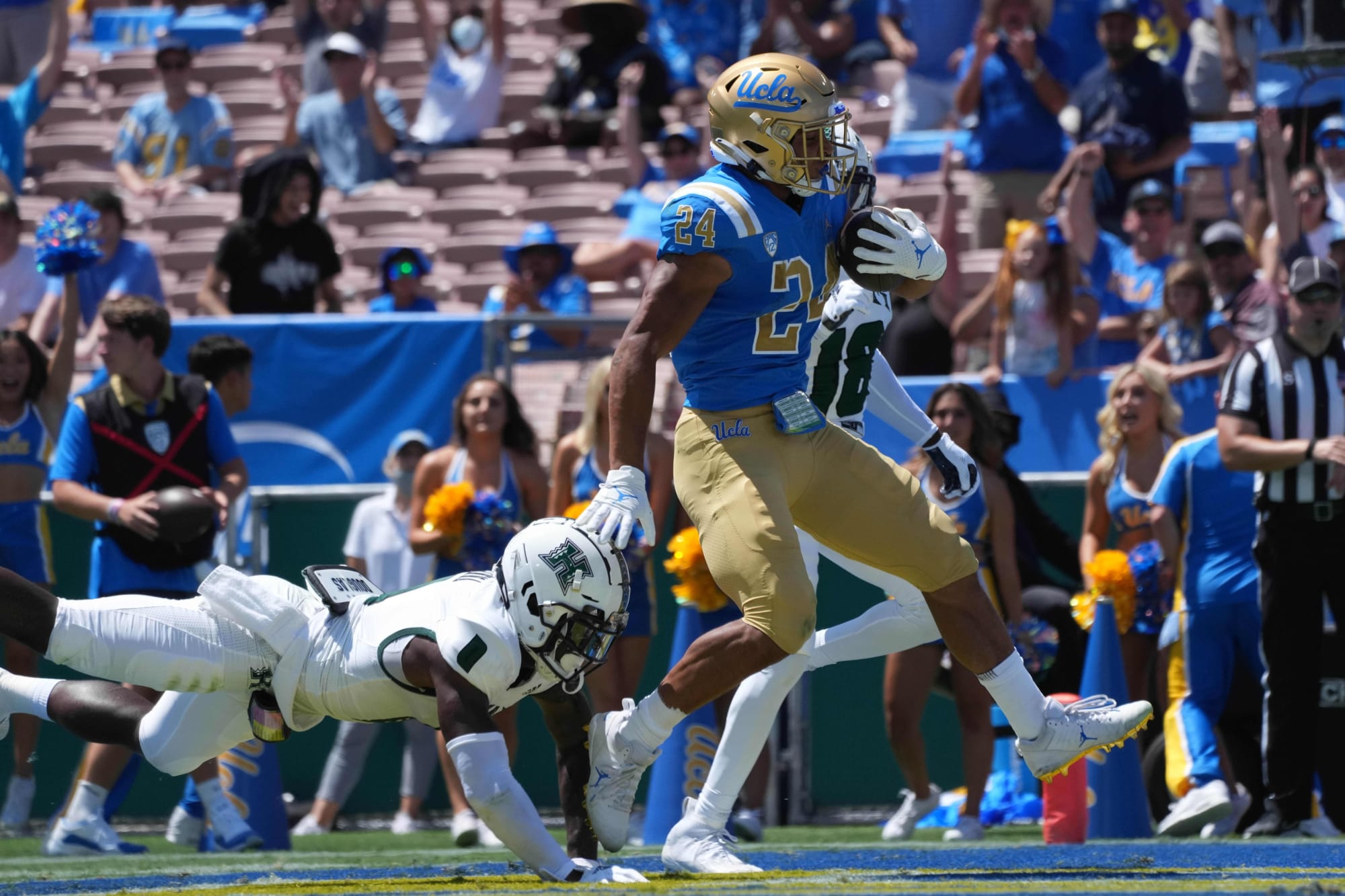 One of the stories of the 2021 season so far has been the utter domination of running back transfers Kenneth Walker III and Zach Charbonnet.

Both have long been film-grinder favorites, flashing talent on limited opportunities in 2020 and 2019. Both enjoyed epic coming-out parties in CFB’s week 1 and have solidified their stock with subsequent success.

Let’s take a deep dive into these two and see what we should be doing with them in devy / c2c!

The RB4 in the 2019 recruiting class, Charbonnet landed in Michigan by way of Oaks Christian High in CA. As a high school prospect, he was already 6’1″, 215, and drew comparisons to David Johnson. He received high four-star ratings and was projected to be an early-round NFL draft pick.

In his FR year at Michigan Charbonnet played in a near-even timeshare with Hassan Haskins but outperformed him in most stats, ending the season with a 149/726/11 rushing line and 8 receptions for 30 yards.

For Charbonnet’s 2nd season Michigan was a 2-4 mess with a true committee at RB. Haskins led with 61 attempts, FR Blake Corum had 26, Charbonnet only 16, and Chris Evans received 16. Despite the inferior workload, Charbonnet was 2nd on the team in rushing yards.

In January, Charbonnet announced his transfer to UCLA, seeing his opportunity to seize a lead role.

Walker was recruited by Wake Forest and made an immediate impact, finishing 2nd amongst the Deacon’s backs in scrimmage yards and TDs as a freshman, and leading in YPC with 5.9. He was productive as a SO with 609 scrimmage yards and 13 TDs despite being passed on the depth chart by Christian Beal and eventually opting out in early December.

By January 6th, a day after entering the transfer portal, Walker announced he had committed to Michigan State for the 2021 season.

Breakout Seasons by the Numbers

Through four games in 2021, both backs have established themselves amongst college football’s top-tier players.

Charbonnet has run the ball 23 times for 242 yards and 6 TDs, adding another 49 yards through the air.

Walker has owned his team’s work with a 52% rush share and a 32.5 % dominator rating, qualifying as a true breakout season for the runner.

While Charbonnet’s rush share has been a more modest 28.2%, his 10.5 YPC and 31% dominator are undeniably impressive numbers. He’s accounted for more than a third of UCLA’s scores.

Both players have had three great games and one less-than-great outing, but each has laid down enough stellar tape already to claim significant draft capital this spring.

The Film & the Traits

Charbonnet has been putting on a master class in tough running. His first outing as a Bruin produced some noteworthy highlights, including this TD run:

First, let’s just acknowledge that this was against Hawaii. The Rainbow Warriors are barely an FBS-level defense.

Second, let’s acknowledge that he breaks no fewer than five tackles on this run, including crushing both of the safeties back-to-back. He created this touchdown run on will and brute force from what should have been a four-yard rush. It’s pure domination, and it’s fun as hell to watch. He also shows some nice lateral movement skills to hit the initial crease, and some blazing speed (at 220 lbs) to finish the run.

This next clip is the other end of the spectrum for Charbonnet; why go through guys when you can run past them?

Here Charbonnet hits a nice cutback on a zone run. He shows some vision at the first level to spot the hole, then gashes the middle of the defense with his speed. It’s a 21-yard run and no one touches him.

This next TD run is a lot of the same: good vision behind the line, a jump cut to get the hole, and a whole lot of speed to find the paint.

He also does a nice job of setting up the safety as he hits the five, feinting to the outside just enough to make the guy lose any shot at an angle.

Charbonnet is a creative, powerful runner with the size and speed that make NFL GMs go gaga. He’s also shown off soft hands this year, like on this rep:

He always adds yards, he always extends the play. Charbonnet reminds me of Cam Akers in all the right ways.

Kenneth Walker III is an entirely different animal, but he’s left me just as impressed. He announced his arrival on the scene this year with his very first carry as a Spartan:

Walker has the vision to see the play unfolding upfield, burst to hit the edge, agility to make the safety miss one-on-one, and the long speed to take it home.

His short-area acceleration is definitely one of his calling cards, as you see here:

He’s absolutely shot out of a cannon on that run. And he finishes his runs hard; he destroys the first tackler here. If it was that guy between him and a tuddie, he was getting in.

Walker also has the ability to change direction on a dime:

He sees his first read has collapsed, sees the space on the edge, and hits the throttle for 15. This instant start-stop, push-the-button-and go-ability complements his vision and long speed perfectly and is one of the biggest factors in Walker piling up chunk gains over the past four weeks.

This last clip sums up all my favorite things about Walker’s running:

He’s patient in letting the blocks develop but sudden enough in his acceleration to avoid what should have been a TFL. He runs through that arm tackle; as soon as the safety bites he bounces outside, creating another 20 yards. This would have been a stuff or a short gain for a replacement-level FBS runner.

What Are We Doing With These Guys?

If you can get either Walker or Charbonnet on your devy roster, do it.

These guys are getting drafted; if they continue piling up tape and stuffing stat sheets, it’s reasonable to project either as a day-two guy. Trey Sermon just went at the end of the third round, and he’s about 60% of Charbonnet as a runner.

For C2C leagues, it’s going to be tough to pry them away from owners. Any contending team is soaking up the points, and it’s obvious to casual CFB fans and box-score scouts that these dudes can ball.

Still, both Charbonnet and Walker are going to be acquired more cheaply than Isaiah Spiller or Breece Hall, at least in devy. If my NFL team is weak, I’d be psyched to ship a replacement-level NFL back (Darrel Henderson?) for Charbonnet, or a guy like Josh Jacobos for Charbonnet and a freshman pick.

He’s my primary target of the two as I think he’ll get drafted earlier- his pedigree and size/speed combo (I think he blows up the combine) along with few more impressive performances could bounce him into the 2nd round.

From a pure CFB point of view, Walker is my Huckleberry. The Spartans line is beating teams up and feeding him all the volume you could ask for, and I think his acquisition cost may be a little lower. I do see him as more of a late 3rd round player, unless he strings together some even-more-impressive games here through the middle and end of the CFB season.

If I could ship out an older, middling NFL WR- say, Corey Davis, or Robert Woods- and get Walker and a freshman pick, I’d do that. I’d even be interested in the type of deal where I send an NFL back and get Walker and some other pieces in return, but only if he’s going to help me win the CFB pot this year.

If you’re reading this and you’re playing dynasty but not devy, these dudes should make you excited for your mid-to-late firsts. They’ll likely go after the top WRs, so you’re going to get these guys without having a top pick.

What do you all think? Are these guys going to hear their names called on day 2 of the draft? Have you traded for either player? Let me know in the comments or hit me up on twitter at @ekballer!

It’s the Perfect Time to “Buy Low” on Ezekiel Elliott
That’s going to leave a mark: Week 3 Rehab and Recovery