In an action packed week of college football, there can only be one Rising Star. This week: Kyren Williams, RB, Notre Dame. 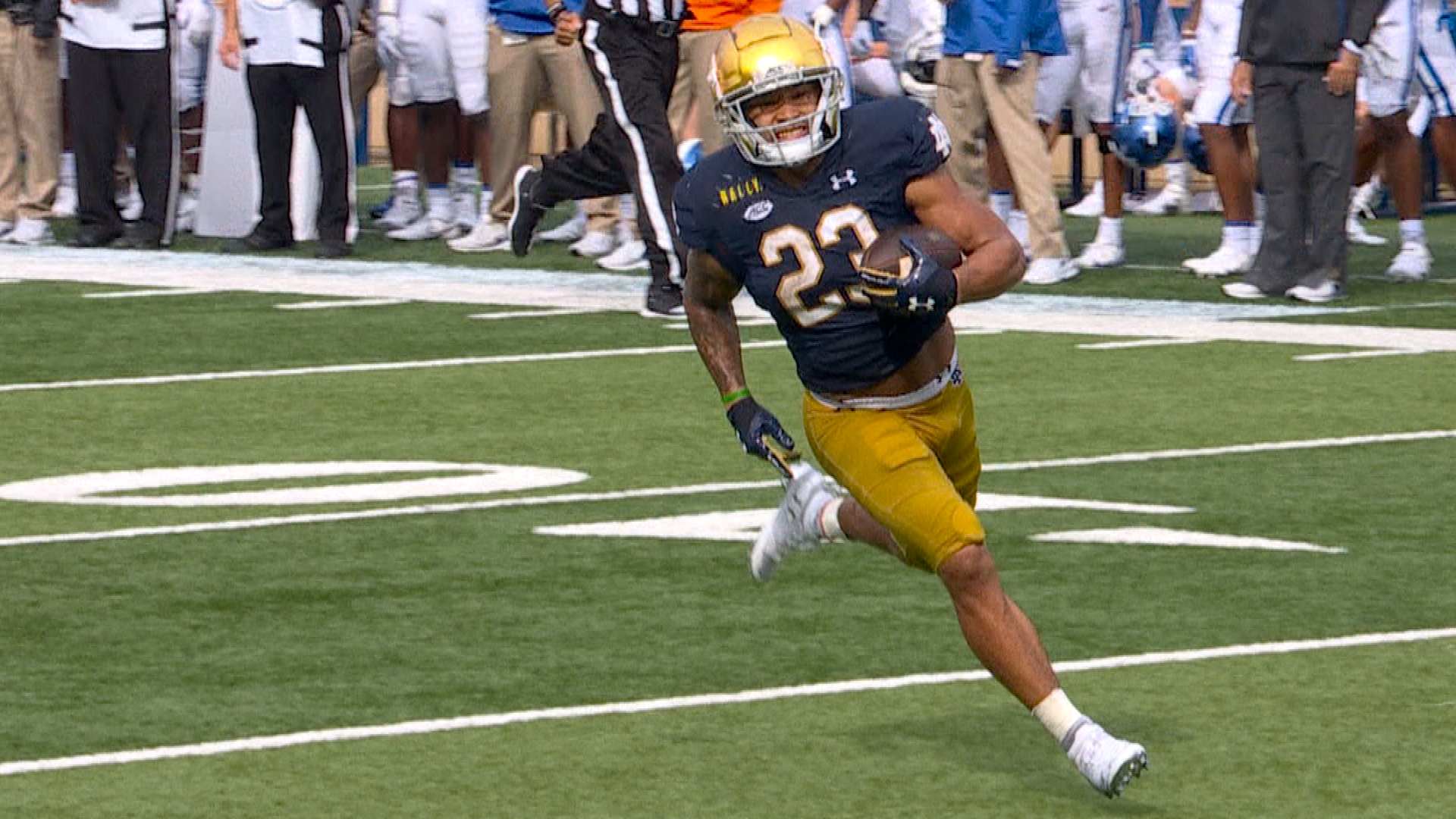 Another incredible week of football is in the books. This time out we saw a quadruple OT in which Spencer Rattler fought back from a 2nd-quarter benching to top Texas, despite Ellinger’s own OT heroics.

We saw some upsets, as A&M wrangled the Gators and Missouri outlasted LSU; we saw Ole Miss hang with Alabama in a shootout that hit a whopping 111 total points.

There were many Rising-Star-worth performances, as always.

It’s too-low-hanging fruit, but Najee Harris laid down a dominant 5 TD argument that he should be the ’21 RB1.

Isaiah Spiller ran with his team on his back to the tune of 174/2, and Michael Carter led all RBs with 214 yards.

Matt Corral showed he can hang with the big boys, throwing for 365/2 with a 75% completion rate against ‘Bama, and Mac Jones and Myles Brennan each broke 400 yards passing.

Terrance Mashall continued raining terror down on the SEC, adding another 3 TDs and 235 yards to his breakout season.

But this time out I wanted to highlight a player that’s a little more under-the-radar: Notre Dame sophomore running back Kyren Williams.

Kyren Williams is a 4-star rated, 5’9″, 200-lb back out of St. John Vianney, Missouri. Last year as a freshman he only saw five total touches; he was 12th on the team in rushing attempts behind players like Tony Jones Jr. and Jafar Armstrong.

Williams announced his arrival on the CFB scene in Norte Dame’s first game of the season, running for 112 yards and 2 TDs against Duke.

In Duke’s second game, Williams had a decent outing, with 62 yards on 10 carries, but was outshone by teammate C’Bo Flemister.

There were questions to Williams’ place in the RB pecking order coming into this Saturday’s game against FSU, but the young runner quickly put them to bed. In the first ten minutes of game time, Williams ripped off a 65-yard scamper (to set up a Michael Myer TD) and then, on his next series, a 46-yard TD run.

He continued to pile on yardage throughout the contest, finishing with 196 combined yards and 2 TDs, and earned himself the week 6 Rising Star.

We have to start our film session with the glory play:

I have to say that Notre Dame’s blocking was excellent on this play, and they deserve most of the credit. But Williams shows great burst and he picks nice angles to beat the free rusher and then to get downfield with economy. He has long speed as well; no one was catching him from behind, even if they had another 20 yards.

Here was his other big run, this one highlighting some of his best traits:

Check out the contact balance and recovery; not only does he beat the first tackler, but he’s able to recover quickly enough to sidestep the LB as well. You see it again at the end of the play when he’s tripped up; he barely loses a step recovering and extends the play still more.

Oh, and I did I mention speed? Kyren Williams is fast.

Here’s a little six-yarder to the outside where he makes a few more guys miss:

He shows great anticipation, reading the blocks as they develop, and makes quick, slashing cuts to maximize his angles. Williams shows some nice vision for a young runner. He sees the field well and evades proactively.

Here’s another one of my favorite Kyren runs:

The dead leg he burns the first LB with is filthy, and he explodes out of the deke to nearly beat the other LB as well. That guy saves a TD with the ankle tackle on Kyren.

Here’s another one much the same:

Then there are straight up power runs as well:

I love this kid. That’s pure dog right there: driving the legs, blasting through the first tackler, fighting through two more tackles.

I wish I got to this column a few weeks ago; Kyren Williams was on waivers in every C2C before that first blow up game.

If your league does a mid-season “devy auction” he might still be out there. Go get him.

If you’re in a regular devy league, he’s out there on the wire, and he’s definitely worth a pickup if you have any dead weight.

Is he worth targeting in a trade? Yes. He’s going to be a productive CFB back and I believe he gets a shot at the next level.

If Kyren keeps playing the way he has been, by the end of the season we’ll be talking about him in the same breath as guys like Ealy, Gray, and Spiller. We need to see more from him than beating the bag off two bad defenses, but I’ll surprised if he’s not drafted, unless something goes very wrong for him in the next 18 months.

But what are you paying for a guy like this? I see him more as a player you ask for as a throw-in in a bigger trade. I doubt that most owners are emotionally invested in him at this point; most people probably saw the big box score and scooped him up on waivers, so you can probably get him cheaply.

He’s no lock to make The League at this point but I love his traits and his opportunity. He gets to play on national TV every week with a good o-line on an offense with a few playmakers. He’s going to have opportunities to shine and build his draft stock.

I’m particularly interested in watching his week 8 game against Pitt. Pitt’s defense is playing lights-out. If Kyren can produce in that spot, I’m all in.

That’s it for this week guys! Look for a couple threads to come later in the week. Thanks for the read, and I’m always on Twitter at @ekballer if you want to talk shop.