This week the Devy Dose takes a look at a guy that has been running amok across the ACC. Meet: Khalil Herbert 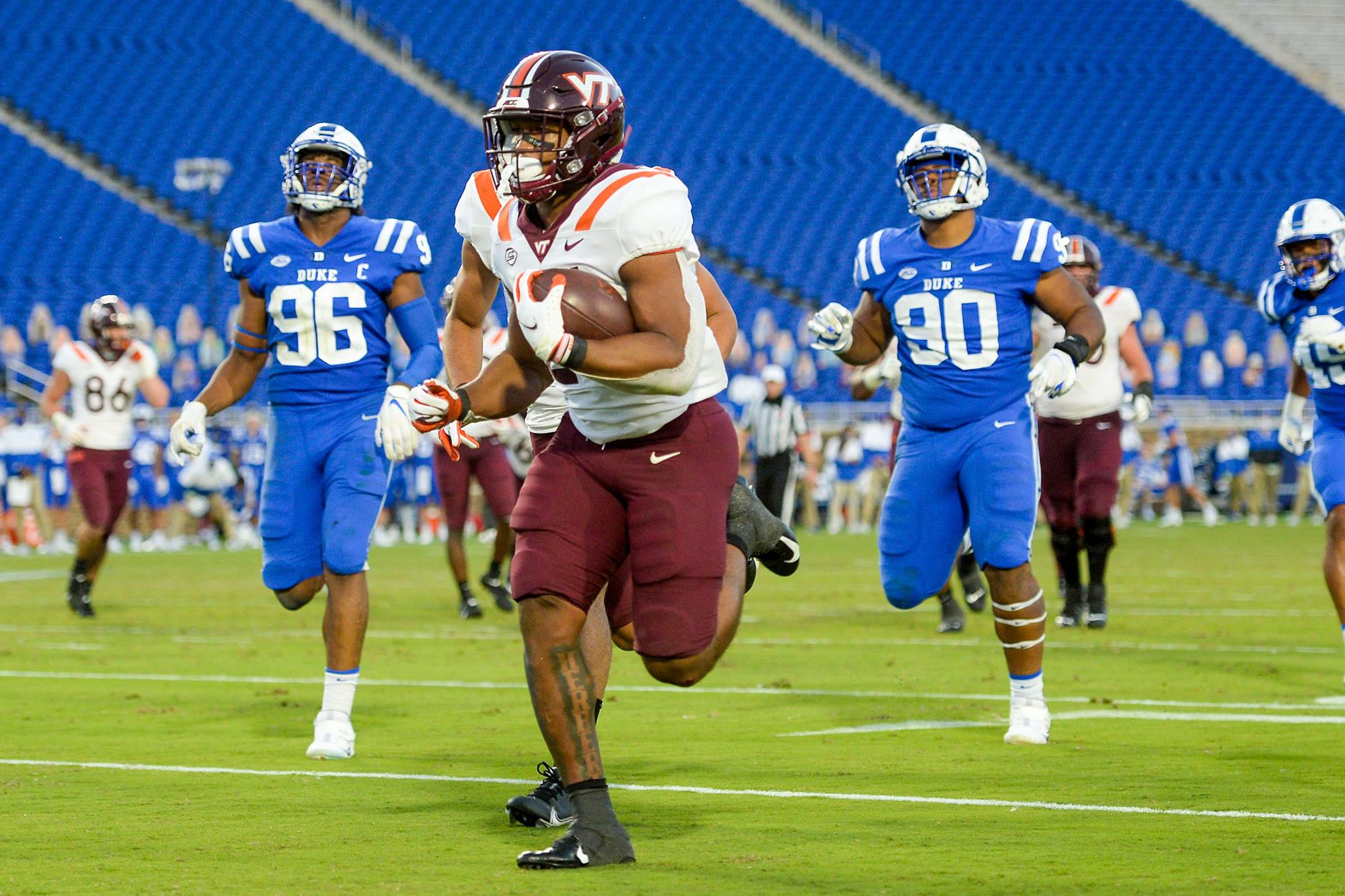 Every week here I want to bring you all the awesome CFB breakouts, but I have to winnow it down to just one or two guys, and it’s never an easy decision.

It’s tough for me to continue ignoring Zach Wilson here, and it’s tough to turn a blind eye to what Taulia Tagovailoa did with Maryland this weekend. He looks good!

But Khalil Herbert requires your attention.

He’s fourth overall in NCAA rushing yards with 803. Herbert has run for 8.4 Y/A- the best of any player with more than 35 carries, and that by over a half-yard.

In four of five games played he’s gained at least 138 yards, including an 18/138/2 romp against a decent North Carolina defense.

Khalil Herbert was not highly recruited out of high school, ranking as the #143 RB in the class of 2016. He played four years at Kansas before transferring as a grad student to Virginia Tech this fall.

In his SO season, he led Kansas in rushing with 663 yards. In 2018 and 2019 he was still productive but lost the starting role to Pooka Williams, who put up back-to-back 1000 yard seasons.

Usually, I focus on current-week plays with this column. Herbert’s beatdown of Louisville didn’t really showcase his skills, so I’m pulling film from a few games here.

He is one run from the the Louisville game I liked quite a bit:

Herbert is excellent at changing direction without shedding momentum, and he uses this skill to great success, weaving through the hole and beating defenders one-on-one. He’s got killer vision and anticipation.

Here’s another rep, this time slowed down a bit so you can see some of the nuances in his run:

Herbert has the skill to manipulate defenders and use his impressive change-of-direction ability to make them miss.

In this clip below against BC, watch how well he sees and uses his blocks:

That’s not a skill that a lot of running backs have. He sees plays develop extremely well- not just where the hole is, but where it will be. He sets the defenders up with his initial line then cuts back across his blockers to get free for huge gains.

And huge gains are what this man does:

I love the fluidity of his movements through the hole; he’s slippery and quick. He cuts with suddenness to beat the defenders downfield and fights through tackles. Herbert creates all of this yardage for his team and nearly sneaks in for a TD.

He might not have crazy speed, but he has enough, and he has excellent acceleration. With his ability to anticipate and choose winning angles at all levels of the run, Herbert doesn’t need to win with speed or even agility.

Herbert can be both patient and decisive when called for. He waits for the hole to develop here, but he’s always looking to get downhill.

He doesn’t force the play, he lets it come to him. But when he sees the hole he plants and cuts razor-sharp to get upfield.

Herbert impresses me more and more the more film I watch.

If you’re in the type of C2C that only has one or two claim periods a year, it’s entirely possible Herbert is still out there. Go get him! I snagged him in a waiver run last week.

Is he worth targeting in a trade? Well, maybe.

It’s tough to know if a guy like Herbert is going to make it in The League. He has high-level vision and COD ability, so I do think if he gets a shot, he has the tools to succeed.

I’ll be very interesting in his testing numbers at the combine. I found a 4.69 40 time recorded for him (I think on ESPN) and that would be below the threshold at which most backs succeed. That could have been a high-school time, and he’s likely to test better. Still, analytically, he’s not likely to have a great profile unless he somehow gets high draft capital.

Herbert falls into that category of guys that I’m interested in owning, but only at the right price. I like targeting these guys as throw-ins into a larger deal- say, selling a useful NFL piece for a treasure chest of devy guys and including Herbert in that haul. The hit rate on this type of player isn’t great, but he’s definitely worth a shot.

If he does get draft capital, I’ll be stoked for him. He’s got skills, I just worry about him getting on the field.

If you’re in a normal dynasty league, Herbert’s going to be one of those late-round RBs that have a shot to hit (Gaskin, Robinson), well worth a flier in the 4th.

That’s it for this time- see you all this weekend with more threads!