@Glosser13 takes a look at an RB who is flying under the radar with the potential to carve out a role in the NFL and on your fantasy squad. 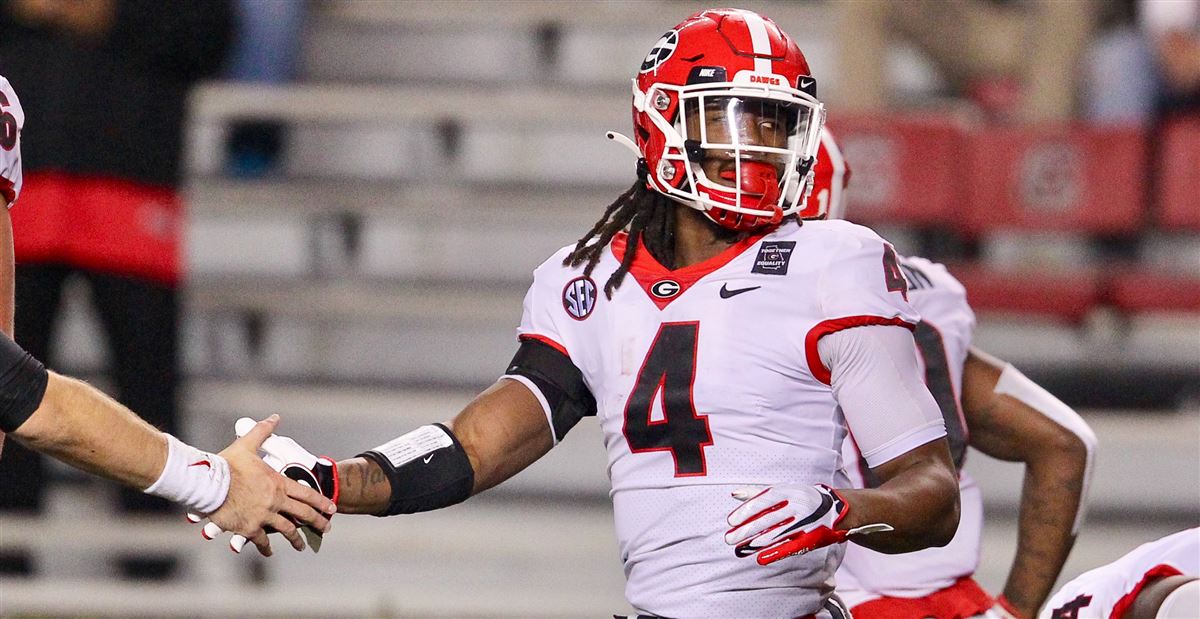 The college football season is underway. Let’s look at one of the forgotten impact players who has dropped off the radar. Off to a hot start, Georgia running back James Cook is a player that fits this mold. Cook wasn’t taken in 10 round PPR Superflex Devy mock drafts this off-season. While we often look for the newest freshman for our rosters, the veteran players can easily be forgotten. The impact draft capital and landing spot can play into a prospect’s NFL future are so huge. We would be doing ourselves a disservice by not recognizing a player who has contributed to one of the best programs in the country for four years.

Georgia Bulldogs tailback James Cook was ranked the 3rd best All-Purpose back and the #8 overall player from Florida in the 2018 class. That class included 2021 NFL Draft first-round pick Patrick Surtain II, the #2 ranked player from Florida that year. It’s no secret James Cook is the brother of former Florida State RB, now Minnesota Viking Dalvin Cook, one of the best-skill position players in the NFL.

While Dalvin Cook has earned the adoration of fans and dynasty managers, it’s worth noting his brother is no slouch. James Cook was a two-way player as a senior in 2017, being named to the 2017 All-Dade Class 8A-6A First Team. He scored 10 offensive touchdowns and 2 defensive touchdowns. The Miami, Florida native finished his high school career with an FHSAA Class 6A State title while also competing as a member of the Miami Central track team in the 100m,200m, and 400m events.

Named Georgia Offensive Newcomer of the Year in 2018 as a freshman, Cook finished fourth on the team in rushing yards (284). The Georgia RB did most of his damage in a reserve role in blowout wins. Cook had his best game against UMass, accounting for 99 yards on offense. He rushed for 76 yards and collected 23 yards receiving. This game accounted for 26.76% of his rushing yards and 25.84% of his receiving yards during his first season in Athens.

During his sophomore campaign, he was one of five Georgia running backs with at least 25 attempts on the season, including the 2020 second-round NFL Draft pick of the Detroit Lions De’Andre Swift, who led the team with 1,218 rushing yards. Cook improved significantly as a receiving back doubling his receptions total from his freshman season; he also improved his receiving yards while maintaining over six yards per carry on the ground. The Georgia RB started three games in his second season while again being named the most improved player on the offense.

James Cook was named to the pre-season Doak Walker Award list as a junior. The Doak Walker Award is awarded annually to the nation’s best RB at the end of the season. Dynasty managers cooled on him after his 2020 season when he was expected to step up big with De’Andre Swift leaving for the NFL, and that just wasn’t the case. The former highly ranked all-purpose back finished second on the team in rushing while only appearing in eight games.

James Cook also finished 4th on the Bulldogs roster with 16 receptions for 225 yards and two touchdowns, all career highs as a receiver. The signature play of his junior season was an 82-yard touchdown reception against Alabama when he lined up out wide against LB Christian Harris and burned him for an easy score. Unfortunately, Cook dealt with injuries and the loss of his father that cost him many games in 2020 and perhaps a chance to enter his name in the 2021 NFL Draft.

Just three games into his senior season James Cook is on pace to set career highs in both rushing attempts and receptions. In the first three games, he averaged 4.6 carries per game and 2.6 receptions per game. Both would keep him on a career-high pace over 13 games. He has scored three total touchdowns in his past two games, including rushing and receiving touchdowns in his last game against South Carolina.

The question for NFL teams is how exactly do you highly invest in a college RB with such limited carries? Maybe the answer is you don’t. Sometimes we pay a bit too much to draft capital and not enough for situations and opportunities. There’s plenty of RBs who have been taken in the fourth round or later who have been reliable fantasy football producers; Aaron Jones (5th round), James White (4th round), Phillip Lindsay, and Danny Woodhead (undrafted).

There’s plenty of room on an NFL roster for a player with the skill set of James Cook, and with another productive season at Georgia, he can find himself being a 3rd to 5th round draft pick. The reality is that not everyone will be a high producer in college football and do the same at the NFL level. University of Memphis RBs Tony Pollard and Antonio Gibson are both cases of limited college production profiles who’ve become solid NFL players. In addition, it doesn’t seem that any of the potential RB prospects for the 2022 NFL Draft are looking like ‘can’t miss’ players. It wouldn’t be that surprising to see James Cook’s value increase as we move closer to the next off-season.

The Georgia Bulldogs have produced five RBs who’ve been drafted to the NFL since 2015, including Todd Gurley, who won an NFL Offensive Player of the Year in 2017. James Cook would likely be a more attractive prospect if he decided to transfer to a team that would give him 250+ touches, but to his credit, he honored his commitment to the team he committed to four years ago. Cook will be given the benefit of the doubt and draw some extra interest just because of how good his brother is.

James Cook could be a solid NFL player and would fit well in a role like James White, or Nyheim Hines plays for their respective teams. Every RB entering the NFL from elite-level college programs can’t be great, but there’s a reason why they earn touches over a three to four-year period. These talented players face the risk of a better player coming in at their position almost every year. If they can land in a situation with decent draft capital and an opportunity for playing time as a rookie, that’s a perfect scenario for dynasty managers.

Check out all the Devy content at dynastynerds.com, including the film room we constantly update with 2022 prospects tape. I appreciate you taking the time to read this article. I hope it opens up your way of thinking when it comes to getting ahead of the competition in your league by attempting to get players the community isn’t very high on.

There’s plenty of examples both past and present where a forgotten or undervalued prospect has turned themselves into a valuable dynasty asset very quickly. Do yourself a favor and put in the work to get ahead of that value spike and acquire these players before, so you aren’t the one paying that high price but rather the one selling at that high price.