Bijan Robinson is a special player. Check out what the #1 RB recruit is bringing to Texas this fall. 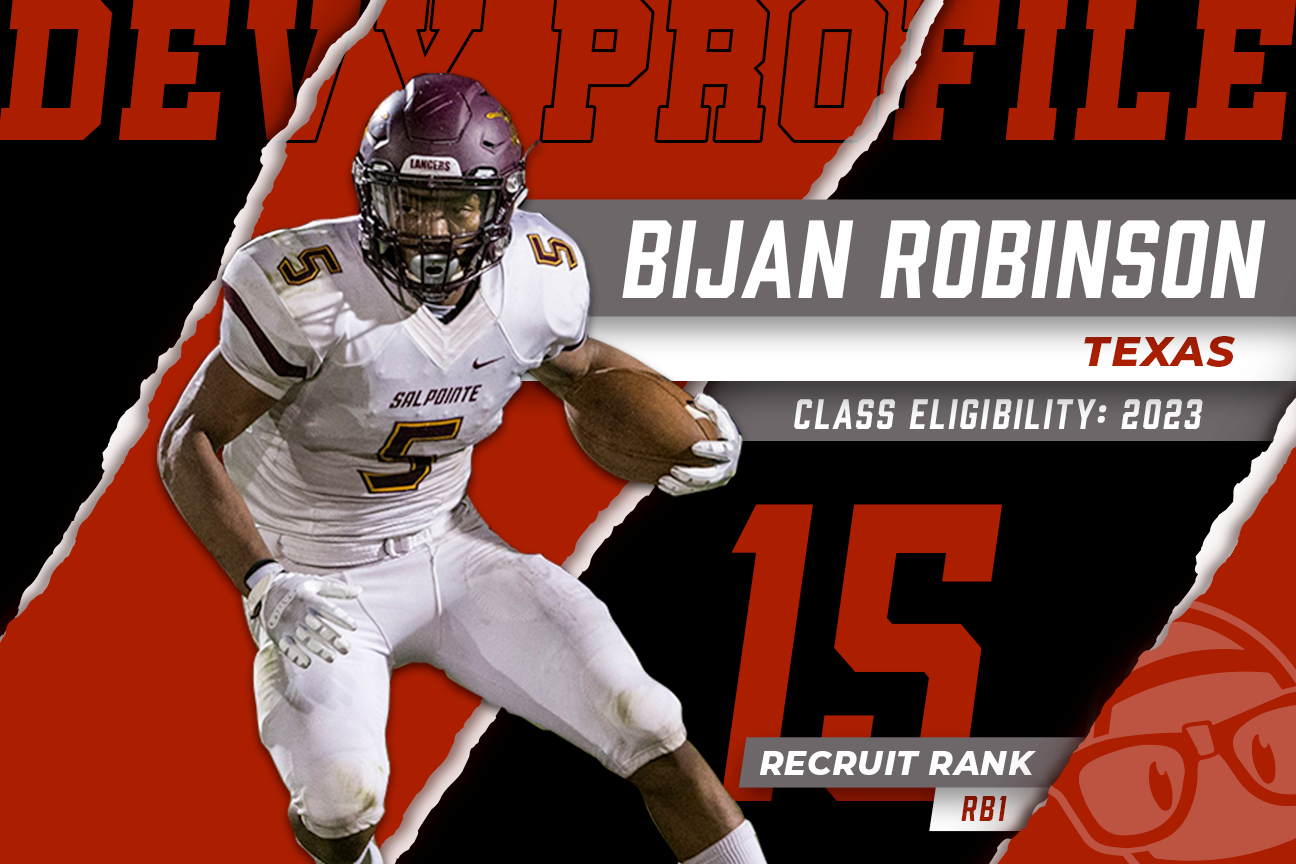 Bijan Robinson is a special player. The #1 RB recruit in the country, the Salpointe Catholic, has spent the last four years stealing the souls of AZ high school opponents, and he’s bringing his game to the Texas Longhorns as a 2020 5-star commit.

Here’s the quick hits list of his HS accolades:

Bijan (which he wants you to pronounce “bi-zhan” with the soft J) seems like a genuinely great kid. He was nicknamed smiley by his mom. He does community service like handing out clothes to the homeless in his Tuscon community. His classmates and teachers describe him as humble; he posts scripture to his Instagram and talks about using football as a platform to help people.

It’s even more impossible to deny his statistical greatness. He ran for more than 2000 yards each of his last three seasons, putting up 2549 yards and 41 TDs his senior year. Robinson gained nearly 8000 all-purpose yards and 51 TDs in his high school career. He averaged 12.9 YPC and 13.5 YPT.

At 6’0 200 lbs coming out of high school, Robinson has the ideal build for a 3-down back. He’s about the same weight as were Jonathan Taylor and Travis Etienne entering college. And he brings pedigree; Bijan’s uncle Paul Robinson played five years for the Cincinnati Bengals.

His athletic testing isn’t anything to write home about, though his 36.8″ high jump is quite good. His 4.77 40 time isn’t good, but it doesn’t match up with his play speed; he’s not a track guy, so his score might reflect a lack of training at the event rather than a real lack of speed. If he can’t improve upon that time, it’ll be a killer for his draft profile (NFL backs don’t succeed with 40 times in the 4.7 range), but Robinson’s combine is a long way away. He’s got time to work on it.

Bijan’s film nothing but fun to watch. Let’s check out some plays that highlight his traits.

Bijan’s not going down with arm tackles, and that’s not going to change in the NCAA. As he bursts through the hole, he stiff-arms one of the DTs into the dirt; still, my favorite thing here is the way Robinson sets up the DBs once he hits the second level. Watch him sell the move to the inside just enough to freeze the safety, setting him up for a footrace to the endzone.

One of my favorite analysts for RBs is @angelofantasy. If you read his work, you hear a lot about movement skills and problem-solving. That’s how Bijan wins; he doesn’t run defenders over or run by them, but he has incredible vision and fluid, creative problem-solving. He reads the defenders, sets them up, and makes economical movements to gain angles and elude his would-be-tacklers. His change of direction ability and acceleration is fantastic.

Here’s another nice run between the tackles. He drags two defenders at least five yards here.

I count nine different defenders that Robinson avoids here, using a variety of tools. The chain of cuts he puts together to get through the scrum is impressive.

Wait, who is that running that 15-yard dig route, creating separation with his break, and going up to get the ball in traffic? Yup. That’s Bijan. What does Robinson’s pass-catching upside look like in college and the NFL if he’s running real routes in high school?

Robinson’s current devy ADP as per DevyWatch is 45th overall, RB16. In our current C2C draft, I traded up a few spots to get him right in this range, taking him with the 42nd pick of the draft.

I want the best players; particularly in C2C, I don’t mind waiting an extra year to get a guy that will likely be a top-5 pick in dynasty rookie drafts.

And that’s Bijan’s upside. A lot can happen in three years, but now he has as good a chance to be the ’23 RB1. Look what happened this year: the elusive pass-catching back Clyde Edwards Helaire leapfrogged his classmates to be the first back off the board in the NFL draft and most rookie drafts as well.

Robinson brings that same skill-set; he’s elusive, a good runner between the tackles, and a great pass-catcher. His high-end comps are Dalvin Cook and Kareem Hunt; his low-end comp is a David Montgomery.

My biggest fear for his future success is his lack of top-end speed. You want an elite back to be easily running away from high school kids, and there are reps on tape with DBs keeping up with him. All the tools are there for Robinson to be a 3-down back and succeed at the highest levels of football, but he needs to improve on his 40 time to be a high-round draft pick. I ran comps for an RB running 4.7+, and they’re not pretty; the highlights are Matt Asiata, LeGarrette Blount, and Rex Burkhead. A couple of decent players, but not the guys I want my RB1 grouped with.