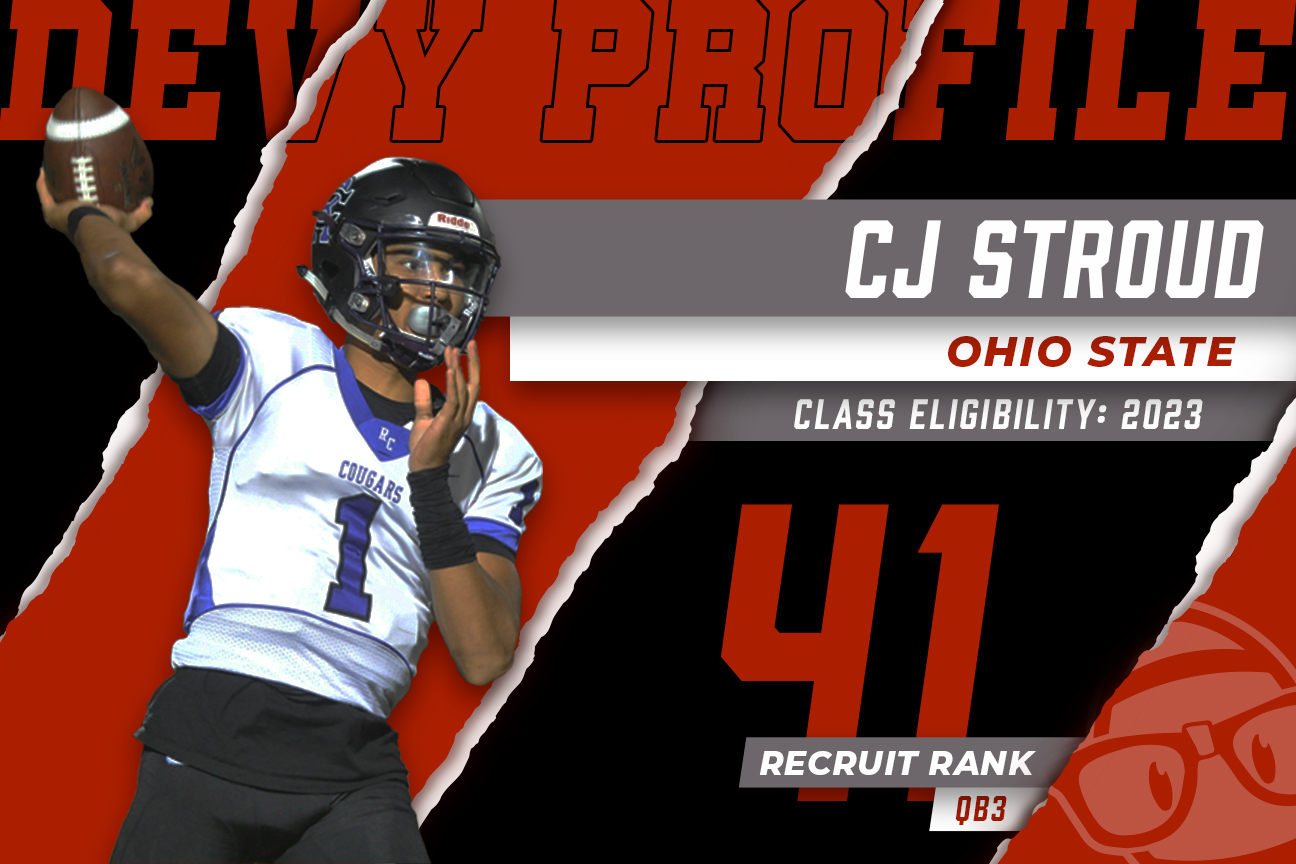 CJ Stroud is a four-star prospect out of Rancho Cucamonga, California. Stroud is the third-ranked QB of the 2020 class, and the 41st ranked prospect in the entire class per 247sports.com.

CJ Stroud had an incredible two years in high school as the starter for Rancho Cucamonga. He was a two-sport athlete known to be a good basketball player. He started his junior year for the varsity team, and his incredible play as a dual-threat quarterback earned him multiple accolades. He was invited to and made the All-American Bowl roster, Elite 11 Finals roster, and The Opening Finals roster. With his impressive high school career and outstanding showing at The Opening, he received a total of 19 college offers from multiple big program schools. He finally decided on The Ohio State Buckeyes and the offensive-minded head coach, Ryan Day.

C.J. Stroud committed to The Ohio State Buckeyes on December 18th, 2019, joining one of the better offenses in college football. Stroud joins an already loaded quarterback room with six other quarterbacks already on the roster. However, Stroud is the best of the bunch, other than Justin Fields. While Stroud will sit behind Fields for the 2021 season, he has the inside track to succeed Fields, in my opinion, due to his skill set. He has a chance to be the quarterback for not only a power offense but loaded weapons such as Julian Fleming, Garret Wilson, Jaxon Smith- Njigba, and Gee Scott Jr. Likely one of, if not the best wide receiver rooms in college football.

Poise in the Pocket

Stroud has shown some excellent pocket presence. While he can extend plays outside the pocket, he continually showed the ability to step up, avoid the rush, and keep his eyes downfield. If he can translate that to the college game, he’ll continue to progress into a top tier QB prospect.

Stroud has the athletic ability to not just move around in the pocket but get outside the pocket to extend the play. He has shown to keep his eyes down the field and can fire the ball off platform with decent accuracy.

Stroud has a cannon and a nice, easy, and fluid throwing motion. Stroud can hit all three areas of the field with zip and accuracy. He excels at throwing the deep ball. He is still young in his development, but already showing this kind of potential is exciting.

Per Devywatch.com C.J. Stroud’s ADP is sitting at 67.42. Stroud is a freshman, and while he has all the tools and promise, we need to see him grow. He sits in my ranks right now at 60, but it is hard to grab someone with three years and expect them to grow.

C.J. Stroud joins a loaded Ohio State team. As a freshman, he will have to sit behind another young growing QB in Justin Fields. A year of learning the offense and growing with a core of young weapons who have also been added should lean toward Stroud taking over in 2021. Stroud has the chance to be an incredible young QB in a high powered offense at Ohio State. If he continues to progress upwards, he could be the top of the 2023 QB class.

That completes my devy freshman profile on QB C.J. Stroud. If you’d like to see more of my thoughts on devy players, you can follow me on twitter @SportsfanaticMB. You can also hear me on my podcast, the Fantasy Football Roundtable, where we discuss all the latest NFL news and prospects.

My Draft, My Story and the Quest for the Golden Ticket
Devy Profile: Theo Johnson, TE Penn State