Electric running back Chris Tyree joins the Fighting Irish hoping to be the answer in the backfield. @DevyDeets lays out the freshman’s prospects. 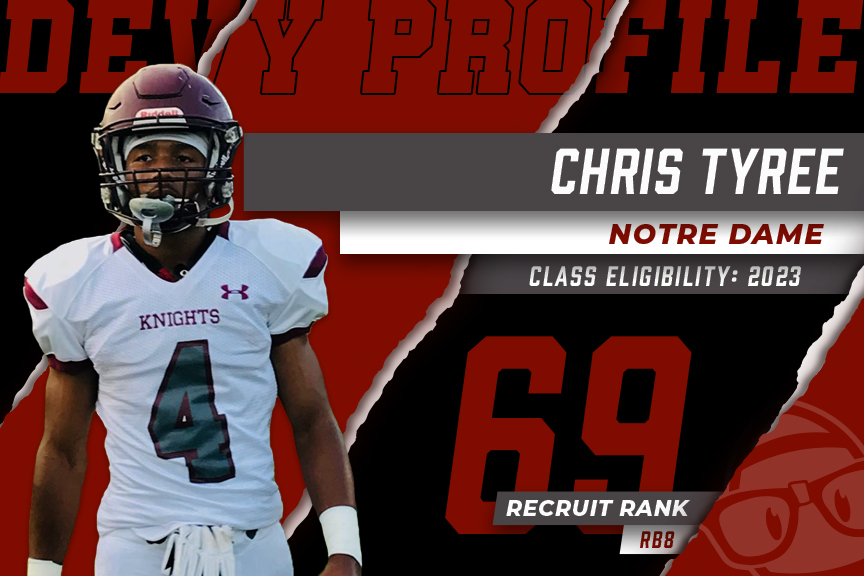 Over the past few seasons, Notre Dame has competed at a high level in the regular season but fallen just short of the elite college football programs. The Irish have typically been strong in the trenches and have produced a fair amount of talent at the skill positions, but have lacked that extra skill and speed that teams like Alabama and Clemson have possessed in spades. Going into this offseason, Head Coach Brian Kelly made those elements a priority and succeeded when he secured the signing of 4 star running back Chris Tyree, the #1 All-Purpose Back in the nation. He is the highest-rated APB Notre Dame has signed during Kelly’s tenure and the highest overall back since Greg Bryant in 2013.

Hailing from the D.C metro area rich in talent, Tyree has been a dominant force since his freshman year of high school, when he averaged over 7 yards per carry. He received his first division one offer that offseason, and they continued to roll in over the following three years. Standing at 5’10 and 179 pounds, he looks more like a slot corner than a dynamic running back, until you see him with the ball in his hands. He’s spent the past several summers working out with fellow locals Greg Dortch (LA Rams) and CJ Prosise (Seattle), who have both praised both his work ethic and his ability as a football player.

Tyree starred as both a running back and defensive back during his time at Thomas Dale High School, earning all-area honors at both positions. His senior season was cut short by a high ankle sprain that he suffered early in the year. Regardless, he still averaged 9.2 yards per carry and helped lead Thomas Dale to the state 6A quarterfinals.

In addition to his successful high school football career, Tyree is also an accomplished track star. In March, he defended his state championship in the 55-meter dash at the Virginia Indoor Track Championships. He ran one of the fastest times in the country as a senior. In addition, he ran several relays and competed in the long jump and did well in these events.

Following an impressive high school career, Tyree was selected to play in the Polynesian Bowl and the Under Armour All-American Bowl. He’s the rare high profile recruit to play in both, highlighting his willingness to play and compete.

Ultimately, his decision came down to Alabama, Oklahoma, and Notre Dame but he chose the Fighting Irish over the other programs.

In the Adam Sandler remake of “The Longest Yard,” one of Sandler’s fellow inmates, Unger, declares that a member of the prison team is, “Fast. Really really fast. He’s so fast he makes fast people look not fast.” Unger may as well be talking about Chris Tyree in that scene, as his most noticeable trait is his speed. At The Opening Finals in 2018 and 2019, he was crowned fastest man, clocking a laser-timed sub 4.4 40 yard dash. His shuttle time and vertical were also in the upper percentiles for high school running backs, which translates to the field. His size is not ideal, but it is adequate, and his frame probably allows him to put on 10-12 pounds without severely impacting his athletic ability.

Tyree is not just fast without pads. His speed translates to the field, and he is clearly the fastest guy on tape the majority of the time. He uses it to great effect as a ball carrier, a receiver, and as a returner. It is truly fun to watch a guy with a sixth gear when everyone else only has five.

Many speed guys rely solely on their athletic gifts to make a difference, and it doesn’t always translate to college or the pros. Luckily for Tyree, he has other attributes that he uses to great effect. His pacing as he sets up blocks and cuts is exceptional and is devastating when paired with his top-end speed. He is not a one-speed guy.

Tyree has a good feel for the running back position, showing solid vision and making himself small to avoid contact and slip through holes. Once through, he bursts toward the second level, and he can be difficult to stop.

Tyree sifts through traffic well, picking up extra yardage in situations where there does not appear to be any. He uses that smaller stature to great effect.

He is a plus kick returner, where he can showcase his ability in the open field and an understanding of angles. If he makes one or two guys miss, he is off to the races. It is a race that he usually wins.

As the title “All-Purpose Back” suggests, Tyree is quite the well-rounded player. In high school, he was often split out as a receiver, and it shows. He has good hands and does not look out of place, split out wide. That versatility will help him get on the field quickly for Notre Dame.

You can tell he is comfortable as a receiver by how he can quickly transition from a receiver to a ball carrier. His first movement after the catch is typically upfield, and he has shown that he can set up defenders with his initial movement. Although there are not many clips of him in contested catch situations, it is a skill that is not necessary at his size and the way he is likely to be used.

Because Tony Jones left this offseason for the draft, junior Jafar Armstrong is the top returning running back and presumptive starter. After Armstrong, the depth chart is relatively murky. Notre Dame does have several utility backs that can handle more of a supporting role with Armstrong as the early-down guy. Still, none possess the athleticism and game-breaking ability that Tyree has. He does have extensive experience as a kick and punt returner so he could be relegated to that role at first.

Tyree is rather light at only 179 pounds, so it is a possibility that he redshirts his first year on campus to bulk a bit and adjust to the college game. That should not hurt his long term value. In fact, a redshirt year may help him in the long run. Regardless, as the #1 APB in the class, it is unlikely that he is truly recruited over during his time on campus, even if he ends up in a 1a/1b situation.

Tyree has been banged up the past year or two, which raises doubts about his ability to handle a full workload at the next level. He projects as a guy that Notre Dame will use all across the offense to create mismatches. Notre Dame will probably get him involved in some capacity next season, even if it is just to return kicks and the occasional passing down on offense. His speed will be his biggest asset, but it is not his only one. Paired with plus burst, good vision, and strong pass-catching ability, Tyree should contribute significantly during his time with the Fighting Irish. His NFL stock will directly correlate with his ability to fill out his frame a bit while still maintaining his superior athletic gifts.