Cincinnati Bearcats have been regularly putting players into the NFL. Is QB Evan Prater starting hte journey to join that list. @DevyDeets gives you the preview. 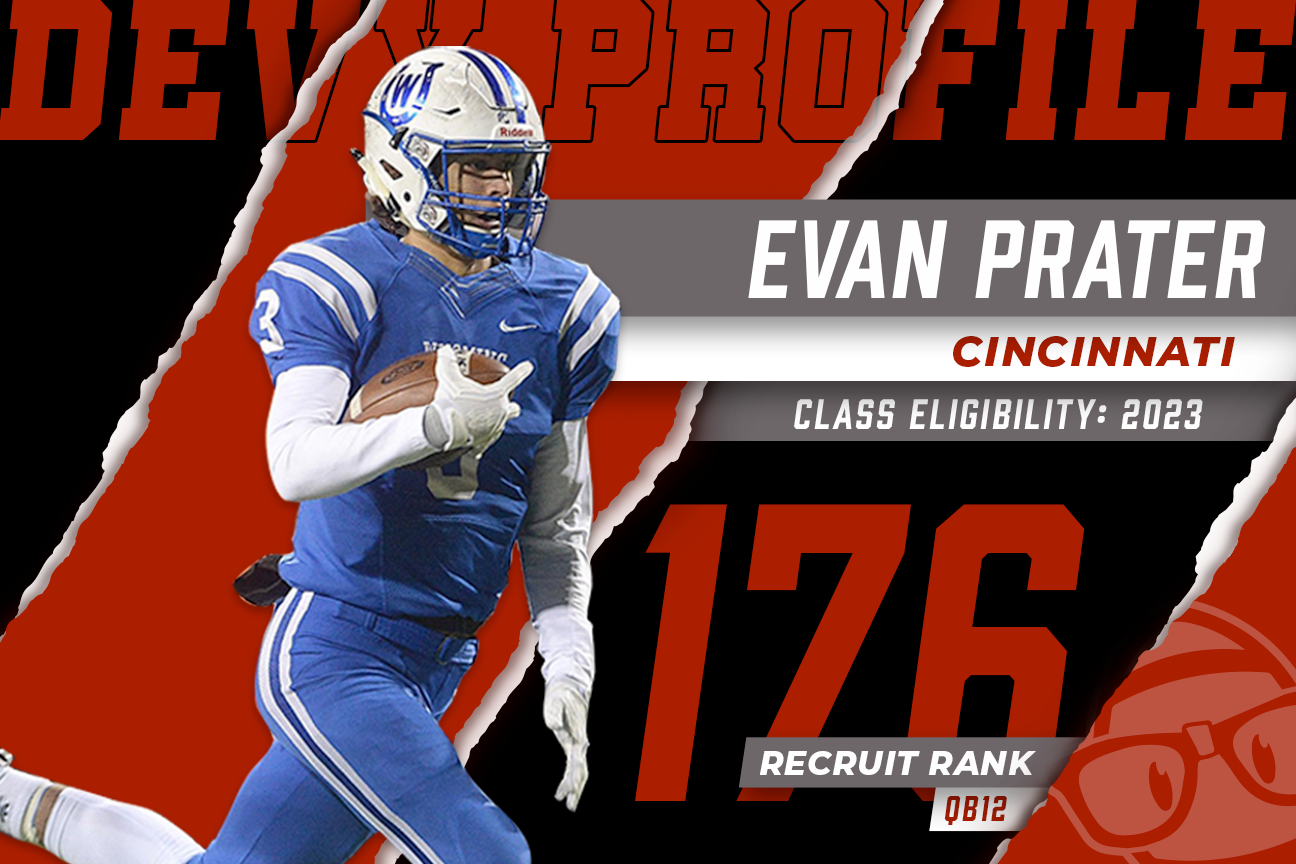 Although Cincinnati may not produce multiple early draft picks each year, the Bearcats have had several solid prospects the past few years: the Kelce brothers both attended the school along with fringe roster guys like Mike Boone (Vikings), Chris Moore (Ravens), and Devin Gray (Falcons). Michael Warren III and Josiah Deguara join that group in 2019, showing the progress that the program has made in recent years. Head Coach Luke Fickell has continued to do a great job on the recruiting trail, bringing in a 2020 class that ranks 40th in the nation*, ahead of Power Five programs like Michigan State (43rd), Missouri (50), and USC (55!) and contains several NFL hopefuls.

The crown jewel of Cincinnati’s 2020 recruiting class is four-star, dual-threat quarterback Evan Prater. Hailing from local Wyoming High School, the 6’5″ dual-sport star dominated Ohio football after claiming the starting job for good as a sophomore. As a junior in 2018, Prater led his school to an undefeated record and the Division IV Championship, where he rushed for 242 yards and three touchdowns to seal the win. Although his team did not quite duplicate that success in 2019, Prater bested his previous year’s numbers in almost every category. Ultimately, Wyoming High School was 40-2 with him as a starter.

On top of his team’s success, Prater has quite the list of personal accolades. He finished as an all-area nominee each year he started, was named Ohio’s Mr. Football in 2019, and participated in the All-American Bowl. All of this production led to twenty-two D1 offers, including those from Power 5 schools like Michigan State, Pittsburgh, Georgia Tech, and Miami. After a little deliberation, Prater elected to stay close to home and play for the Bearcats.

Although his passing stats do not pop off the page, Prater was generally efficient with his attempts, throwing a touchdown on roughly one out of every seventh throw. On top of that efficiency, his rushing stats would be great for a running back, let alone a QB. He finished the 2019-2020 season with more rushing attempts than passing, which will surely change as he develops as a passer in college.

As his high school statistics suggest, Prater is a huge threat with his legs. Wyoming’s offense was built on his ability to run and extend plays and included double-digit designed QB runs in each of the games that I watched. Prater is a physical runner who utilizes a strong stiff-arm and has high-end tackle breaking ability.

His game is an odd mixture of open field elusiveness and tackle breaking physicality, making it difficult to find a player comparison.

Although he is a strong runner, Prater does not showcase breakaway speed. He is unlikely to ever be a true big-play threat in college, although he may break the occasional long run. However, his side-to-side agility is very good for an athlete his size, and he has great toughness. Prater will need to develop more as a passer to become an NFL prospect.

Prater shows some of the building blocks necessary to be a high-end passer. His arm strength is immediately apparent. He can put plenty of zip on short and intermediate throws, although his windup can get a bit long on throws deeper down the field.

He does occasionally put too much air on his deep passes. He will need to fix it at the next level, as those passes will turn into interceptions quickly. Gaining consistency with his footwork and lower body mechanics should help with that.

He also shows the ability to work through reads, at least at a rudimentary level. It was very apparent from watching his high school offense that he was asked to make one read, maybe two, and then take off if that read was not open.

He is not afraid to throw a ball into tight coverage and can drop the ball into windows that others may not be comfortable with. He does quite well, placing the ball between underneath coverage and a safety closing over the top.

Although it is inconsistent, he keeps his eyes downfield while under pressure and delivers the ball downfield.

He has very good ball placement and rarely puts the ball in danger’s way.

Prater has many things that evaluators are looking for in a passer; a strong arm, good ball placement, and a solid mental base that should improve with coaching over the next several years.

For players that are a bit rawer, opportunity is key to unlocking their full potential. Prater enters the perfect situation for his development with Cincy. The Bearcats bring back 2019 starter Desmond Ridder, a solid starter with NFL aspirations. However, he struggled in 2019, and if he struggles again in 2020, he may not enter 2021 as the starter. The team also brings back Ben Bryant, the rocket-armed sophomore that stepped in against Memphis last season when Ridder was injured and showcased the good (20/32 passing for 229 yards and a touchdown) and the bad (3 total turnovers). The situation will likely allow Prater to redshirt his first year and develop more as a passer. Barring injuries, expect to see Prater in 2021 at the earliest.

Prater is a difficult player to compare, as his rushing style and size are fairly unique for quarterbacks. His playstyle is similar to that of Daniel Jones coming out of high school, although Jones was not the prospect that Prater was when he entered college. Both were big-armed quarterbacks with the open field ability to threaten opposing defenses every time they touched the ball. However, Prater will need to work on his mechanics and the mental aspects of the game to make the same jump that Jones did.

Evan Prater has all of the tools to succeed and grow at Cincinnati, and the depth chart provides an excellent opportunity to learn before seeing significant playing time. His skill-set should fare well in college as more offenses require mobile quarterbacks to threaten increasingly athletic defenses. According to devy ADP at Devy Watch, Prater should go undrafted in most shallow to mid-sized devy leagues, but he is an intriguing stash for those looking for lots of upside late or in campus to canton leagues.