Demond Demas is a social media star. Let @SportsfanaticMB tell you why he’ll be a star on the football field too. 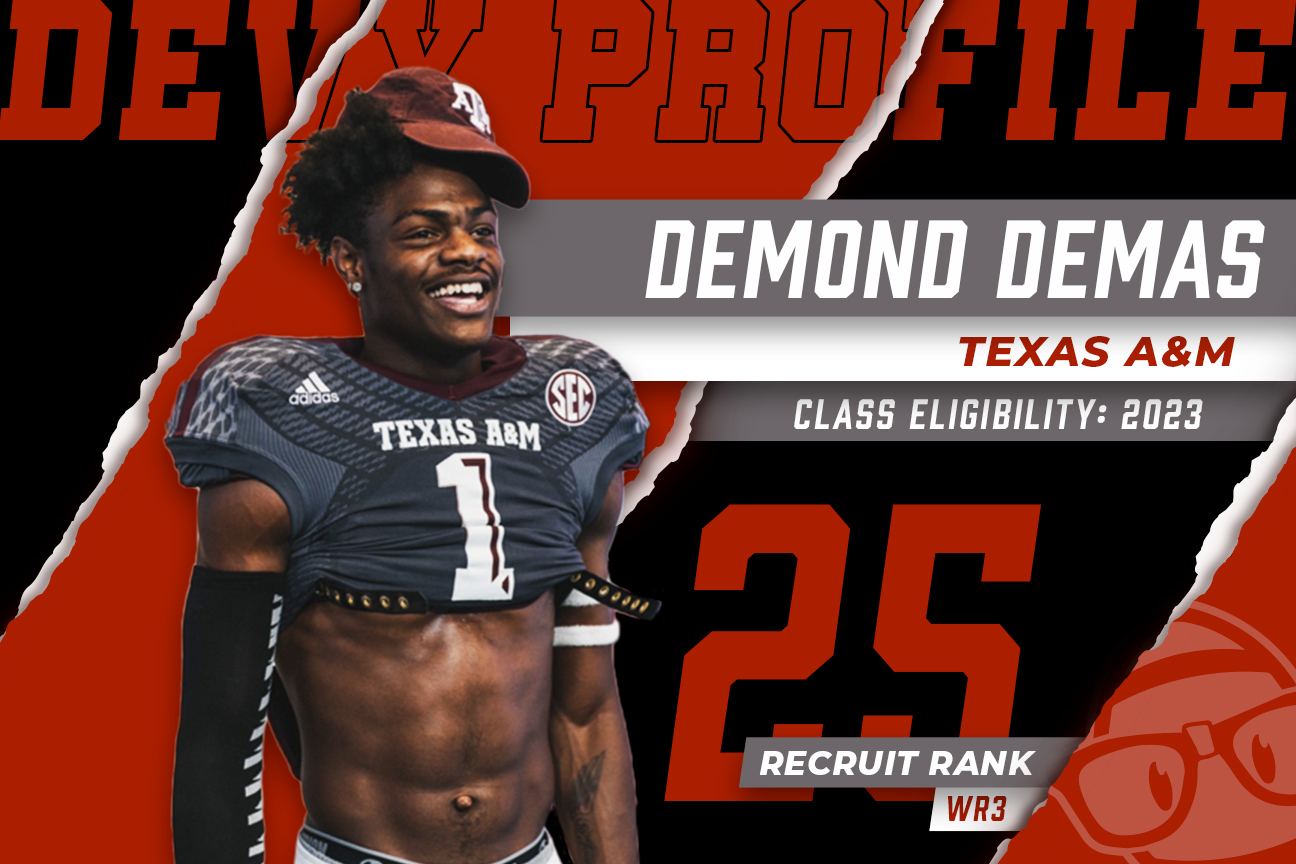 Demond Demas is a freshman wide receiver out of Tomball, Texas. Demond ranks as the 25th prospect in the overall 2020 high school class, the fourth-best player in Texas, and the third-best wide receiver prospect per 247sports.com.

Demas had a decorated high school career. While in Houston, TX at North Forest high school his freshman through junior year Demas:

As a senior, he transferred to Tomball high school and was ruled ineligible to play. However, his junior season stats and accolades throughout high school were enough to gain him honors for multiple high profile events, including the Polynesian Bowl, All-American Bowl, and The Opening Finals.

While he wasn’t able to play football his senior season his viral social media post where he showcased his talents on and off the field helped land him an incredible 57 college offers. After a meeting with Jimbo Fisher, Demas signed his letter of intent to play for the Aggies on December 18th, 2019.

Demas easily becomes the best wide receiver on the team. This doesn’t mean immediate production though. Jhamon Ausbon will likely still be the top target for quarterback Kellen Mond and he will also likely feed talented tight end Jalen Wydermyer.

\Moving Demas to third in line for targets wouldn’t be a bad thing with his explosiveness and talent. However, Mond throwing him the ball presents another slight issue. Mond struggles with accuracy which could limit Demas as a true freshman in the Aggies offense. While year one could be a struggle, Demas has some of the best vertical explosion in the game and is an absolute physical freak. Get ready for the 2021 breakout season.

Demas is explosive in this kick return. He shows off his speed down the sideline and eliminates multiple pursuit angles for defenders. Add in the ease and nastiness of the stiff arm at the end; it’s pure gold.

Demas constantly puts his basketball and track and field skills to use on the football field. In this clip, you see him use that vertical leaping ability with ease. This will be huge in the red zone for the Aggies.

Demas has the ability to get off the line quick and his straight-line speed is tops in the class. Teams will have to look to bracket coverage over him to help eliminate his ability to run by defenders.

Demas has the vertical ability but also the strength and hands to easily come down with contested catches. While it won’t be this easy at the next level, Demas should still excel at it when given the chance.

Per Devywatch.com, Demond Demas’s current ADP is 56.71 overall and the 21st wide receiver off the board. This is low for me. I currently have Demas ranked at 36th overall in my devy ranks.

If you are taking Demas early you will have to wait at least three years before you can add him to your dynasty roster. That being said, Demas is a truly remarkable athlete and football player.

While I do believe he will make some highlight-worthy plays in 2020, I don’t think he makes a huge impact until 2021. Getting a more accurate quarterback will help and we could see a truly great battle between him and Fleming for the best WR in the 2023 class.

That completes my devy freshman profile on WR Demond Demas. If you’d like to see more of my thoughts on devy players you can follow me on twitter @SportsfanaticMB. You can also hear me on my podcast the Fantasy Football Roundtable where we discuss all the latest NFL news and prospects.