E.J. Smith is be overlooked in devy. Let @SportsfanaticMB tell you why Smith could be a stud in college and the NFL just like his father. 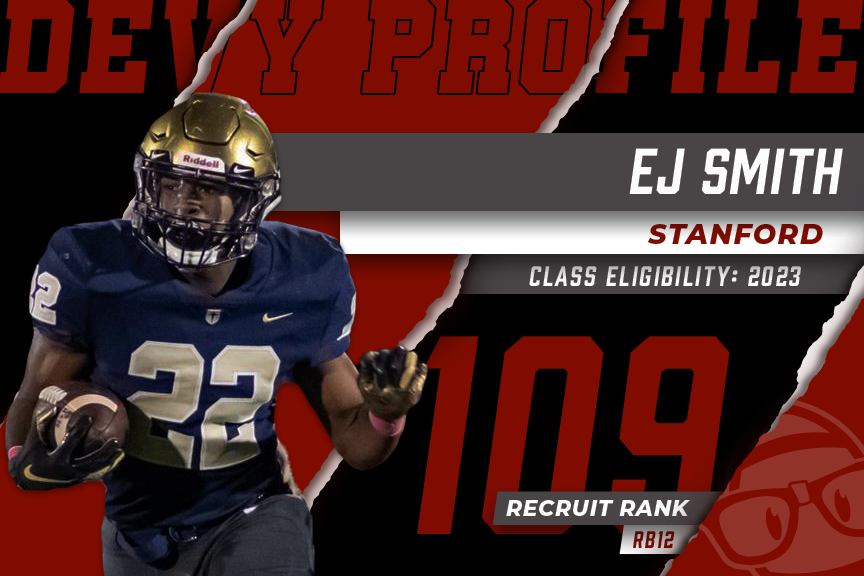 Emmitt James Smith IV, better known as E.J. Smith, is the son of the Hall of Fame running back Emmitt Smith and is a running back out of Dallas, Texas. Smith is the 109th ranked National prospect and 2nd ranked APB (All-Purpose Back.)

Based on his family lineage, he has had a ton of expectations heaped on him from others outside of his family. In high school, Smith proved he could be an incredible runner but also an astonishing receiver out of the backfield. In fact, at times playing wide receiver when needed. His first real breakout was his sophomore year 2017, where he ended up winning multiple awards such as 2017 District 9-6A Newcomer of the Year, 2017 All-State Selections, and 2017 MaxPreps Sophomore All-American.

As his junior year approached, Smith was continuing to build a name for himself. While statistically, his junior season was a step-down, he continued to be a stud for Jesuit high school earning him the 2018 Team Most Valuable Player. He received the 2018 Second Team All-District award as well.

In his senior season, he continued to pile up the awards, notching two more to his high school career: 2019 Unanimous First Team All-District and 2019 District 9-6A Offensive Player of the Year. Smith lettered in three seasons in football. All of these accolades and play led to him getting invited to play in the 2020 Under Armour All-American Game and made it to The Opening Finals roster in Dallas, Texas.

After a great showing in the Under Armour All-American game and The Opening finals (which unfortunately had no verified results for him.) Smith received 22 offers from college universities.

Many thought E.J. would follow in his father’s footsteps and go to Miami. However, his father and mother were very supportive in letting him pick whatever school he felt was best for him. E.J. decided to go with Stanford based on the relationship he developed with running backs coach Ron Gould.

Smith joins as a top-end high school prospect. There are currently five other running backs on the roster with varied skill sets. In my opinion, this was a great landing spot for Smith. He may not be the best pure runner of this group, but he brings a lot to the table. He also is the best pass-catching back out of this group. While he may see limited time running the ball in 2020, I believe Smith is the most dynamic weapon out of Stanford’s backfield. He should see playing time immediately for Stanford and should make an impact for them this season.

Smith has incredible hands and is an amazing receiver out of the backfield. At times at Jesuit, he was even asked to play receiver. He runs excellent routes and, when needed, will go up for a 50/50 ball.

Smith shows excellent vision and patience when needed. Allowing him to wait for holes to develop and the burst to get through them will make him fun to watch at the next level.

Smith possesses top-end speed. Once in the open field, he continually eliminates defender’s pursuit angles and rarely gets caught from behind. Smith has the speed to get to the outside quickly and turn upfield and gain a ton of yards. In the open field, he has a variety of juke moves to make defenders miss, and a decent stiff arm for a slighter running back.

Per Devywatch.com, E.J. Smith’s current ADP is 112.85 overall and the 44th running back off the board. Both of those are a little lower than my rank of E.J. Smith. I currently have him ranked as the 98th player on my board and the 42nd running back overall. While you will still have to wait three years to see Smith’s NFL value, he should hit the field his true freshman season for Stanford.

Stanford has produced some talented backs for the NFL level. While I wouldn’t compare him to CMC, I do think Smith has close to his value at the same point in their careers. None of the current running backs for Stanford standout at all to me. Smith could quickly come in and show his skill and dominate the backfield. Even if he doesn’t win the starting job in 2020, the position should be all his in 2021. While 2023 is a few years away, his skill set matched with his possible early playing time should work great for Smith. He is undervalued in the RB class of 2023, and I could easily see him being a stud at the next level. Now is your likely last chance to buy him before the season starts.

That completes my devy freshman profile on RB E.J. Smith of Stanford. If you’d like to see more of my thoughts on devy players you can follow me on twitter @SportsfanaticMB. You can also hear me on my podcast the Fantasy Football Roundtable where we discuss all the latest NFL news and prospects.