Ethan Garbers heads to University of Washington for his freshman season. @fatpoust checks out the quarterbacks future. 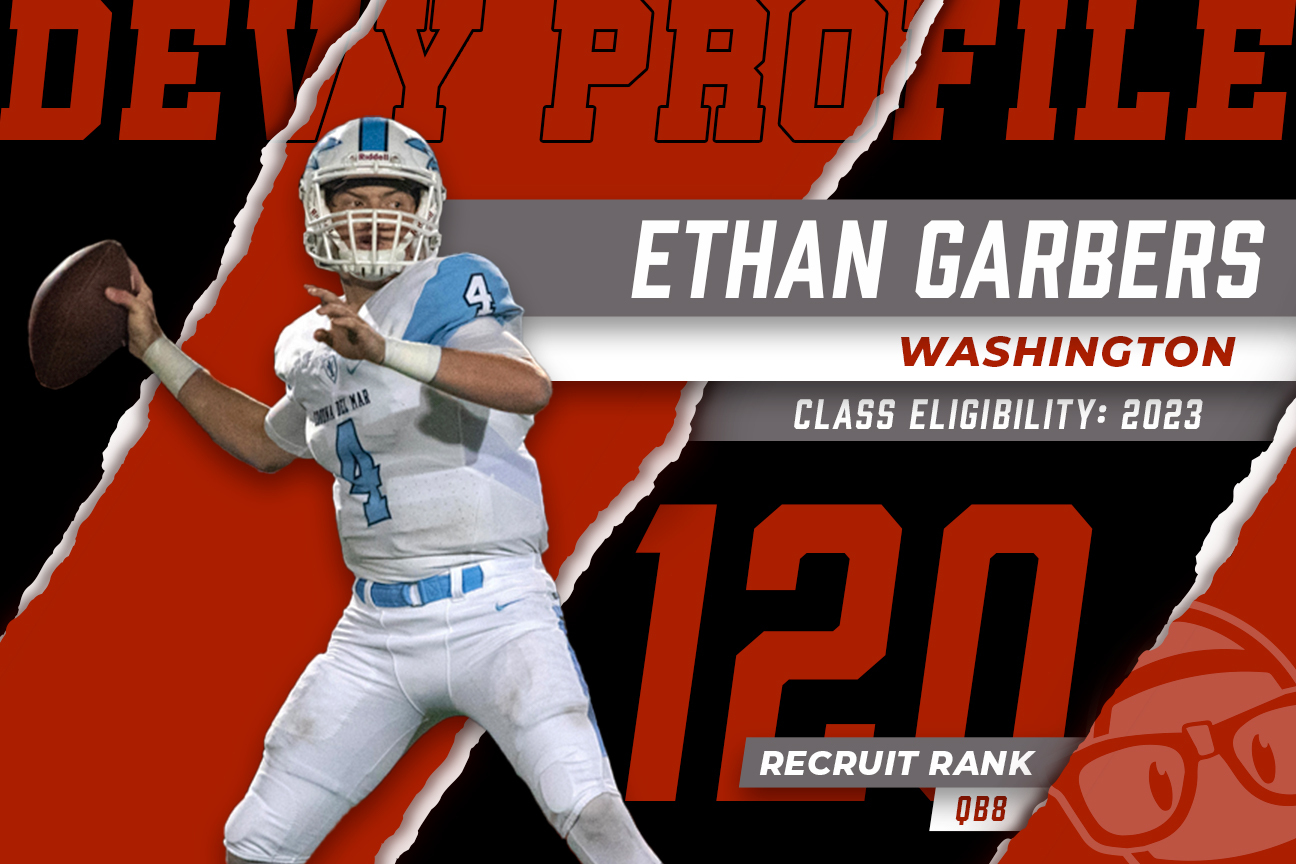 Let me get this out of the way early. Ethan’s older brother, Chase, is currently the starting quarterback at the University of California. Although Chase is an underrated player and has been productive for the Golden Bears so far, I do not think it is fair to discredit Ethan’s game by merely referring to him as “Chase’s little brother.” Ethan possesses some intriguing traits that translate to the next level, and I have little doubt that he will challenge for the starting quarterback position at Washington.

Similar to his brother, Ethan’s high school career did not start as he initially hoped. He did not earn the starting quarterback role until his junior year. Up until that point, the 5’11 175-pound Nathaniel Espinoza orchestrated the Corona del Mar offense. Espinoza ended up studying at the University of Oregon after his playing career at Golden West C.C, a junior college in Huntingdon Beach, CA.

Upon Espinoza’s graduation, the quarterback competition opened up, and Garbers seized the opportunity. The Newport Beach, CA native, went on to put up massive production in his two seasons as the full-time starter. The young signal-callers stock exploded after his junior season, and offers from all over, including Georgia, Miami, and Utah, piled up in hopes of securing his commitment.

According to 247Sports Composite, Garbers ended the recruiting cycle as the #4 Pro-style quarterback in the class behind DJ Uiagalelei (Clemson), CJ Stroud (Ohio State), and Harrison Bailey (Tennessee). He was a member of Nike’s “The Opening” Finals roster as well as an Elite 11 finalist.

Many have become captivated by Garbers’ potential at the next level, including me. Let us dive into what makes Ethan such a talented player.

Garbers capped off a story-book senior season by being named Second Team MaxPreps All-American. Leading the Sea Kings to an undefeated 16-0 record, including a Division 1A CIP State Championship and Division 3 CIF Southern Championship, Garbers put up video game-like numbers in his final season with Corona del Mar High School. Throwing for over 5000 yards and 71 touchdowns to only seven interceptions is almost unheard of, and combined with his 12 scores on the ground, Garbers proved to be one of the premier quarterbacks in the country.

It is important to note that while Garbers’ statistical production was extraordinary, Corona del Mar had a myriad of talented options in the receiving game. His go-to guy was John Humphries, a 6’5 210-pound Stanford commit who brought in 111 receptions for 2001 yards and 32 touchdowns as a senior. Garbers also relied on fellow Washington signee Adam Redman, a tight end who added 72 receptions for 979 yards and 13 touchdowns. This dynamic duo accounted for 54% of Garbers’ completions, 59% of his passing yards, and 63% of his touchdowns.

The departure of multi-year starter Jacob Eason triggers an opportunity for Garbers to make an immediate impact. However, this will not be a simple task, as Coach Jimmy Lake has a pair of talented returning quarterbacks vying to fill Eason’s role. Redshirt sophomore Jacob Sirmon was the #6 Pro-style quarterback in the 2018 class, and his 6’4 235-pound frame combined with an absolute Howitzer of an arm resembles Eason from a physical standpoint. Add in redshirt freshman Dylan Morris, the #4 Pro-style quarterback in the class of 2018, who threw for more career passing yards than Jacob Eason during his high school career, and the quarterback room in Seattle is stocked with talent. And that is not even counting Sam Huard, the #1 Pro-style passer in the class of 2021 who is committed to Washington.

Garbers enrolled early at Washington, which gives him the advantaging of dissecting the new playbook and becoming familiar with the Huskies’ scheme. He has reportedly gained 15-20 pounds since the end of his senior campaign and currently sits at 205. While I think Garbers is best suited getting up to the 215-220 range, he is beginning to look like a legitimate PAC 12 quarterback. The comparisons to Jake Browning are going to be evident, and they do share some common traits in terms of physical profile, throwing style, and high school productivity. Still, if Garbers wants to follow in Browning’s footsteps and become only the third true freshman to start at quarterback for the Huskies, he will certainly have to earn it.

When reviewing Garbers’ film, the first thing that jumped off the screen to me was his composure under pressure. He is not afraid to remain in the pocket and absorb contact when waiting for his passing lanes to open up.

Poise is a difficult trait to learn, but Garbers seems to have it at this stage of his development. Plays like this often happened, as it seemed like defenses began to take their frustration out on him. Garbers remains strong in the pocket and delivers an accurate pass.

I love me a quarterback who is not afraid to dish out some contact when he can. Garbers has that competitive fire that all coaches look for in a leader.

Not only does he have the poise in the pocket, Garbers naturally senses pressure and has shown great escapability when under duress.

Indisputably, it will not come this easy at the next level, but Garbers is quite creative in these improvisational situations, and his eyes are always downfield.

He understands when to step up in the pocket, and Garbers quickly recognizes alternative escape routes.

Garbers is slippery and uses an array of subtle movements that buy him just enough time to get passes off under pressure.

Accuracy On The Run

Garbers is very comfortable rolling out of the pocket and has a knack for delivering accurate throws on the run.

His movements coming out of play-action seem very natural, and his throwing motion maintains fluidity even when his feet are not set. So smooth.

When he does have enough time to set his feet out of play-action, Garbers quickly resets and can deliver a pretty deep ball.

While Garbers is far from an explosive athlete, he is undoubtedly capable of making defenses pay with his feet when left unaccounted for.

Garbers has a little wiggle in his game, and he is quietly deceptive when evading defenders one-on-one.

Ethan Garbers has a legitimate chance of being the starter when the Huskies host Michigan in the opener. This quarterback battle might be one of the most heated in college football this season, as any of the three guys could end up winning the job. One good thing is Head Coach Jimmy Lake, and new offensive coordinator John Donovan are installing a new offense. Donovan has yet to see any of the returning quarterbacks throw in live-action, which levels the playing field for Garbers to an extent.

Although he is free based on Devy Watch ADP, I would not be comfortable spending any devy draft capital on Garbers until we hear more news out of camp. His long-term value is reliant on his ability to win the job outright and produce from day one. With the addition of Sam Huard next year, the quarterback room becomes even more crowded, so it is essential Garber performs well early.

With the uncertainty of how the spring football schedule is going to work, Garbers will need to make sure he is polished. He’ll have to make the most of his opportunities when the competition ensues. Still, if he manages to look the part in year one, Garbers has an intriguing blend of poise and presence, and his ability to naturally evade pressure and make accurate throws on the run could make Huskies fans happy for years to come.