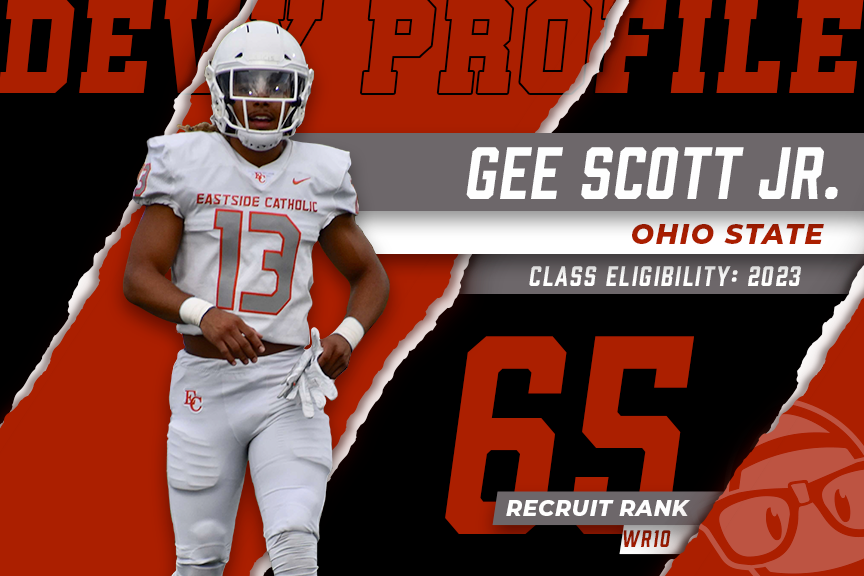 Gee Scott Jr. is a wide receiver out of Sammamish, Washington. Scott is the 65th ranked prospect and the 10th wide receiver in the 2020 prospect class per 247sports.com.

Gee Scott Jr. became quite the star for his high school team Eastside Catholic. While not much production came in his freshman season (when he also played basketball), he played a pivotal part in their offense in his sophomore through senior seasons. He helped lead them to back to back state championships, including a Geico Bowl Series victory over Arizona powerhouse Centennial.

He credits his work ethic and his domination at the HS level to his father and Seattle Seahawk football players he has been able to be around. His success led to him getting a whopping 20 offers from colleges to play wide receiver.

Gee Scott Jr. signed his letter of intent to the Ohio State Buckeyes on December 18th, 2019. He joins an already loaded wide-receiver room of not just veteran college players but also the top wide-receiver recruits in his class. Junior Chris Olave (WR-X) and Sophomore Garrett Wilson (WR-Z) are virtual locks outside of injury for the Buckeyes. Ryan Day (Head Coach) will likely have three wide receivers on the field consistently. Even with all the talent at WR at Ohio State, the third WR spot is open for competition.

The slot role will come down to a battle between three players: Senior Demario McCall, freshman Jaxon Smith-Njigba, and Gee Scott Jr; I believe the battle will be between the two freshmen. Smith-Njigba is a five-star recruit and was rated higher than Scott Jr. in the recruiting process. Scott, on the other hand, comes in as the perfect build and WR type for the slot role for Ohio State. I wouldn’t be surprised if Scott won the role, but even if he doesn’t he should be a fixture of the offense starting in 2021.

Scott is one of the most polished route runners in this class and is downright surgical when running routes. In this clip, I love how he gives a quick stutter step before he moves his entire body to sell the outside route before cutting back inside, all while not losing any speed. His ability to slow down and track the ball as well in this clip is impressive.

I love the move here by Scott Jr. to sell the deep route, then with a quick four-step stop and turn he gets the ball on the comeback for an easy 15 yard gain. Granted, he was helped here by the loose coverage by the cornerback. It’s a smart play by Scott in the end.

While this wouldn’t have been a catch at the NFL level, it qualifies as inbounds in high school and college. He does a great job extending hands and getting high as possible while keeping his one foot inbounds for the touchdown.

Scott’s use of the spin move at the start of the route was a great move to get himself open. It is spectacular to track the ball and catch it while trying to slow down while also going to the ground. It highlights his ability to use his body control in all areas while showing off that once that football hits his hands he’s not letting go.

I love his awareness here to not keep one but two feet inbounds here for the touchdown. Has lets ball get into his body and holds it tight to his chest as he falls out of bounds.

Gee Scott Jr. runs with some serious toughness. He looks like a bully out there on the field and, it goes hand in hand with his ability to pick up yards after the catch, as he is rarely brought down by just one player.

Here is a nasty stiff-arm by Scott Jr., one of many he laid down on defenders in his time in high school.

Scott could have easily gone down with the first hit here but continues to fight. He turns what could have been a four-yard play into a 12 yard gain by fighting off defenders and keeping his legs moving.

Everyone loves an excellent hurdle, and Scott efficiently clears his defender here. His background in basketball likely helped helps. It’s just another skill in his impressive arsenal.

Per Devywatch.com ADP, on Gee Scott Jr. is currently 109.84. That seems a bit low for me. My current rank of Scott is WR27 and the 70th player off my board. I only have him so low because he’s a freshman, and you’ll have to wait three years to get value for him at the NFL level. I could see him going higher if you don’t want to take some veteran college players with less upside than Scott projects to have.

While I could see Scott carving out some playing time in 2020, his path should be clear in 2021. As stated above, I love the toughness that Scott plays with, which usually leads to him getting some serious YAC. His hands and body control should get him on the field, and I think his skill set will work well in the short to intermediate-area for Ohio State. He’ll fit in well with the offense Ryan Day likes to run and could help out the new QB taking over for Fields next season. OSU has helped WR’s continue to grow their abilities, and if Scott continues to grow, he could be a day two or late day one NFL draft pick.

That completes my devy freshman profile on WR Gee Scott Jr. of Ohio State. If you’d like to see more of my thoughts on devy players you can follow me on twitter @SportsfanaticMB. You can also hear me on my podcast the Fantasy Football Roundtable where we discuss all the latest NFL news and prospects.