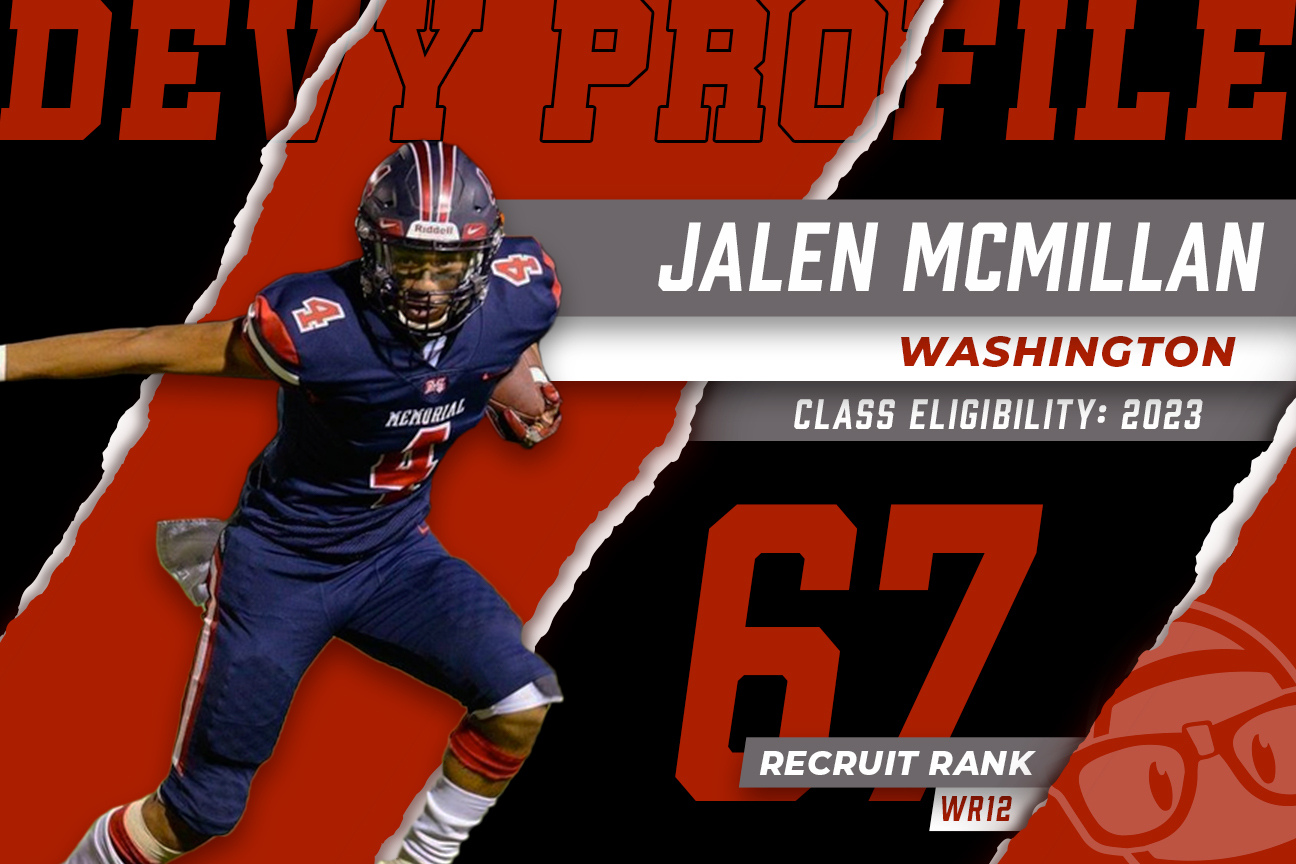 Washington’s Junior Adams has a knack for finding unknown prospects and developing them into incredibly productive pass-catchers. As the wide receivers coach for Eastern Washington, he recruited a kid out of Davis High School in Yakima, Washington.

This zero-star recruit was a complete unknown to all major recruiting services, only receiving two offers from EWU and Idaho State. After a redshirt season working with Adams, the kid broke out in a significant way, recording 93 receptions for 1691 yards and 21 touchdowns. This player would break 26 Eastern Washington records, 11 Big Sky Conference records, and 15 FCS receiving records. This player, Cooper Kupp, credited Adams for seeing his potential and shifting his mindset, allowing him to transform into the player he is today. Adams went on to coach the receivers at Boise State, where he was responsible for the recruitment of Cedric Wilson from the junior college ranks and overseeing the development of Thomas Sperbeck, the Bronco’s all-time leader in receiving yards.

Washington hired wide receivers coach Junior Adams before the 2019 season. The fact is none of the previously-mentioned players possess the raw talent and pedigree of freshman receiver Jalen McMillan. As the sixth-ranked receiver in the 2020 class, according to 247Sports, McMillan comes to Seattle after capping off an illustrious career at San Joaquin Memorial High School. The Fresno, California native was a three-sport athlete for the Panthers, including a division one baseball prospect with offers from Arizona, Oregon, California, and USC. Despite the recent increased recruiting efforts from Notre Dame, Oklahoma, and USC, McMillan has remained loyal to Huskies Nation. Why is McMillan such a coveted recruit? You will find out shortly.

McMillan was named to the CalHiSports All-State first team after putting up over 1,600 yards and 12 touchdowns as a senior and being selected to play in the prestigious Under Armour All-American game. The Panthers fell to Serra, 28-18, in the CIF D1-A Norcal Championship game, but McMillan still managed to reel in nine catches for 113 yards.

McMillan was a pivotal element to a San Joaquin Memorial offense tasked to replace their starting quarterback (Alec Trujillo – San Jose State), running back (Leonard Glass – Iowa State), and McMillan’s partner on the outside (Josh Kelly – Fresno State). Fortunately for Head Coach Anthony Goston, a few 2021 recruits stepped up and made enormous impacts for the Panthers. Quarterback Finn Collins, an Arizona State commit, played better than expected in his first year orchestrating the offense, throwing for over 3500 yards and 39 touchdowns.

Running back Jordan Hornbeak, who has received offers from Washington, California, and Utah, ran for almost 1,700 yards and 18 touchdowns while averaging 7.7 yards per carry. Fresno State signee Mac Dalena recorded 69 receptions for 1,212 yards on the year while leading the team with 19 touchdowns. Although there were several weapons on the San Joaquin Memorial offense, defenses in the Valley knew that McMillan was the guy, the engine that drove the Panthers.

McMillan enters a wide-open receiver room at Washington. As new Head Coach, Jimmy Lake is tasked with replacing some critical members of the Huskies offense. Aaron Fuller’s 59 receptions and six touchdowns led the way in 2019, while tight end Hunter Bryant’s team-high 825 receiving yards need to be replaced. Factor in Andre Baccellia (29/314/4) and Chico McClatcher (13/102/1), and you start to realize that there is enormous potential for McMillan to be a key contributor from day one.

Terrell Bynum is the most experienced receiver coming back in 2020 and will likely receive an increase in targets (31/368/2 in ’19). Behind Bynum, Washington has a pair of four-star prospects in their arsenal, but the production has yet to be seen. I imagine Puka Nacua, a 6-foot-1 210-pound sophomore who started to put it together towards the end of last season before the injury, will step up to alleviate the departed production. Marquis Spiker is a big 6-foot-3 weapon on the outside who played in ten games last season, but he only recorded three total receptions. Besides Jordan Chinn (3/98/2), the Huskies do not currently have many weapons to spread the field vertically and take the top off of a defense.

McMillan is an intriguing option because he possesses such an incredibly multifaceted skill-set. He carries the frame and second-level speed to project as a legitimate deep-threat play-maker. As you will soon understand, his footwork and nuanced route-running insinuate that he can be particularly dangerous in the short and intermediate game.

McMillan’s nuanced route-running at such an early stage in his development jumps off the screen. He understands how to use his body positioning to attack leverage and utilizes quick feet on his breaks and releases.

In this clip, McMillan lines up at the top of the screen in the 3X1 formation. He threatens the vertical route, forcing the cornerback to open up his hips to the sideline. Separating at the top of the stem with a swim move inside, McMillan gets flat out of his break and makes it an easy throw for his quarterback.

Defensive backs have to respect his deep speed, and he understands how to use this to his advantage. Displaying quick feet chopping down at the top of the stem and accelerating quickly out of his break, McMillan runs a picture-perfect dig route.

McMillan lines up on the backside of the 3X1 formation, and I absolutely love this rep. He uses his eyes to manipulate the safety into thinking he is running the shallow cross. With one step, he adjusts mid-route and squeezes the slant between the combo man coverage, topping it off with excellent body extension on the grab.

If you do not get your hands on McMillan early, you have zero chance. Here, he freezes the cornerback with quick feet and wins easily to the outside.

To go along with his advanced route-running, McMillan possesses a long, rangy frame, capable of extending up and making catches above-the-rim. Even in the rare situations where he does not gain separation, he is still capable of snatching jump-balls with his body control and concentration.

McMillan is at the bottom of the screen, running a vertical route. He does a fantastic job shielding the defender with his body and extending up for the grab at the front corner of the end zone. This awkward body contortion is not as easy as he makes it appear.

Here he is running the go-route on the right side of the screen. McMillan does a fantastic job tracking the ball and getting both feet down along the boundary. Oh, and by the way, this was from his freshman year.

McMillan’s game revolves around technique and finesse, but I cannot discredit how tough he is at the catch point. Here, he is at the top of the screen reeling in the grab despite taking a brutal hit from the safety.

His above-average wingspan allows him to feast in contested catch situations. Whether it is Jacob Sirmon, Dylan Morris, or freshman Ethan Garbers out there at quarterback, McMillan will likely win their trust early.

As evidenced by his 4.53 40 and his 10.67 100m, McMillan’s track background allows him to make plays that other receivers in the class simply cannot. He eats up so much space in such a short amount of time, and he is quite elusive after the catch.

McMillan is at the top of the screen on the backside of the 3X1 formation. Disregard the route and ball-tracking displayed on this rep — look how smooth of a runner he is once he gets the ball in his hands. McMillan’s long strides allow him to get downfield in a hurry, easily separating from defenders in pursuit.

McMillan lines up at the bottom of the screen as the outside receiver in the 2X2 formation. If you are going to run off-man coverage against him, you better have one hell of an athlete. McMillan gets to top speed very quickly, blowing past the defensive back with ease.

McMillan is just toying with the defense on this play. Lined up on the bottom of the screen, he runs a tunnel screen route from the 3X1 formation. He tends to bounce runs to the outside as much as possible, but for the most part, he is exceptionally creative after the catch.

This might seem like a ‘cop-out’ comparison. Still, I think McMillan has a very similar playing style to former Huskies receiver Dante Pettis. Pettis’ lean frame limited his ability to out-muscle physical defensive backs. However, his game relied on precise route-running and above-average long speed. He was a big-play threat any time he had the ball in his hands. While Pettis was genuinely gifted as a return specialist, McMillan demonstrates similar vision and has had success in the return game at the high school level. Pettis was a highly-regarded draft prospect and worthy of a top 50 selection in the 2018 Draft, but I have zero doubt that McMillan will end up the better player. I do think McMillan will find the most success in the slot. I do not believe he will be pigeon-holed as purely a slot receiver. McMillen has the ability to win downfield in contested situations.

McMillan has become one of my favorite receivers in the 2020 class. He possesses all the traits to be a three-level weapon in the Huskies’ passing game. Currently ranked at #110 on Devy Watch overall ADP (WR42), McMillan is worthy of a selection in all devy draft formats. McMillan is already being recognized with receivers like Arkansas’ Treylon Burks and North Carolina’s Dazz Newsome. I still think McMillan is being undervalued at this point. I believe he belongs in the WR30-35 range among the likes of Texas’ Jake Smith and 2023 receivers Rakim Jarrett (Maryland) and Kayshon Boutte (LSU). Behind Terrell Bynum, there is nothing solidified in the Washington passing offense. Enrolling early puts McMillan ahead of freshmen receivers Rome Odunze and Sawyer Racanelli. Look for him to contribute early and often. McMillan will develop into the quarterback’s best friend in Seattle for the foreseeable future. 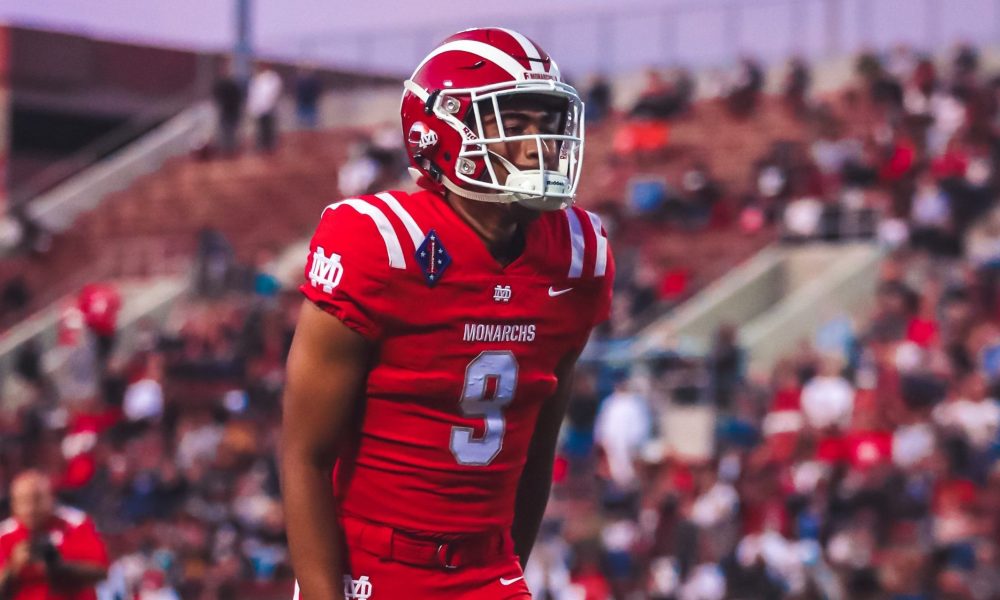