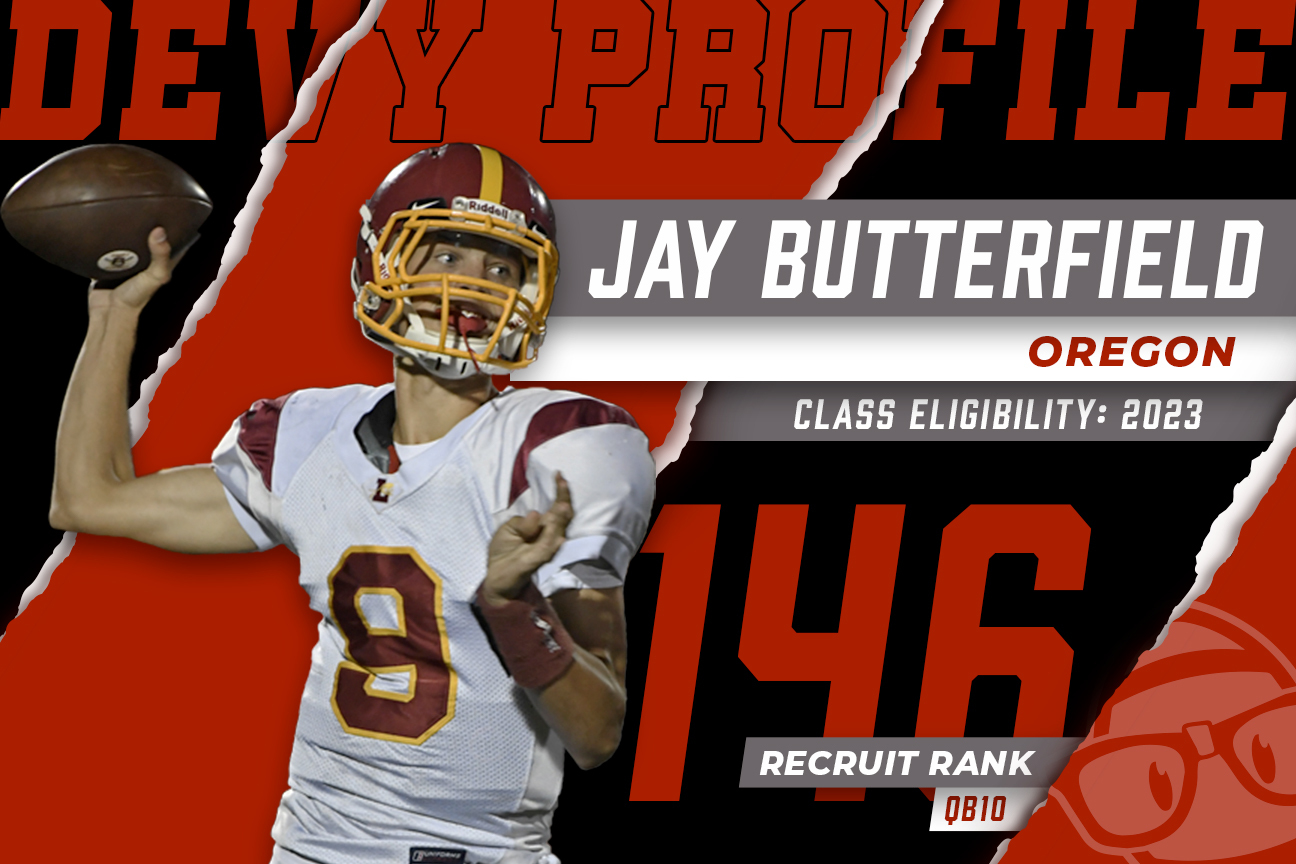 Oregon fans may consider Jay Butterfield to be merely a consolation prize after highly-touted five-star quarterback DJ Uiagalelei committed to Clemson. Uiagalelei had Oregon in his top two and even took an unofficial visit to Autzen Stadium for Oregon’s spring game.

While missing on Uiagalelei was no question, a disappointment for the Oregon program. Brentwood, California native Butterfield is undoubtedly a good get for Coach Mario Cristobal. Rated as the #5 pro-style quarterback in the Class of 2020 according to 247 Sports Composite, the consensus four-star comes to Eugene with heightened expectations.

The son of former Stanford and Chicago Bears quarterback Mark Butterfield, Jay, is the third-highest rated quarterback recruit in program history. The guys ahead of him? Kellen Clemens and Dennis Dixon, two players who had tremendous amounts of success for Oregon. What makes Butterfield so unique? Let’s check him out!

Butterfield did not have eye-popping statistical production during his three-year playing career at Liberty High School. His 32-5 record and 25 multi-touchdown games over his career suggest he is capable of winning football games. Butterfield was a two-time captain for the Lions and was named first-team All-Bay Valley during both his junior and senior years.

With the departure of Justin Herbert, the Ducks’ quarterback battle will be an interesting dynamic to follow this off-season. Because he decided to enroll early, Butterfield has the upper-hand on Robby Ashford, another freshman four-star prospect who is very talented in his own regard. Many consider redshirt sophomore Tyler Shough to be the favorite to replace Herbert. While Shough does possess some starting quarterback upside, his limited playing experience (five games – 53 snaps) provides some uncertainty.

If Cristobal was 100-percent locked in with Shough, I doubt he would have hit the transfer portal to grab Anthony Brown. Brown was a three-year starter from Boston College. Most likely, Shough will be the starter for 2020, and Butterfield will spend a year mastering the offense. Still, Butterfield has the tools to become a multi-year starter for the Ducks. He does not possess the athleticism of Herbert or even Shough, but he does have some traits that suggest that he can develop into an above-average pocket passer.

When comparing his mechanics to the other top quarterbacks in the class, Butterfield sits near the top. The silky-smooth over-the-top release is quick and snappy, and the ball comes out in a tight spiral consistently.

There is some refinement needed, particularly in his lower body, but I think new offensive coordinator Joe Moorhead will be pleasantly surprised in his overall mechanics.

Butterfield’s biggest strength lies in his spot-throwing ability in the vertical game. He seems to have a natural sense of route timing, as his passes tend to land in spots where only his receiver can make a play.

While he has shown the ability to drop passes in with precision and touch, Butterfield has enough arm strength to zip the ball into tight gaps when he needs to. A ton of his short and intermediate throws are delivered directly to the receiver’s facemask.

Oregon’s tempo offense requires their quarterbacks to be able to get the ball out fast and with high velocity, something I think Butterfield is more than capable of doing.

Butterfield makes it difficult for his receivers to drop passes. His ability to consistently make accurate throws along the boundary is one of the reasons why he was such a highly-coveted recruit.

Most high school quarterbacks are rough around the edges when it comes to going through full-field progressions. Many are tasked with going through one or two simple looks and checking the ball down. Butterfield is one of the outliers.

Butterfield already seems to grasp the importance of eye manipulation to lure safeties into vulnerable positions to open up coverage. He has shown a tremendous football IQ, and his calmness in the pocket translates to a relaxed demeanor when tasked to read defenses.

I do not think Butterfield gets enough credit for his ability to sense pressure and navigate up into the pocket. He is not a threat to escape pressure with speed, but Butterfield remains super calm and is not afraid to step up to buy some time.

In an offense that utilizes a ton of designed roll-outs and bootlegs, Butterfield may not seem like a seamless transition from Herbert. He is at his best when he is in the pocket surveying the field, although he is not entirely incapable of making plays when exiting the pocket, as shown in this clip.

What if I told you Glennon was a four-star prospect ranked as the #4 pro-style quarterback in the class of 2008? Would you believe me? Coming into N.C State, Glennon was almost a replica of Butterfield: a tall, lanky big-armed passer who can make all the throws in the book but possessed a rail-thin frame and limited mobility. I expect Butterfield to have a similar career path. He might not get the opportunity to compete early, like some of the other quarterbacks in the class. But, I think he could parlay a few years of solid production into being an eventual day two pick.

Butterfield is an unknown commodity at this point. The latest update of Devy Watch ADP did not have Butterfield ranked. I do think he does have the potential to be a multi-year starter for the Ducks. I also agree with the undrafted valuation. The fact is, it is unlikely that Butterfield touches the field for meaningful snaps this year unless something catastrophic happens to Shough (ADP 164 – QB34).

His body type suggests he will be able to pack on weight efficiently. But, it will take strength coach Aaron Feld a few years to transform Butterfield’s body. I really would not think about spending any type of devy draft capital on him at this stage.

In terms of pure arm talent, Butterfield is up there with the best in the class. However, I seriously doubt Cristobal throws him out there in year one. Since 1983, there have only been two Oregon quarterbacks to start a game as a true freshman: Chris Miller and Justin Herbert. Miller was drafted 13th overall by the Atlanta Falcons in 1987, and Herbert was drafted 6th by the Los Angeles Chargers. If Shough struggles, I would not be surprised if he gets a chance to showcase his arm at some point this year. As a result, keep an eye out for Butterfield to be more of a factor in 2021.