Gurley, Chubb, Michel, Swift… Is Kendall Milton the next in a long line of UGA running backs? @sportsfanaticmb gives up he rundown on the incoming freshman running back. 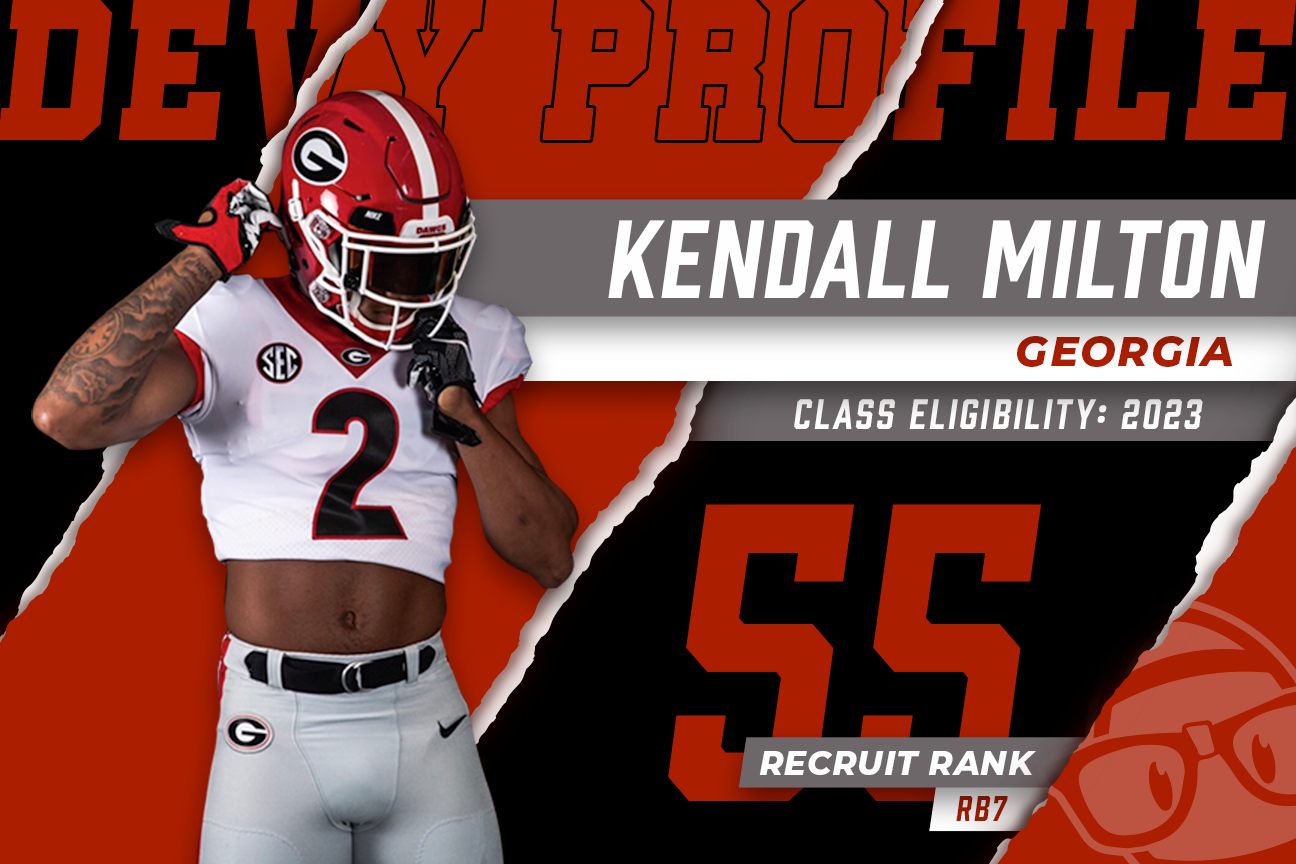 Kendall Milton is a running back out of Clovis, California. He is currently ranked as the 53rd player in the nation and the 7th player at the running back position per 247Sports.com.

In his senior season, he led the Bears to a 10-3 record. Milton was named to the 2019 MaxPreps Preseason All-American First Team Offense. All of his accomplishments led to being invited to The Opening Finals, where he earned the “Alpha Dog” award for the top daily RB during the showcase.

These are Milton’s verified results from The Opening Finals in Dallas, Texas.

Milton joined a running back room at Georgia with multiple highly rated prospects, which isn’t ideal for a running back. James Cook (4 stars out of H/S), a junior in the 2020 season, and Zamir White (5 stars out of H/S) and a sophomore in 2020 are the likely leaders for the starting job at Georgia. Cook and White can head to the NFL after this year, and to me, all signs point to Zamir being the starter in 2020. All this means likely outside of injury; we won’t see much of Milton on the field in 2020.

Zamir White is Milton’s competition. White came to Georgia with more hype than Milton, and by most experts, is considered the better prospect. However, we’ve seen in Georgia’s past that they can use a multiple RB system and that both can succeed in college and the NFL. In just the past few years, these running backs have all split time at Georgia, and all are in the NFL, Todd Gurley, Nick Chubb, Sony Michel, and D’Andre Swift. I have faith Cook, White, and Milton can split time in the 2020 season, and all can be highly productive.

Milton has an intriguing mix of speed and elusiveness. In fact, when you put his tape on, it immediately jumps out at you. He consistently makes the first defender miss and is almost always off to the races. A move you will see him use consistently here is the jump cut. I would argue in this 2020 class, Milton might be the most elusive. He has top-end speed for a big back, which you want to see out of a big back.

Milton has excellent contact balance for a player his size. He does run a bit upright at times, which worries me. However, Milton can take a hit and not lose any momentum. He does a good job absorbing hits and moving not just on big runs, but also keeping his feet moving when he gets wrapped up to pick up those few extra yards.

In all these clips, you can see defenders hitting Milton around the line of scrimmage or after. In each Milton continues to move forward, barely losing momentum or speed. While in the middle video taking defenders down with him. He has an elite mixture of speed, balance, and power that should truly let him standout on Saturdays.

Milton shows excellent vision from the backfield as well. He will hit holes as they open or make cutbacks before they are open. In the open field, he is almost impossible to bring down. He does a great job of eliminating any pursuit angles and moves like he knows what the defender is going to do.

While this run he does get a bit lucky with the touchdown, I love his cutback and up to hit the open lane running down defenders for the touchdown.

His patience here is vital in allowing the hole to develop and then hitting it for the eventual touchdown.

Per Devywatch.com, Milton has an ADP of 58.89. That is right on par with where I have Milton in my ranks. He currently ranks as my 21st RB and my 50th player overall. I could see Milton going higher being in the running back factory that Georgia has become. Much like these other freshman backs, you’ll have to wait at least three years for them to return NFL potential.

Kendall Milton brings an intriguing mixture of speed, balance, and power that should see him getting significant playing time no later than 2021. However, outside of injury, he will likely split time with another talented RB in Zamir White. I think Milton can showcase his skills enough to stand out in 2020 to secure the backfield as the lead back in 2021. Once that happens, assuming he continues to grow and evolve his game, he should be right at the top or in consideration for the top RB in the 2023 NFL draft class.

That completes my devy freshman profile on RB Kendall Milton of Georgia. If you’d like to see more of my thoughts on devy players, follow me on twitter @SportsfanaticMB. You can also hear me on my podcast, the Fantasy Football Roundtable, where we discuss all the latest NFL news and prospects.