Matt Corral is one of the most polarizing players in college football. @Alex2TheSimpson breaks down his strengths, where he needs to improve, and what his NFL future might look like. 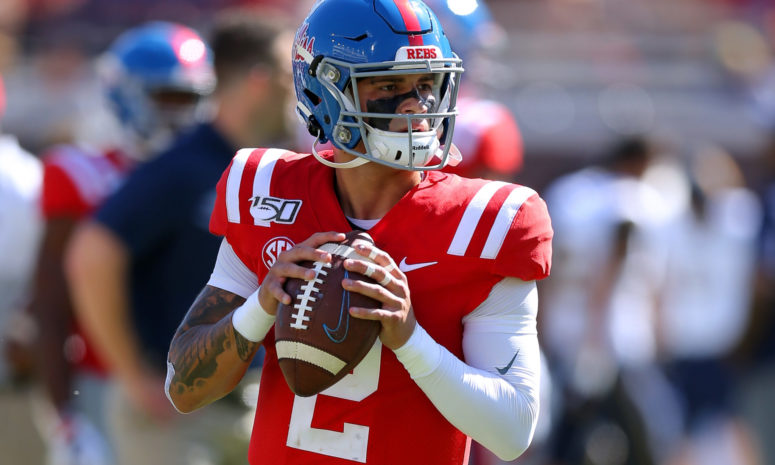 Matt Corral has been a hot name in fantasy football after his breakout 2020 season. This article will give you my thoughts on the Ole Miss quarterback and where he might fit in on your teams. First, we’ll take a brief look at his high school career and recruiting process. We’ll look at his performance, dive into what he does well and where he needs to improve, and why he’s so polarizing in the dynasty and devy communities.

Matt Corral had a standout career at Oaks Christian School (CA), where he played until the end of his junior year. After an incident occurred during his junior year, Corral and his family felt it would be best to leave the school. He transferred to Long Beach Poly, also in California, for his final year of high school. He threw for 2,495 yards and 29 touchdowns and was named to the U.S. Army All-American team.

Corral was a consensus four-star prospect and top-100 recruit by each of the major recruiting services. 247Sports Composite ranked him 60th in the entire country in the class of 2018. He was a finalist in the Elite 11 QB competition and made the 2017 Opening Finals.

Corral originally committed to the University of Southern California following his sophomore season. Both he and USC decided to part ways not long after. The summer prior to his senior season at Long Beach Poly, he decided to commit to the University of Florida, where things would eventually fall through again. A head coaching change in Gainesville led to him de-committing from Florida and signing with the University of Mississippi.

Corral redshirted as a true freshman in 2018. Thanks to a brand new NCAA rule, he was still able to appear in up to four games. He completed 16 of 22 passes for 239 yards, 2 touchdowns, and an interception while adding 83 yards and 2 touchdowns on the ground in those four games.

In 2019, Corral started four games and appeared in six more, bringing his total to ten games. He completed 105 of his 178 pass attempts for 1,362 yards, 6 touchdowns, and 3 interceptions. He also added on another 135 yards rushing and a touchdown.

Corral battled with John Rhys Plumlee for the starting job in 2020, where he would end up being named the starter. The redshirt sophomore had some spectacular highs and some humbling lows throughout the year. He completed 231 of 326 passes for 29 touchdowns, however, he also threw an alarming 14 interceptions. He racked up 506 yards and 4 more touchdowns on the ground, leading Ole Miss to a 5-5 record and an Outback Bowl win against #11 Indiana.

One thing you can’t teach is the natural ability to throw the football. His ability to drive the ball with velocity down the field and outside the hash marks is not something you see in every quarterback. Corral can make throws on the run and from different arm angles. There is a lot more to the quarterback position than having a strong arm, but it’s the one thing NFL talent evaluators drool over every year.

It’s getting more difficult to succeed in today’s game if you don’t have the athleticism to extend plays with your legs. Whether it be escaping the pocket and making a throw on the run or taking off and picking up what the defense gives you, mobility has become a safety net for young quarterbacks. They often struggle to read defenses pre-snap and quickly process information post-snap. It’s extremely rare for a rookie to be as mentally prepared as a veteran. If they’re able to lean on that athleticism while learning the nuances of the game, it makes it much easier to perform at a high level right away. As you’ll see below, Corral can escape the pocket and make two incredible throws on the run.

Despite having games where he would turn the ball over repeatedly, Corral always kept his head up. He may throw an interception on one play, but on the very next possession, he’s throwing the ball all over the field as if nothing happened. Later in this article, I mention how that self-belief will get him in trouble at times. With that being said, the last thing you want in your quarterback, or any player for that matter, is a guy that doesn’t believe in himself.

One of the more encouraging signs I’ve seen from Corral is his recall. In two of his post-game press conferences, reporters have asked him about a specific play. They may ask him about the defense he saw, a matchup he was looking for, or a decision he made. He remembered exactly what happened and what he was thinking in the moment in both instances. You don’t see that in many college quarterbacks, but every successful NFL quarterback has the ability to recall a particular play and walk you through their thought process, down to the smallest detail.

Corral tries too hard to be the master of deception. Sometimes he’ll make an insane no-look pass or have a nice pump fake to move a safety or linebacker to open up a throwing lane. Occasionally it works, but sometimes he’ll try way too hard to make a special play. Those poor decisions often lead to inaccurate throws and interceptions. Having the ability to fool defenses with your eyes and subtle fakes is an extraordinary tool to have, but you have to know when to use it and when to dial it back.

There are some throws throughout his tape where he trusts his arm too much. His confidence is great, but there are moments where he believes he can fit the ball in the smallest of windows. He will stare down his receivers on occasion, allowing defenders to follow his eyes and jump routes. A lot of young quarterbacks have an issue with believing in their arm too much, and they struggle to read defenses. That is something that takes time. Experience, good coaching, and hard work, both on and off the field, will help him improve in those areas.

One interesting thing I noticed about Corral is that his struggles come in lumps. He’s not all that inconsistent during a game. A large portion of his worst plays occurs in the same games.

As you can see, he was lights out for his first three games before a miserable performance at Arkansas and a poor outing against Auburn. Then he went on another three-game tear before the LSU game, where he threw five interceptions. He bounces back well each time, but you’d like to see him take care of the football on every possession.

In my most recent devy startup, I selected Corral as the 24th overall devy player. He was the eighth quarterback selected and the fourth quarterback in the class of 2022. Some people may think that’s too early. Still, in my honest opinion, he’s one of the top Heisman candidates for 2021, and he’s already performed at a high level against ranked teams such as Alabama, Florida, and Indiana. He is in a similar position that Jordan Love was in after his final season at Utah State. Teams will be intrigued by his ceiling, and if he can cut back on some of the mistakes, he has a good chance of being a first-round pick.

More often than not, Corral was dynamite. He goes through stretches of elite play in college football’s toughest conference. In his best games, you see a young superstar in the making, delivering NFL-caliber throws with accuracy, making good decisions, and using his athleticism to his advantage. Then you have the three games where 13 of his 14 interceptions happened, and you wonder if he has what it takes. You can’t ignore those three games, but in the other ten games he played, he threw for 23 touchdowns and only a single interception.

As Corral heads into his redshirt junior season, he is a prime candidate to make a huge leap as an NFL prospect. He’s already put himself firmly on the NFL’s radar as a potential first-round pick in 2022. Teams have seen the talent. Now they need to see him take care of the ball and cut down on those turnovers. If he can get better at reading defenses and take what he’s being given, the sky is the limit.