Michael Irvin, Reggie Wayne, and Andre Johnson, what do these great wide receivers have in common? The University of Miami. @jason_cambria is going to introduce you to the next great Miami product. 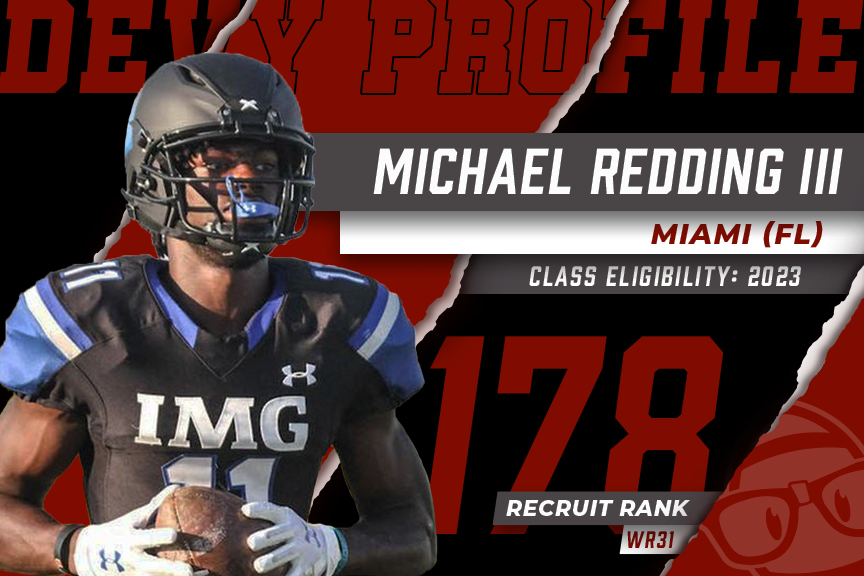 Who is Michael Redding III

Too often, you hear the cliché, “the sky is the limit” when talking about athletes. Well, for Michael Redding III, perhaps even outer space is not his limit. Redding held scholarship offers from many major colleges during his time at IMG Academy. When you’re 6’2” 194 pounds with 4.54 speed and a 41” vertical jump to boot, anyone can see why so many coaches wanted Redding to play for them. While Redding was turning heads at Nike’s The Opening and the Under Armour All-America Game with his rare athleticism, what he was looking for in a school went well beyond the football field.

Many in the recruiting community believed that Redding had all but made up his mind to go to Florida State. But there was one thing that the Seminoles could not offer Redding, Aerospace Engineering. Redding told 247sports that when he was making his final choice, he picked the University of Miami over Alabama, Michigan, Florida, and Florida State in no small part because Miami could offer him the specific engineering program Redding wants to major in. That’s right. When deciding where to take his talents in 2020, Miami was able to offer Redding the not just the world but everything above it as well.

Michael Redding III will now take the field for Miami in 2020. And, by all accounts, Redding is going to make his presence known sooner rather than later. Miami’s most dangerous receiver going into 2020 isn’t even a receiver. Tight end Jordan Brevin was a finalist for the Mackey award in 2019 and was named to the all-ACC first team. Jordan figures to be a primary target in the Hurricane’s passing attach in 2020.

At wide receiver, Dee Wiggins will most likely be Miami’s number one wide receiver and should be locked into a starting role for the Hurricanes this season. However, after Wiggins, Miami has a lot of question marks and uncertainty with their receivers. Two of Miami’s best from 2019, Jeff Thomas and K.J. Osborn, left Miami for NFL, and their production will need to be replaced. Outside of Wiggins and senior receiver, Mike Harley, Miami’s depth chart at wide receiver is anyone’s guess. This opportunity will offer Redding the chance to seize a significant role in the offense.

Additionally, in the offseason, Miami had a significant change in both, offensive philosophy and coaching staff. In 2019, under then offensive coordinator Dan Enos Miami was committed to a balanced offensive attack averaging 33.5 passes per game and 31.2 rushes per game. However, after finishing 2019 ranked 98th in total offense and 90th in scoring, Enos was out, and in came new offensive coordinator Rhett Lashlee. Lashlee brings to Miami his up-tempo wide-open offense, which will feature multiple wide receiver sets. Lashlee spent 2019 at SMU, where he guided the Mustangs to the number seven scoring offense at 41.8 points per game. SMU’s passing attach was anchored by Baltimore Ravens 2020 draft pick James Proche. Proche had 111 catches for over 1200 yards in 2019, and two more receivers had over 40 catches for the Mustangs.

Rhett Lashlee has the experience developing NFL caliber wide receivers, but so does new wide receivers coach Rob Likens. Before being hired by Miami, Likens had been the offensive coordinator for the Arizona State Sun Devils. While at Arizona State, Likens developed K’Neal Harry and Brandon Aiyuk into first-round NFL draft picks. Likens himself has coached alongside some of the brightest and most innovative offensive minds in college football, including air raid guru Mike Leach. In addition, to a new coaching staff, Miami will have a new quarterback in 2020 with the addition of Houston transfer D’Eriq King. The former Heisman hopeful should thrive in Miami’s wide-open offense and will have no problem getting the ball into his playmakers’ hands. With Lashlee and Likens running the passing game and King as the trigger man in Coral Gables, Michael Redding III will have every opportunity to flourish.

So, what makes Michael Redding III sure a good fit for Miami? Redding’s game is what every offensive coach is looking for. First, he already has the build of an NFL wide receiver at 6’2” 195 pounds and NFL speed having been officially clocked at 4.54 in the forty. While having these physical traits is nice, what makes Redding so special is that he knows how to use these traits to his advantage on the football field. Consistently, Redding can shield defenders away from the ball, which leads to his ability to win 50/50 balls regularly. Redding’s ability to win in isolation translates to all areas of the field, especially at the goal line.

What makes Redding even more dangerous as a deep-threat is his ability to track the football in the air. Downfield few defenders can match up with Redding. Redding quickly gets on defenders and gives his quarterback a big target. With Miami moving to a more aggressive offense, you can be sure the Miami coaches are going to want to get the ball Redding’s way.

However, Redding was not just running go route after go route at IMG; he was able to work all over the field. Throughout his time at IMG, Redding would line up both in the slot and out wide. This ability to play all over the field led to big play after big play for Redding. On the boundary, Redding would win with size and positioning, and in the slot, Redding just needed the ball in his hands, and he would run away from defenders.

And, just for the cherry on top of Redding’s game, he is more than a willing blocker. Michael Redding III fits perfectly with the new Miami offense and has all the tools to develop into the primary receiver for the Hurricanes.

Now that we know Michael Redding III is going to be a stud, what do we do with him in devy? According to devywatch.com, ADP Redding is going undrafted in devy drafts. Redding’s lack of hype is great news for those of us in the know, as he can be had for a flyer in the last round of your devy draft. Redding is precisely the player you want to target at the back end of a devy draft as he will see the field in 2020 for the Hurricanes but may not post big numbers. However, with Redding’s unique combination of pro-ready size and speed and the ability to work out of the slot and out wide, it’s only time before he is the featured receiver at Miami. If you don’t think Redding has what it takes to dominate at the next level, I leave you with this…