College football is back with some solid games in it’s opening weekend. Let @SportsfanaticMB explain what #devy players to watch in the top matchups. 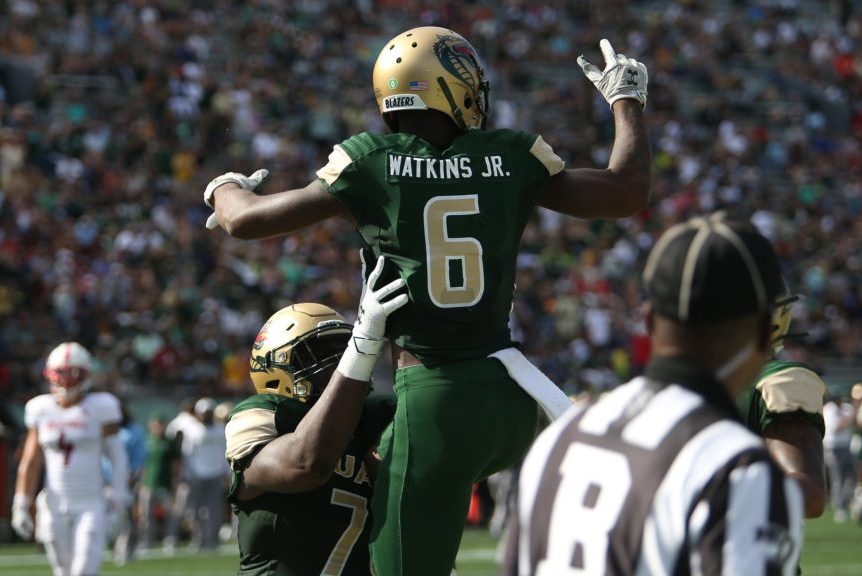 I think it’s fair to say 2020 has been a year we are all ready to forget. We have seen all kinds of turmoil around the college football season. We have seen some conferences decide to push through the pandemic while others were opting for postponing the season. While everything is still in motion and anything could happen, we know for sure we will be seeing college football this weekend. Having college football on Saturdays will return some of the normalcy to our lives, and I’m sure for those players. While we won’t see any of the major conferences play this weekend, we still have some good games on the books. For this article, I will run through all the games you will see in the coming days and which devy/draft prospects to watch.

This game should be a good one that goes down on Thursday night. While it will likely be completed by the time of the article, I would look at senior WR Austin Watkins for UAB. Mack has had a long journey in college, including some time in JUCO.

He proved last year in his junior season he can play at this level. He has good size and hands. I expect he has a big game Thursday night. Watkins is a low-end player to watch for the 2020 draft season. He is a guy I could see being a low-end pick or UDFA that makes an impact once he lands on a team EX: Preston Williams.

SMU vs. Texas State I expect will be a bit of a blowout. SMU should head into Bobcat Stadium and come away with an easy win. This early afternoon game should provide a lot of offense for the Mustangs, and there are three players you should pay attention too.

Senior QB Shane Buechele continues to be an underrated devy asset. The former Texas quarterback came to SMU and quickly mastered the air raid offense SMU runs. Buechele shows excellent mobility in and out of the pocket. I enjoy watching his ability to throw from the pocket or on the run with accuracy, and does a great job with anticipation throws; this should be a game for him to show off.

Of course, having a good QB helps when you can pair him with a top receiving option, and WR Reggie Roberson is that guy. Senior WR, who is now the top option for the team. Roberson is an incredibly explosive athlete and has put up over 800 yards and six touchdowns in the past two seasons. His quickness off the line and ball tracking skills will get him noticed by NFL teams. Another big year could put him in the history books for SMU and move him higher in the NFL draft ranks.

Memphis gets a home game here, and it makes sense why this game is on prime time Saturday night. Memphis has a very promising team and should have a huge offensive output in this game. Unfortunately, for us, Kenneth Gainwell has opted out of the season, I believe we needed some more tape on him, but he should still be a top RB for the draft. That being said, Memphis still has some very intriguing options to tune in for Saturday night. I expect the Memphis offense to be on a roll Saturday night. Here are the players I’ll be tuning in to see.

Brady White, QB for Memphis, is one of my breakout candidates. White improved last year in a high powered offense under Mike Norvell. Norvell moved on in the off-season. Ryan Silverfield was promoted and already had familiarity with this team.

White makes very accurate throws in and out of the pocket, he does a good job hitting receivers in stride on the run, and his best throws usually come on slant routes or in the short and intermediate areas. White is a rhythm passer, and when he gets on a roll, he can really catch fire. A big year from White could see his draft stock increase, and starting the season off with a big win will be a step in the right direction.

Brady White is helped out by an absolute stud, WR Damonte Coxie. Coxie, a redshirt senior who has great hands and is a contested-catch machine. He consistently uses his length to his strength, and it helps dominate defenders. He is a real red zone threat and tracks the ball well. I like the pairing between him and White this year. With Gainwell opting out, I think the offense will lean heavily on White and Coxie.

Coxie has NFL draft upside. Excellent hands, and he rarely lets the ball get into his body. He has produced for multiple seasons in college, but his thin frame and age might be something scouts worry about. A big season again this year should shoot him up into the middle rounds of the NFL draft.

BYU vs. Navy will be the Monday night game, and I can’t wait. Navy always plays well and has a fun offense to watch. BYU is a team I’m excited to watch this year for one player. I expect this to be a good offensive game and a great game to kick off the week of football.

QB Zach Wilson is one of my favorite underrated quarterbacks. He came in and finished up the 2018 season as a true freshman. He’s put up good stats the past two years and is coming into his own in his junior season. He has a few weaknesses in his game, but I think if he plays for two more years, he can iron those out.

Wilson has the athleticism to create yards with his legs. However, I like that when he gets out of the pocket more often than not, he keeps his eyes downfield, looking for an open WR. I’m excited to see if he can continue to grow his game, and this game against Navy will be fun to watch.

Those are the games and players I’m looking forward to watching this weekend. College football is back, and I will continue releasing this article all season, breaking down five to ten of the best matchups every week. Make sure to keep checking out our devy content. If you’d like to see more of my content, you can follow me on twitter @SportsfanaticMB or check out my podcast, the Fantasy Football Roundtable.