The 2019 college season is well underway. @DavidZach16 takes a look at the running back class. 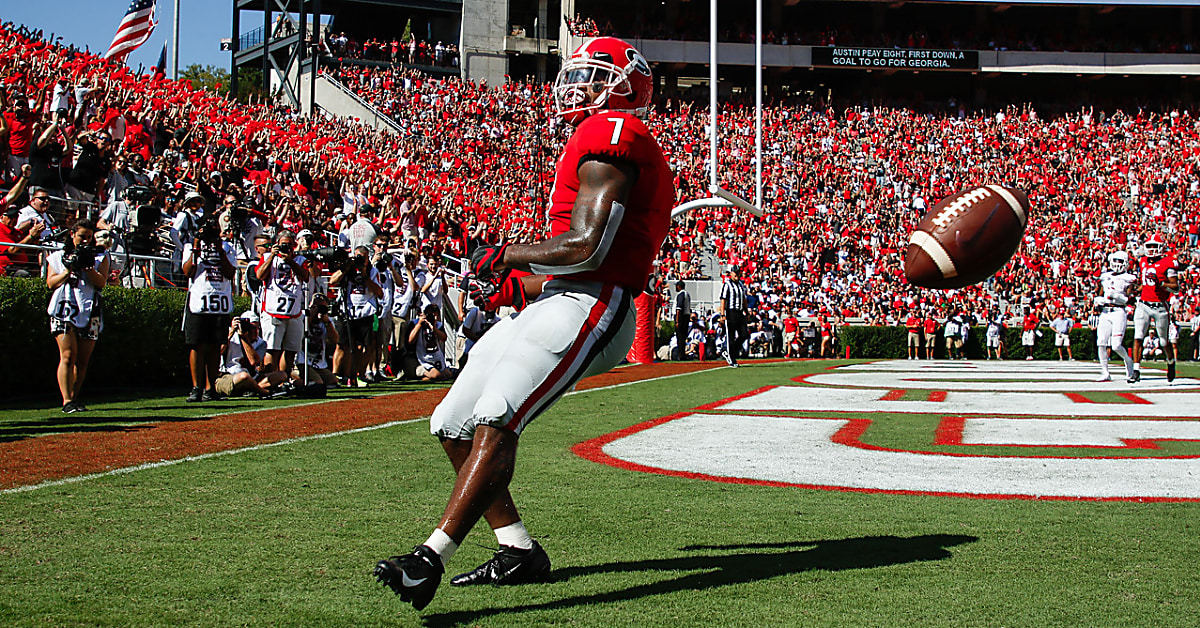 With the start of the football season underway, prospects planning to enter the 2020 NFL draft embark on the most important year of their career. This season’s performance will likely hold the most stock going into draft night, and from a devy fantasy perspective, this is less than ideal. However, if we look closer, there are already some very strong trends in place that can foreshadow their future success in the NFL.

Two of the most important traits that we don’t know for certain are draft capital and NFL team landing spot. These have some of the highest correlations to success, but yet they only tell half the story. We can learn a lot about other tendencies that have translated to high performance in the NFL, of which, are the following:

These are correlations we can use to weigh into seeing who the best prospects are prior to this final season. Successful RBs score well in most categories above and we can use it to project a baseline. Know that this final season also needs to be factored in as soon as statistics start to develop with games being completed.

Let’s first take a look at recent college RBs that have passed these tests before, providing ourselves a sense of assurance in the process. The MS of rushing and receiving yard charts below are made using Peter Howard’s database from the website zenoismy.name. It includes RBs drafted since 2016 that were either drafted high and/or have scored a respectable fantasy PPG in their first few years in the NFL:

I don’t expect you to sift through the above charts because I’ve done that for you. We notice the exact trends talked about earlier. Higher fantasy performers typically have multiple years of college production above the baseline regression, with TDs holding the least weight. Going further, the most productive of these also did so at an earlier age and perhaps more importantly, had a healthy MS of the receiving yards. Alvin Kamara appears to be one of the biggest outliers, but if we look at his Yards Created metric from Graham Barfield, he scored very high at 5.82 yards created per carry which is right next to Saquon Barkley (6.04), Christian McCaffrey (5.69), and Ezekiel Elliot (5.98), and far above the average of 4.74. Keep an eye out for his posting of the 2020 RB class.

Now moving onto the potential class of 2018. The same charts for success that we have plotted previously will be shown again here:

First of all, this is a strong RB class. But what carries the most significance? First, we notice only three RBs have hit above the baseline for MS in receiving yards (Swift, Benjamin, and Moss) which is considerably important. Dobbins and Akers were right around average with the rest being fairly low.

Second, having above 45% MS in rushing yards by age 19 was a great indicator of high success. The players who hit here were Taylor, Benjamin, Moss, and Akers. N. Harris has been particularly low but that number should greatly increase this year with both Damien Harris and Josh Jacobs now gone.

Comparing these values thus far in their college careers, we end up with a few tiers that we can categorize our prospects into. At the end of each player profile, I’ll note an item or two that would be the greatest increase to their NFL value. Let’s get started:

Taylor has the strongest profile of MS rushing yards, hitting over 55% at both ages 18 and 19! Thus far, he is leading the pack with his share of team rushing and early age output. This kind of high production at such a young age is very good for his future NFL promise and his 6.9 YPA career average is also attractive. If he establishes himself as a pivotal role in the receiving game, he will have a lot of the makings for a top RB prospect.

What to watch for in 2019: Drastically increasing his role as a receiver

Highly regarded as the top RB prospect of the class, Swift has made a strong receiving presence which is a fantastic statistic to hold on to and maintain going forward. He has been very efficient with his touches and he’s had a strong start to 2019, but it would be nice to see his receiving role bounce back to his career average at the least.

What to watch for in 2019: Dominating backfield touches, hitting above 50% MS of rush yards

Looking solely at Benjamin’s age 19 season, he checkmarks nearly every box you look for. High volume, massive MS rushing, and above-average MS receiving are all there. If he continues to hog the amount of work he has in all aspects of the game, he has a high ceiling. One small concern is that he has a slightly lighter weight. It would be nice to see him maintain his production with a few added pounds this year.

What to watch for in 2019: Continued or improved dominance of team backfield touches

His production continues to trend upwards, and his touchdown share is phenomenal. The one thing he continues to lack is involvement in the passing game. However, in two games thus far he has seen 55 receiving yards which is already closing in on his season total of 78 yards from a year ago. Everything is trending right for Etienne.

What to watch for in 2019: Drastically increasing his role as a receiver, continued efficiency

Currently holding a nice all-around profile, Akers has held a very strong rushing share while hitting just about average for receiving share. Similar to Taylor, these strong shares came early and often in his 18 and 19-year-old seasons. He’ll be looking to bounce back after a slightly inefficient year.

What to watch for in 2019: Improving his efficiency per touch, garner more overall touches

Dobbins has a very similar story to the aforementioned Akers, complete with a nice rushing share in back to back early years to pair with baseline receiving shares. With Mike Weber now gone, will he take hold of the backfield?

What to watch for in 2019: Improving his efficiency per touch, increase market shares

Productive but getting older

After a great sophomore season, Moss missed a few games his junior year. His market share of production at age 19 was gleaming but regressed a bit last year. His efficiency has continued to improve each year, and if he can return to market shares of years past, especially in the receiving department, he could climb boards.

What to watch for in 2019: Garner more touches, involved in receiving game, keep improving

Entering his age 22 season in college is not a great sign, albeit he has been slightly above average in most categories when he has played. Barring a miraculous season, his age is starting to become a prohibitory reason to stay away.

What to watch for in 2019: Will need a VERY good season to make up for age

He will need to improve his efficiency as it appears he keeps declining each season that goes on from that perspective. Maybe he can bounce back this year? Still, an intriguing prospect based on past production and is someone to monitor closely.

What to watch for in 2019: Improving efficiency per touch and a drastic increase in receiving game

Buried on the depth chart from year’s past, make or break year

The Alabama back was in a timeshare with both Josh Jacobs and Damien Harris last year, both of which ended up being first-round and third-round picks respectively. Earning a role in a backfield like that says something the numbers won’t show. That being said, he will need to show that he can handle a major increase in production in one of the best programs in college football. He is going to be one of the most interesting prospects to track this year.

What to watch for in 2019: Massive leap in production with Jacobs and Damien Harris now gone

While the information above can provide a good base when looking into your devy RBs, keep in mind how important this final season is for their projected NFL worth. Peter Howard’s database is free to access and a great tool to use. You can find him and his database on twitter: @pahowdy. Also, keep an eye out for Graham Barfield’s Yards Created metric once he posts them. It has the strongest correlation to Running Back NFL success and outperforms college production, draft capital, combine results, everything. Don’t believe me? Check out my tweet here if you didn’t earlier:

After sifting through and getting all his YaCr (YardsCreated) data, I compared it against draft capital, combine metrics, SpSc, college stats, and FPPG… and it won! 🤯 (1/2)

Thanks for reading! You can find me @DavidZach16 on twitter.

Weekly Watch: Dynasty Prospect Spotlight | Week 2
Out of the Pan and Into the Freiermuth: Penn State TE Pat Freiermuth