@Glosser13 breaks down the early impact freshman just a few weeks into the college football season. 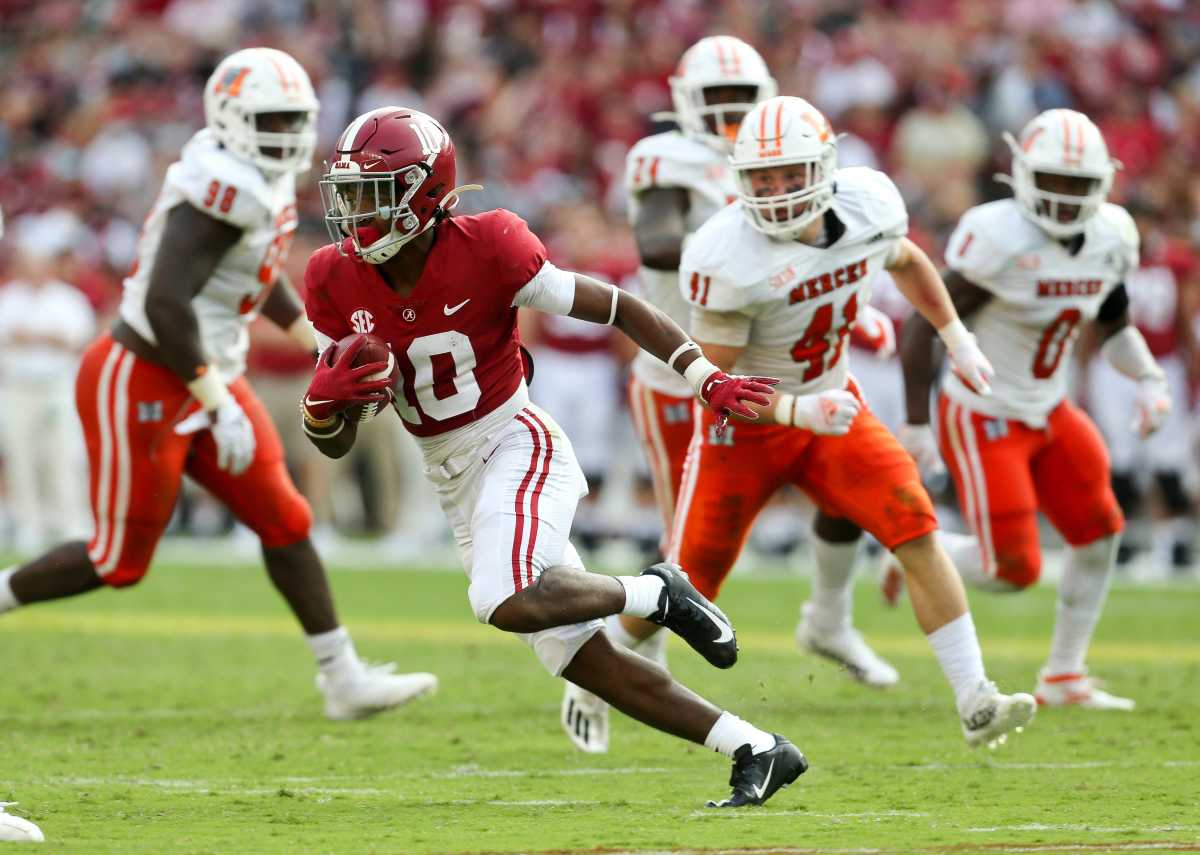 It’s such a beautiful time of the year with college stadiums packed once again with fans while we watch the future stars of the NFL showcase their skills. Although we are only two weeks in, it does seem like this time of the year goes way too quickly. Perhaps it’s just the long off-season that makes us miss it so much. As a seasoned dynasty manager, I’m sure by now you are aware of the top draft-eligible prospects whose names have been mentioned in mock drafts and draft profiles for the better part of the last two years. It’s never too early to get familiar with the future stars of college football and potentially future NFL draft picks. Let’s look at some breakout freshmen who have already started making some plays for their respective schools.

Jo Jo Earle is a four-star recruit from Aledo, Texas, with quick feet and a natural ability to catch the football. He wasn’t the highest recruited WR from this stacked Alabama class, but he seems to be getting the first chance to prove himself. Earle appears to be the next man up in the Alabama WR room to fill Jaylen Waddle’s role. Earle, like Waddle, does very well with yards after catch (YAC). Through two weeks, the freshman WR ranks second on the team in receptions, third in receiving yards, and caught all seven of his targets last week to lead the team in receptions and receiving yards (85) against Mercer.

It shouldn’t be long before Earle is the starting slot WR and forces Slade Bolden to the bench. It’s a very good sign for those who have invested in Earle in their Devy leagues that he’s already producing with Bryce Young and has been effective as a returner; his 22.5 yards per punt return ranks #1 in the SEC and #5 in the NCAA. The future is always bright for the Alabama offense, but especially at the WR position. We will likely be looking at multiple future first-round picks once this entire class starts getting consistent playing time.

In week two, Brock Bowers put on a show, hauling in three passes for 107 yards and two touchdowns while posting a ridiculous 35.7 yards per catch. The true freshman TE has landed in a perfect situation and should be a highly productive player for the Bulldogs offense this season. Receiver George Pickens will likely miss all season, and highly touted TE turned WR prospect Arik Gilbert is AWOL. Georgia is also down TE Darnell Washington, slated to miss his third straight game to start the season. There’s a good chance, with another solid performance, that Brock Bowers will be keeping that starting job. If you want a deeper look into the Georgia TE, you can read my article on the 2021 Devy TE class here.

The Ohio State Buckeyes look to have another talented RB in Tre Henderson. The freshman is splitting time through the first two weeks, but he has looked explosive with his limited touches. The #1 ranked RB in the 2021 class has been as good as advertised in just two games. Henderson has totaled three touchdowns with 69 rushing yards and 82 receiving yards.

It shouldn’t take many more games for the Ohio State offensive coaching staff to realize Henderson is their most explosive back and reward him with most of the backfield touches. In week two, the Buckeyes gave Henderson 12 runs in the opening game after calling just two runs for him. Devy dynasty managers with Henderson on their teams have to be very happy with what they’ve seen so far.

Mario Williams was the #4 ranked WR in the 2021 class and was named to the ESPN 2021 All-Freshman honors. Williams has benefited from the injury to WR Theo Wease, who is projected to miss half of the season. Williams has exceeded expectations already, and he leads the Big 12 conference in receiving touchdowns and ranks #2 in receptions (10). Ten receptions and two touchdowns in his first eight quarters of the season is a welcoming sign for current and future dynasty managers.

Will Shipley will be a weapon for the Clemson Tigers offense this season despite a poor showing in week one against an outstanding Georgia defense. Shipley bounced back strong with eight carries for 80 yards and two touchdowns against South Carolina State. The #4 ranked RB in the 2021 class has also contributed in the return game averaging 21.7 yards per return; 8th in the ACC.

He’s another highly drafted player in Campus 2 Canton college drafts this off-season who has produced early in his career. Shipley has scored 22.2 PPR fantasy points through two games for an average of 11.1 points per game, which should be his floor. Some big-time games are coming for Shipley very soon. It’s still early in his career, but Shipley looks like a player we will be talking about heavily when he’s closer to being draft eligible.

One of the most electric players in college football this early season is Florida’s Anthony Richardson. He has accounted for 467 total yards, that ranks tenth in SEC. Florida is rotating between Emory Jones and Richardson, but with a huge game against #1 Alabama in the Swamp this weekend, we should expect to see more of Richardson. He is averaging 25 yards per play while also posting a 54.5 completion percentage with two passing touchdowns. While Jones has seen a higher volume of attempts and has a 60+ completion percentage, he also has four interceptions through two games.

College football fans and dynasty managers alike would love nothing more than for the talented redshirt freshman to take the reigns as starting QB. The upside of a player with Richardson’s ability paired with a Dan Mullen system could be exceptional. The two QB rotation isn’t going away anytime soon, but I believe it will be to keep Anthony Richardson on the field if it does. This decision will excite both fantasy managers and Florida Gators fans.

Micah Bernard enrolled as a 17-year-old freshman in the class of 2019. He would redshirt his first game and see limited action in 2020. Due to the shortened season, he keeps his years of eligibility and remains an RS freshman. This year, Bernard has started both games for the Utes, and he leads the team in carries, rushing yards, and receptions. The best game of his early career came against BYU. He set career highs in carries (12), rushing yards (146), and YPC (12.2). The future is bright for the Utah RB as he looks to become a reliable fantasy performer. He ranks third in the Pac-12 in yards from scrimmage (240) and fourth in rushing yards (181).

Watching the Auburn freshman RB through the first two games, you wouldn’t believe he was a three-star recruit after being named Mr. Football in the state of Mississippi as a senior. Hunter broke the Mississippi high school touchdown record (92) while averaging 210.9 yards per game during his senior season. Hunter gained the respect and praise of his teammates by squatting 600lbs reportedly with ease during the off-season.

Tank Bigsby is the Devy darling in the Auburn backfield, but what Hunter has been able to accomplish through the first two games has been impressive. He’s averaged 15.1 YPC with back-to-back games of 110+ yards and a touchdown in each game. The Auburn backfield is becoming a huge strength of their offense, the Tigers will likely ride the hot hand, and right now, that is the freshman Hunter.

The Nebraska offense isn’t something to get excited about, especially when highly recruited TE Thomas Fidone went down with an injury before the season starting. Nebraska has done damage on the ground with ten rushing touchdowns to just four through the air. Gabe Ervin Jr. has been a bright spot in the Cornhusker’s backfield with 106 yards rushing. Ervin is tied for fifth in the Big Ten with two rushing touchdowns. Ervin is a three-star prospect from Georgia, ranked as the #43 RB in the 2021 class. It’s difficult to trust anyone on Nebraska’s offense for consistent fantasy production, but the freshman is turning heads in the first month of the season and a name to watch.

Memphis has been churning out productive RBs year after year, and It looks like they’ve got another one in freshman Brandon Thomas. Thomas has rushed for 338 yards and three touchdowns and is averaging 9.9 yards per carry. The Memphis RB ranks top five in the American Conference in rushing attempts, rushing yards, rushing touchdowns, yards from scrimmage, and plays from scrimmage. Thomas was barely a top 100 RB in the 2020 class and a three-star recruit. He has exceeded expectations as the Memphis Tigers’ best RB early in the season. Time will tell if he’s the next Memphis running back to see his name called during the NFL Draft.

I appreciate you taking the time to check out my thought on some of the early season breakout freshmen. As you become more experienced in playing in Devy fantasy football leagues, you will realize the importance of knowing the potential breakout freshman before everyone else. You want every advantage you can get in fantasy football and Devy and Campus 2 Canton leagues are no exception.

Take the time to check out my Devy rankings on the Dynasty GM tool as well as all the film room videos we have on dynastynerds.com for your viewing pleasure. Find me on Twitter @Glosser13.

College Football Week 2 – Too Cold or Too Bold?
More Than a Deep Threat: Jahan Dotson