As the Liberty Flames travel down to Oxford to face the Ole Miss Rebels, @TheHQNerd takes a look into the two of the top quarterbacks in the country, Malik Willis and Matt Corral. 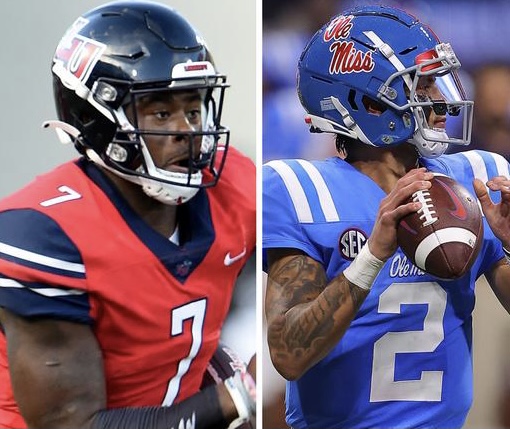 It’s not often we get a midseason game between a strong G5 and a good Power 5 program that really piques our interest. It’s even better when that matchup has two of the most highly touted quarterbacks in America.

The 7-2 Liberty Flames travel to Oxford to take on the 6-2 (16th ranked) Ole Miss Rebels. All eyes will be on the quarterbacks in this intriguing showdown as Malik Willis of Liberty squares off with Matt Corral of Ole Miss.

The two quarterbacks have risen up devy rankings throughout the season and are being mentioned as first-round NFL prospects. Let’s take a closer look at what all the hype is about.

Without further ado, let’s get to it NerdHerd!

Willis was a three-star athlete out of Roswell, Georgia. Lightly recruited out of High School, he Decommited from Virginia Tech and decided to commit to playing for the Auburn Tigers in 2017. Willis would spend two years at Auburn, where he was rarely used as a gadget-type player running the ball mostly at quarterback.

Willis transferred to Liberty in the 2018 offseason and was forced to sit out all of 2019. He took over the reins as quarterback for the Flames in 2020 and never looked back.

Willis has accounted for a whopping 64 total touchdowns in his two years at Liberty. He’s a dynamic dual-threat option with a cannon arm. Malik Willis possesses many tools to make it to the next level. Willis works best when things go off-script, forcing him to create on his own. He processes through reads reasonably well. Willis can throw boundary to boundary with easy arm strength and shows the ability to throw off-platform.

In his true freshman year, Corral appeared in four games for the Rebels, but for the most part, a backup until 2019 as a redshirt freshman where he would take over the signal calling duties.

Corral struggled at times early on his career with consistency, but has always flashed big-time arm talent.

In 2020, as a redshirt sophomore, Corral started to make noise as a legitimate NFL talent. As a I mentioned before, he battled some inconsistencies mainly accuracy. Most notably, Corral took a lot of flack for a game against Arkansas, throwing six interceptions. He also had a game versus LSU later in the year where he threw five.

What doesn’t kill you makes you stronger. Corral has a bulldog mentality and has persevered through hard times to become a Heisman Trophy favorite. He’s totaled 25 touchdowns to only two interceptions in eight games played. A Konami code, Corral has surpassed his career-high in rushing from last year in two fewer games.

Like Willis, Corral is drawing interest as a first-round NFL prospect. He’s a rhythm-based quarterback with a quick release. Corral has improved on his accuracy in 2021. Blessed with a rocket arm and the ability to be a threat as a runner, Matt Corral is also a leader for the Rebels. I have some questions about Corral’s size ( listed at 6’2 205 ), but for the most part,t NFL executives will drool over his talents come April.

All eyes will be down in Oxford on Saturday to see these two electric quarterbacks clash. Corral has been battling an ankle injury that was re-aggravated last Saturday against Auburn. Fingers crossed, he’s good to go for Saturday.

An intriguing storyline will be how Willis handles the step up in competition versus an SEC opponent. A knock some have mentioned is the level of competition he has faced. Playing at a smaller FBS school isn’t a major concern for me if you have watched Malik Willis play. If he shows out on Saturday the bandwagon will only get bigger.

These two star QBs project as legitimate first-round prospects. The rushing upside the two exhibit provides a high-end fantasy ceiling for both Willis and Corral. If they both indeed command first-round NFL draft capital, they should translate into dynasty SuperFlex first-round picks as well.

Get your popcorn ready. The Devy community is eagerly awaiting Saturday.

Did you hear the big news? The Dynasty Nerds YouTube channel is up and running. Now you can see the podcast straight from the NerdHQ!! Smash that subscribe button. Sign up for the DynastyGM tool to keep that edge over your league mates. Manage all of your dynasty teams, use the trade calculator, and we just added a player shares tool so you can see all players you roster in one place. Try it here for free.