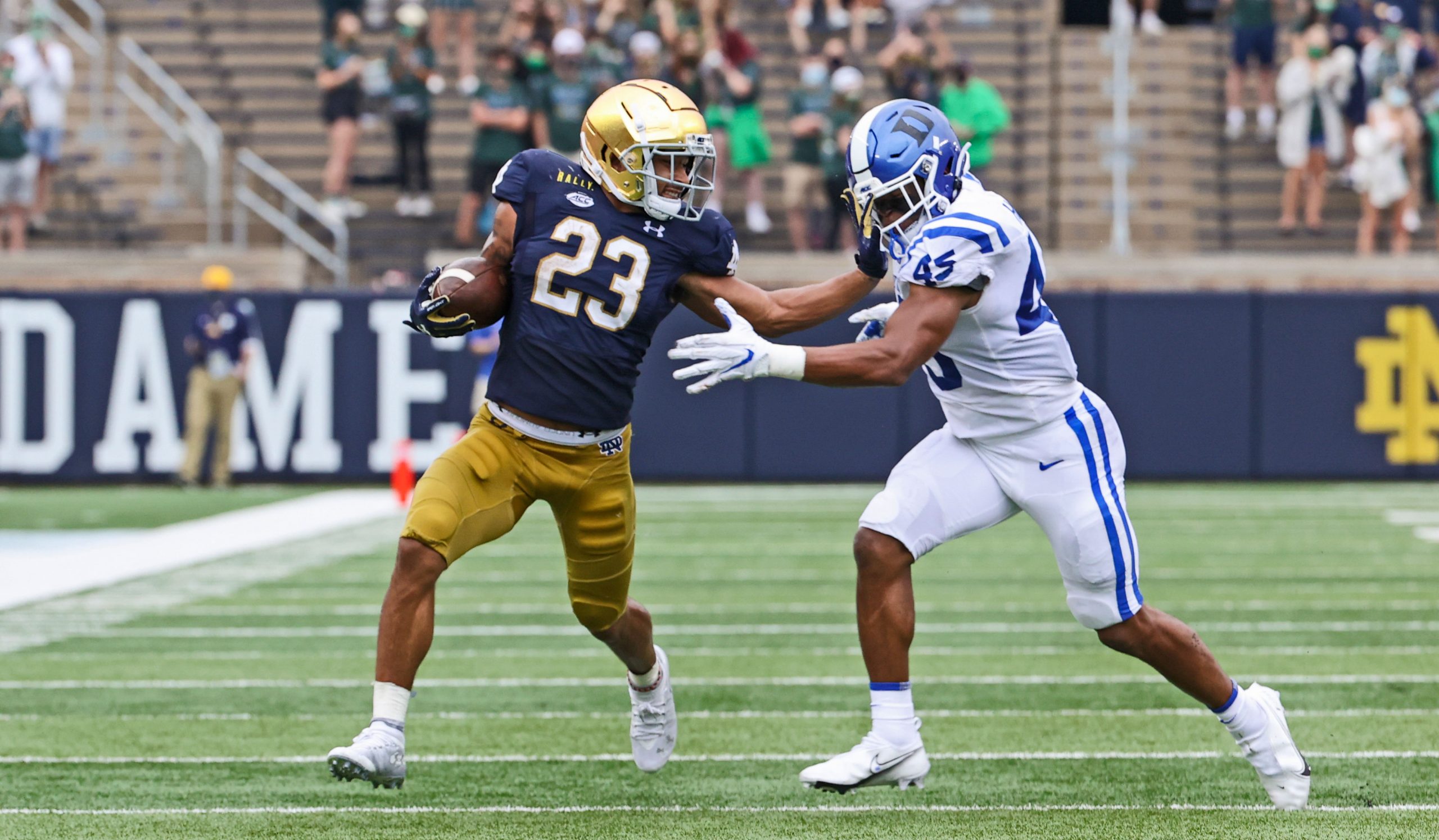 For this article, every week, I will look at players who have changed their devy and draft stock value, both good and bad, based on their play. This article’s goal will keep you updated on how the top players in college football are performing and bringing in and showing players off the radar. Value’s for devy, and draft-eligible players can take massive dives and balloon upwards after just one week of great or bad play. Continue to watch for this article as my goal is to try and give you any kind of advantage over your league-mates every week.

Entering his junior season, Harris had secured the starting running back spot for Miami (FL) but wasn’t someone many watched. (Outside of our very own Derek Bosworth, follow him at @dynasty_god on twitter.) While Miami did play UAB on Thursday, which isn’t a top defensive program. Harris looked good. He showed a little bit in the passing game. Where he was most impressive was his downfield running. His physicality to take on defenders and keep moving was impressive. Harris showed a little bit more elusiveness than I expected as well. They have a huge game this weekend against Louisville that should be another good test for him.

Kyren Williams was believed to be the backup to freshman Chris Tyree during the off-season. Williams came out in his first game and likely will not be giving up the job anytime soon. While it was just one game, he looked explosive and was running circles around a Duke defense that ranked 32nd out of 130 college teams on defense last year. Williams showed great burst Saturday in the run game. He was also extremely productive in the receiving game, going 2 for 93 yards. However, he didn’t look overall comfortable in the passing game. He is someone to watch the rest of the season, and could move his name toward the top of a weak 2022 running back draft class.

Clark stepped up and became the starter for Memphis when former starter Kenneth Gainwell opt-ed out of the season and declared for the NFL draft. Memphis had a powerful running game last year and looked to pick up right where they left off this year. Clark showed good burst and was impressive against a weaker opponent. His play-style is definitely different than Gainwell, as Clark is more of a physical and power runner. Clark looked good in week one, and if he can continue to produce, he’ll continue to trend upwards.

McGowan, a true freshman, may not have seen the field much this year had Kennedy Brooks, not opted-out. He got his shot and made the most of his Oklahoma debut. McGowan showed well, rushing the ball with great vision and burst. He showed little hesitation hitting holes and taking on defenders. McGowan was a real bright spot for Oklahoma, will be interesting to see how his stock moves throughout the season.

Chase Brice was a player I was looking forward to watching this weekend. Former Clemson quarterback moved on due to the arrival of Trevor Lawrence. Brice looked good in his debut with Duke. He threw some great balls on Saturday with good zip and accuracy. Brice is a guy who could vault up into the conversation after the top three quarterbacks, especially if he can continue to play like he did Saturday.

Spencer Rattler’s starting debut was one it feels like we’ve been waiting forever for. His hype and game didn’t disappoint as in his first game, he threw for an easy four touchdowns. While his opponent was great, the throws and plays he made were. Rattler will have tougher opponents down the road, but he stock rose after that performance easily.

Micale Cunningham was one of the most impressive performances I watched in week two. He passed for a career-high 343 yards, helping lead Louisville to a win. While his stats are a bit misleading in the fact that his wide receivers were able to help build his stats with YAC. Cunningham still looked good, both passing in this game. He’s an intriguing player who has eyes on him this season.

Sam James looked extremely good in his limited time on the field Saturday. James showed good burst and made some nice catches. James is a player whom I don’t think many are talking about that could boost his stock this year. As of now, he’s trending upwards and looked very good for West Virginia.

The entire UNC offense looked out of sync and bad in their game Saturday. Howell made some bad passes and didn’t look comfortable in the pocket. Both Newsome and Brown had dropped passes and didn’t look as crisp on their routes. That all being said, I don’t want to overreact to one bad week as they didn’t get a usual preseason. Plus, they did seem to turn it around in the second half. For now, the entire UNC offense is a hold for me, let’s watch and see what they do in the coming weeks.

Terry is a phenomenal talent and one of the fastest players in college. He did not have a great game Saturday. While he made some really good plays, he also had some inexcusable drops. Those drops are what have me holding his stock right now. It was only one game, but he ranks currently as wide receiver 161 with a drop rate of 53.4%; this needs to improve dramatically. I don’t want to overreact with it being one game, but another bad game and Terry will start trending down.

Walker had one of the more disappointing games of the weekend. He was going up against a very tough defense in Clemson, who came in ranked 13th against the run last season. Many wanted to see him against Clemson because it was a match-up against top tier talent. However, we only saw Walker get six carries with no real explanation of why. I preach not to overreact to one game, but this is very concerning. Walker can improve his stock, but this was not a great way to start his season.

Brock Purdy might have turned in the worst performance of the weekend. I, for one, was excited to watch his start. Purdy was and probably still is in the conversation for one of the top quarterbacks of the 2021 class. However, his performance raised more questions than gave us answers.

Purdy still has a full season to start moving his stock upwards, but with quarterbacks below him raising their games, Purdy might see his stock take a hit it won’t recover from if he has another bad game.

Hawkins is an extremely explosive player and still looked good on Saturday. He did struggle some against a Western Kentucky team that did rank 55th against the run in 2019. While Hawkins didn’t have a bad game, he landed on my stock down list due to prospects at the next level. Hawkins showed some in this game, playing against bigger opponents, he can struggle. I like Hawkins but think his upside is limited, so his stock takes a bit of a hit for me.

This concludes my devy stock watch for weeks one and two of the college football season. Continue to check back every week as we will continue to watch the stock trends of devy players moving throughout the year. You can follow me on twitter @sportsfanaticmb for all my devy content. You can also check me out on my podcast The Fantasy Football Roundtable.