The @DynastyNerds team is back for 1QB Rookie Mock Draft 2.0. Dive in to see where your favorite prospect went. 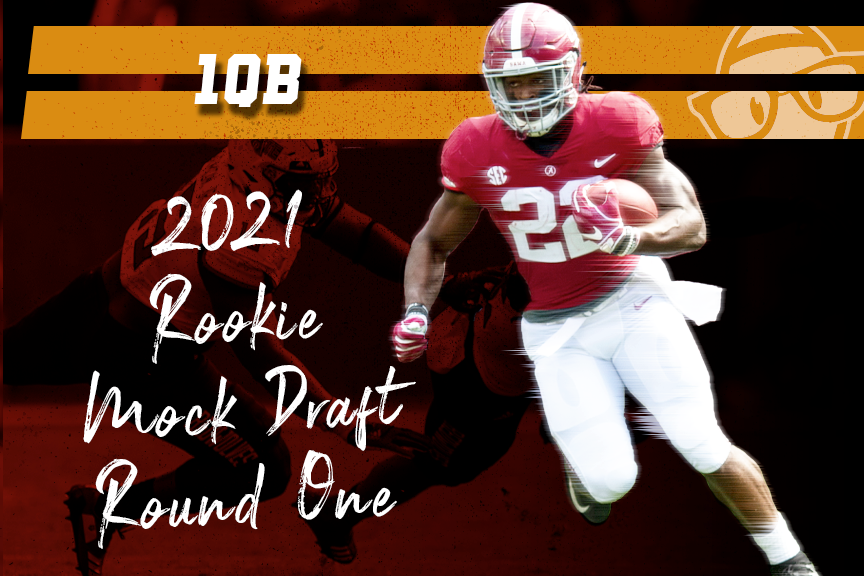 We are just two weeks away from Bowl season, a.k.a. the College football postseason. At this point in your dynasty league, you’ve either made the playoffs or are getting ready for your rookie draft. Our devy team decided to help give you an idea of just how deep this draft class is. Today we will do round one of a two-round standard rookie draft mock. Here are our picks for rounds one and two, and I’ll post at the bottom a chart showing how this has changed from our last mock.

Taking the top running back in a 1QB league is a no brainer to me. Harris is a perfect three-down back and does everything at a high level. He has the contact balance, catching ability, and power to be a monster at the next level.

I decided to pick number two in the standard format, and I had the same outcome by drafting Trevor, which was a surprise to a few involved.
A lot of my mindset would be to what I have at the quarterback position before making this pick, but unless I have Mahomes, Murray, or Wilson, Lawrence will be my guy at 1.01. If he falls to 1.02, I’m taking him, etc., etc. In turn, I can use my current quarterback assets to make a move and improve another position. Between his arm, pocket presence, and legs, Lawrence will get the points needed to help me from week to week.

Javonte Williams over Travis Etienne may seem controversial to some. However, he sits as my second-ranked running back in the 2021 class. Playing in committee backfield, he still leads College running backs in explosive plays (runs over 10+ yards) with 63. He is currently sitting with the most avoided tackles in college as well, with 63. Javonte is a good pass blocking back and very productive in the receiving game as well. Splitting time with Michael Carter has lowered both of their values, but I believe in Javonte’s ability to be a workhorse at the next level.

A true three-down back who has improved his game each season, Etienne is a safe bet to be the first back off the board next spring. The senior is a plug-and-play starter who could immediately step in as the bell-cow back for any team in the league due to his well-rounded skill set. Regardless of where he lands, I expect Etienne to immediately take on a lead role for an NFL club next fall.

Taking the top prospect in the class at the fifth spot was too much to pass up. Chase plays with a nasty disposition and fights hard to catch every ball thrown his way. Dangerous after the catch, Chase is going to be a STUD receiver for many years.

Some people might be scared off by Waddle’s injury, but I still have him as the WR2 in this draft class. His electric speed should allow him to get open with consistency at the next level, but he’s not a one-trick pony. He’s a solid route runner who can run routes on all three levels of the field and has great hands as well. If he lands in the right spot, he could be a 1,000 yard WR in his first season.

I really wanted to talk about Pitts, so I drafted him ahead of many better fantasy assets. That’s not to say he won’t be an excellent NFL player, as Pitts has the potential to be a Pro Bowl tight end by his second season. It will be interesting to see how he is used by the team that drafts him, as we’ve seen top TE prospects struggle early on when asked to take on “traditional” roles in their offense, with the exception being Evan Engram in 2017.

Devonta Smith is now the record holder for most receiving touchdowns in SEC history, passing Amari Cooper. And much like Cooper, Smith is coming out as one of the top receivers and route-runners of this class. So far, he has done nothing but dominate the competition this year. When teammate Jaylen Waddle went down, Smith took on an even bigger workload. It’s been an incredible season for Smith, and you could say that he has had the biggest rise of any receiver in the class this season. He has shown off the ability to do just about everything, and the only knock on him is his weight, but with his frame, that could be very quickly (and easily) solved.

My WR1 at 1.09 in a standard draft!? Easiest pick I’ve ever made. I understand the hype for Jaylen Waddle and Devonta Smith, but I still lean Bateman. If you put Bateman on Alabama, I can only imagine Mac Jones connecting on deep balls to him. We won’t see Bateman again until he debuts in the NFL, and his lack of consistency at QB has dropped his stock, so I’m scooping up some later firsts to take advantage of it.

In my opinion, there are four high-end WRs in this draft class, and the other three have already been taken. I am excited to get Rondale Moore at 1.10. This is great value for an electric receiver that will be a reception magnet in the league.

Marshall isn’t going to hit the spot for some of the analytics people- he never exceeded 800 yards, will not have a true Breakout Age, etc. But playing with Justin Jefferson and Ja’Marr Chase will do that, and anyone that’s watched the LSU offense in 2020 will tell you that this young man was the bright spot. Tough, rangy, and equipped to win as an alpha wide receiver in the NFL, Marshall has WR1 upside for fantasy football.

I can’t really argue with getting Justin Fields in this spot. I know it isn’t SF, but I still like the talent he possesses. I would have taken any of the players above this pick over Fields.

This completes the first round of Mock Draft 2.0. Round two will be released later this week. We on the devy team will continue to do these every month leading up to our favorite time of the year, draft season. Be on the lookout for round two of our SuperFlex and standard mocks, which should be out later this week. Continue to check back for all of our devy and NFL draft content as we push closer to the off-season.