Our Devy team goes through a two round rookie mock. Here is round two of the 1QB mock 2.0 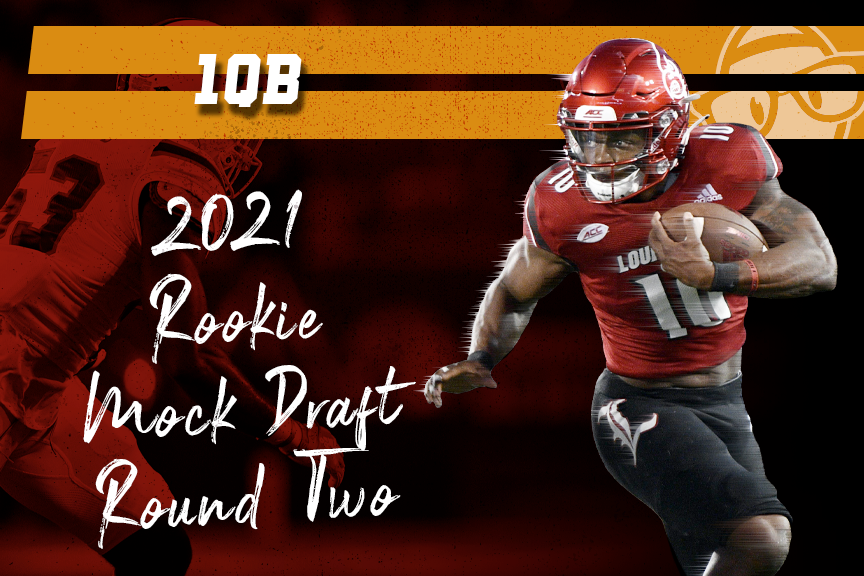 We are just two weeks away from Bowl season, a.k.a. the College football postseason. At this point in your dynasty league, you’ve either made the playoffs or are getting ready for your rookie draft. Our devy team decided to help give you an idea of just how deep this draft class is. Today we will do round two of a two-round 1QB rookie draft mock. Here I will recap our picks for round one, and you’ll see our picks for round two.

My TE2 in this class and a no brainer pick if you are playing in a 2TE or TE premium league. While Pitts is getting all the hype in college this year, Freiermuth is an elite pass-catching tight end who has the athleticism to be a mismatch nightmare for opposing linebackers and secondaries. Having a great TE in a league is invaluable, and Freiermuth can come into the league and immediately have Travis Kelce type potential.

No player has risen my draft board in the past few months more than Javian Hawkins. Hawkins currently sits as my RB3, which is a lot higher than the norm, but I am okay with it, even with questioning his size. I believe he should spend the next few months adding 5-10 pounds, and he should have no problems taking the next step on Sundays.

After taking Lawrence, my idea here was to draft Hawkins or stud wide receiver, but I went ahead and snagged Hawkins with the latter already gone. There is absolutely no chance if we went to a third-round, he would be there for me to snag. I wanted my guy and took him.

Jermar Jefferson is a running back who is not getting enough credit this season. He has the 18-year breakout age when he ran for 1,380 yards as a true freshman. He came into last season and got injured and ended up splitting time with Artavius Pierce. This year, Jefferson has been the main running back and, in just four games, has already rushed for over 600 yards. He’s currently averaging three explosive runs a game (these are runs over 10+ yards.) This is the third-best in the nation. Throughout his college career, Jefferson has shown that he is a willing and capable receiver out of the backfield as well. Jefferson is my running back four in this class, and the last NFL workhorse left, in my opinion.

Zamir White has been having a good season at Georgia. Coming off two ACL injuries, this was his final year to prove something. He likely comes out in a somewhat weaker running back class. White is an explosive athlete that runs with power. He is also sufficient out of the backfield as a route runner and receiver.

Gainwell is forgotten about and could be the steal of the draft. I would love to see him add some weight while training and still keep his athleticism. He is a home run threat, smooth and powerful, and dangerous catching the ball as well.

At this point, it was between Hubbard and Brevin Jordan, but I decided to take the flier on Hubbard. He definitely did himself a disservice by returning to school this season and putting up subpar stats due to injury, but he showed electric rushing ability in 2019. Injuries have sapped a lot of that this season, but if he lands somewhere like Pittsburgh, I think he can definitely be a playmaker at the next level and has the speed and vision to have a solid NFL career.

Moore may be undersized, but his production this season speaks for itself. By far the best receiver in the SEC this season (yeah, I said it), Moore is positioned to be a team’s starting slot receiver as soon as he enters the league. If what we’ve seen from him this year is any indication, the Ole Miss star could be a handful at the pro level.

Jaret Patterson has the chance to go down as one of the most prolific running backs in college history from a statistical standpoint. He’s currently averaging 8.6 yards on 107 attempts and has 16 TDs through four games. In the past two games, he’s run for 710 yards. Yes, you read that correctly. He looks great on tape, but his competition is a step down from many other running backs in this class. He’s a good gamble in the second round right now, but by the end of summer, his outlook will lean heavily on his draft capital.

Lots of options here, and you have to love the depth in the ’21 class. Amon-Ra is one of my second round targets this year. Playing in the PAC12 continues to remove the spotlight that should be on him. He does a great job of separating and has the burst to break a play after the catch.

In a 1QB league, I will almost always load up on RBs in rookie drafts, rarely taking different positions. In the first round, I scooped up Rondale Moore because I did not expect him to fall to 1.10, so I knew I must take an RB here. CJ Verdell is currently my RB4 in the class, and I am happy to land him here. Although he will never be a workhorse in the league, I believe that he will be a major contributor to a committee early in his career due to his skillset. Verdell runs with power despite being undersized, explodes out of cuts, and is a pass-catching threat out of the backfield.

I thought hard about Seth Williams / Tylan Wallace here, the next WRs on my board. But a dominant TE is a massive advantage in fantasy football, and Brevin Jordan may be just that. Getting him a half-round after Freiermuth seems like cheating. Jordan is a hair short for an NFL TE, but he runs crisp routes and does heavy damage after the catch, running with surprising agility for a 250-lb monster.

This pick was either going to be Seth Williams or Tylan Wallace. I really like both players, and both, I think, are going under the radar. Williams’ stock has taken a bump up this season. He has great size for the NFL, and his hands don’t miss a beat. He seemingly catches almost anything thrown his way.

This completes the second round of Mock Draft 2.0. We on the devy team will continue to do these every month leading up to our favorite time of the year, draft season. Be on the lookout for round two of our SuperFlex mock, which will be out Friday. Continue to check back for all of our devy and NFL draft content as we push closer to the off-season.