When do the QB’s start going off the board? The Nerds break down round 2 of the 1QB rookie mock draft. 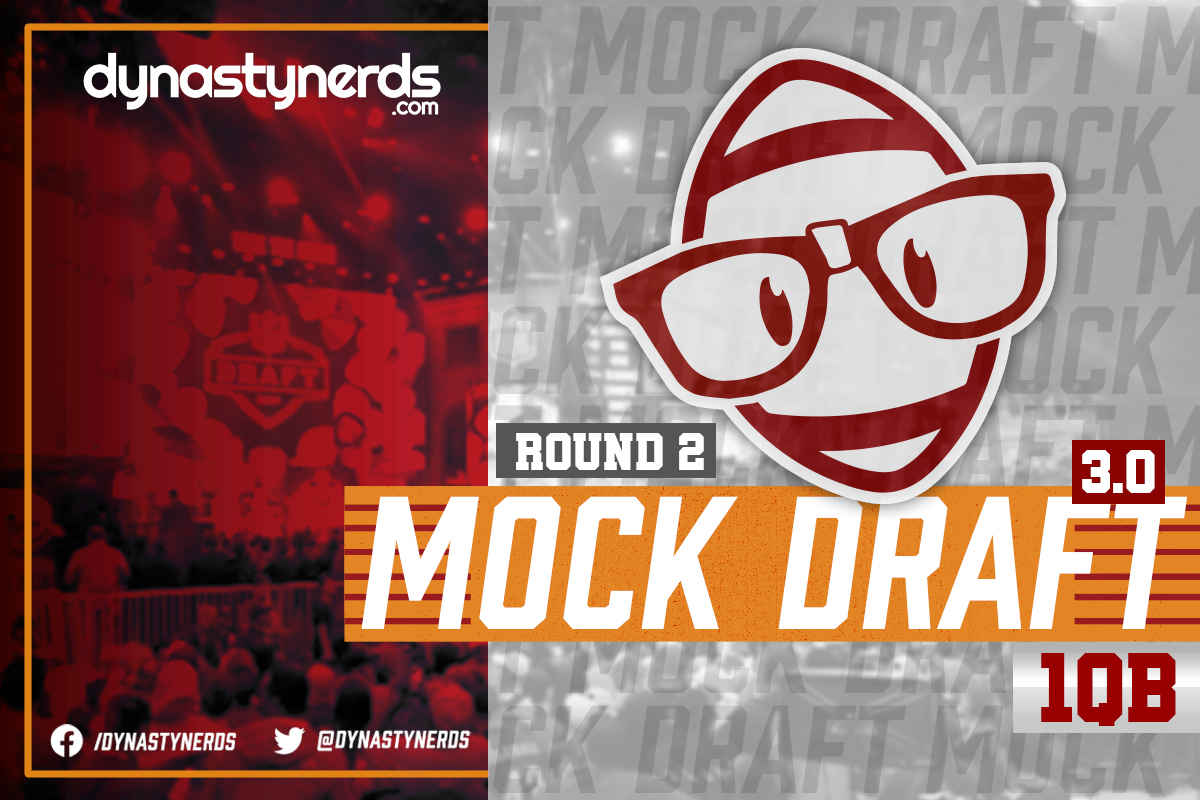 We have finished the college season with a bang. Alabama came out and beat up on Ohio State to lay claim to the National Championship. We are getting closer and closer to the off-season, so it’s time to get you ready for your rookie drafts. Our devy team decided to help give you an idea of just how deep this draft class is. Today we will do round two of a two-round 1QB rookie draft mock. Check out the bottom of the article to see how some player’s value may have changed since mock draft 2.0.

Marshall could be a sleeper and see a quick ascension in the NFL. I love the speed, size, and hands – he tracks deep passes well and has the strength to muscle out DBs and win contested catches.

I don’t mind landing the (expected) first overall pick with the 14th overall pick. Lawrence could be a QB1 for the next decade or two, making him an excellent value at this juncture.

I was hoping Lawrence would fall here, but I am happy with snagging Fields with this pick. I think whether he goes to the Jets/Falcons or somebody late down the draft boards, Fields will still be a top quarterback in the future. Fields didn’t look great against Northwestern in the Big 10 Championship game, but he did rebound with a great performance against Clemson. In the National Championship game, Fields didn’t look great, but he didn’t turn the ball over.

There are a LOT of very good wideouts in the 2021 class. Undoubtedly, many will go on to have varying levels of NFL and fantasy success. But there are a few that truly type as NFL alpha WRs, the kind that gives you consistent, top-notch fantasy production and stand out from the myriad of WR2s and WR3s that are easily acquirable through fantasy formats. Seth Williams is one of those guys. The 6’3″ 210+ lb. stud has racked up highlight reels against SEC defenses for three years, even with having the questionable Jarrett Stidham and Bo Nix managing to throw over William’s massive frame. He is undoubtedly one of my biggest flag plants of this offseason.

It’s Monday, January 11th, and you’re probably getting a taste of the talent that is Ohio State RB Trey Sermon right now in the national championship game. Well, Rhamondre Stevenson is the guy that stole Sermon’s job and made him transfer. Do you like Najee Harris? Stevenson offers much of what Najee does in terms of elusiveness, and he’s far more powerful. Do you like Derek Henry? Stevenson is 80% of Derrick Henry but with high-level receiving ability. I’ll take the pass-catching power back here while everyone else is going after Patterson and Gainwell in the second.

This running back class is fascinating. We don’t have the insane talent at the top that 2020 had, but there’s a deep, wide second tier of talent, and it’s going to get pushed way down the boards by the stud QBs and WRs. No one’s talking about him yet, but by fall, you’ll find Sermon at or near the top of that tier. The shortened season and a bit of a timeshare with Master Teague have kept Sermon off the radar for casuals outside of Ohio. Still, in the past few weeks, the senior has absolutely exploded, dominating two of the league’s best defenses to the tune of 589 yards and three touchdowns. Tough, elusive, and possessing great hands, Sermon is built in the mold of Kareem Hunt or David Montgomery.

If you are coming away with Kenneth Gainwell in the mid-second round of your rookie drafts, congratulations, you just got one of the steals of the draft. It seems people are quick to forget just how good he was in 2019 as a redshirt freshman since he opted out of the 2020 season. When initially watching Memphis tape from 2019, I was more impressed by Gainwell than Gibson, and we’ve now seen what Gibson can do at the next level. He’s the classic do it all Memphis RB that can line up at receiver and make plays and has the speed and physicality to break off long runs. My RB4 in this class.

Lance, in my opinion, the most intriguing QB in the 21 class. I think he’s the best “Konami code” as my co-host like to say QB in this class. Lance has the size, speed, athleticism, arm strength, and Moxy to be a starting QB in the NFL. What worries me is all of the stats he put up came as a redshirt freshman. In his Sophomore year 2020, he played one game and opted out to prepare for the NFL draft.

The jump from FCS to the NFL is a massive one. Even though Carson Wentz was able to do it, he came as a starter for four years at NDS. While Lance has the highest ceiling in this class, I also think he has the lowest floor. He could end up being a top dynasty QB asset, or not even a backup in the league. For me, it would be crucial he sits at least a season, possibly even two.

My TE2 in this class and a no brainer pick if you are playing in a 2TE or TE premium league. While Pitts is getting all the hype in college this year, Freiermuth is an elite pass-catching tight end who has the athleticism to be a mismatch nightmare for opposing linebackers and secondaries. Having a great TE in a league is invaluable, and Freiermuth can come into the league and immediately have Travis Kelce type potential.

The third TE in the top tier of this 2021 class is Miami’s Brevin Jordan. Jordan is a very dynamic, athletic tight end with unlimited potential in the NFL. Jordan improved his receptions, yards, and yards per catch every season with the Hurricanes. In just eight games in 2020, he scored seven touchdowns and lined up all over the field. In his final college game, Jordan posted an 8/96/2 stat-line to put NFL scouts on notice that he’s every bit as good as the other TEs in this class.

While he certainly has some flaws in his game, Terry has long demonstrated a commitment to his greatness and a commitment to football. Whether it be playing defensive end in high school when coaches asked, committing to the strength and conditioning program at FSU, or choosing to play injured through the 2020 season instead of opting out, Terry has consistently demonstrated he is willing to work to be great.

Dyami Brown is a name that many people are going to be familiar with. In a couple of years, I would be elated to get him this deep in a rookie draft. In 2019 he was one of only four players to catch 40 or more passes and average 20 or more yards per reception – the others were Ceedee Lamb, Rashod Bateman, and Ja’Marr Chase. This year, he was the only one. Provided he lands in the right spot, he has all the tools to succeed at the next level and is someone I would look to target in this range in rookie drafts this season.

This completes the second round of 1QB Mock Draft 3.0. We on the devy team will continue to do these every month leading up to our favorite time of the year, draft season. Continue to check back for all of our devy and NFL draft content as we push closer to the off-season.