Our Devy team give you the 1QB mock draft 3.0. Who’s moving up and down as we approach the off-season. 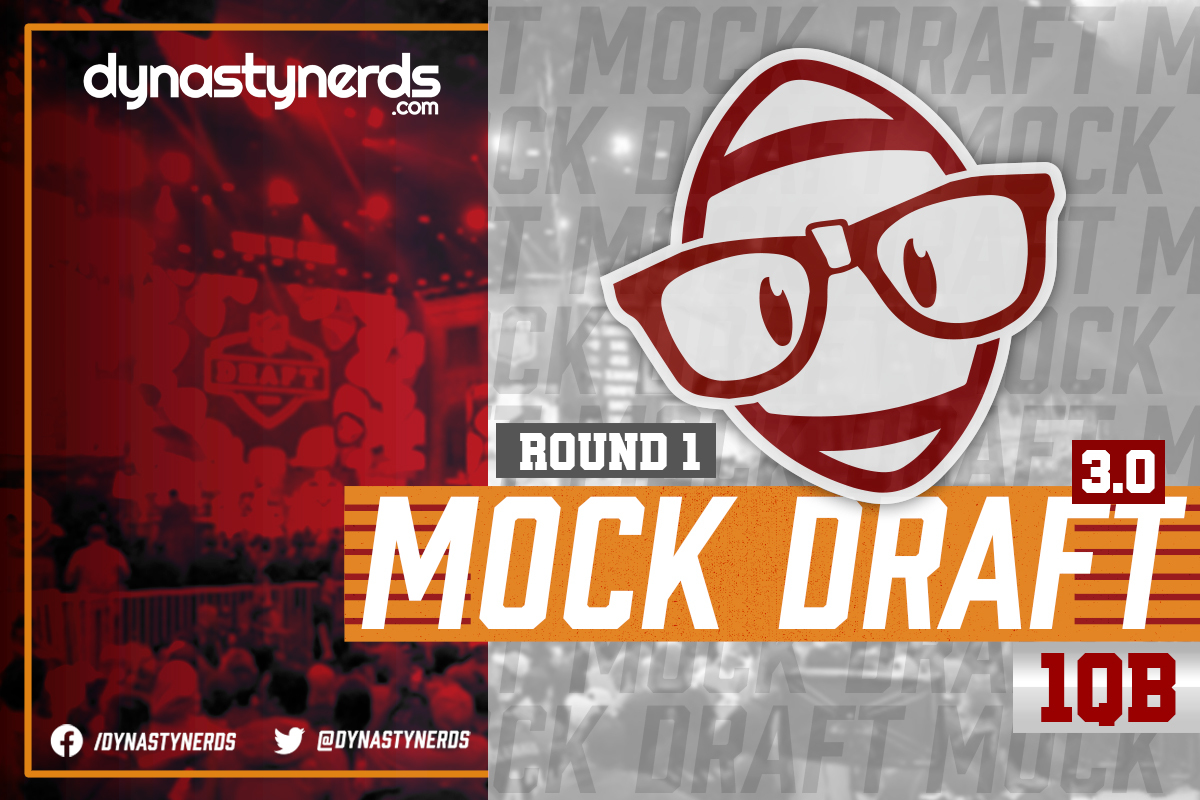 We have finished the college season with a bang. Alabama came out and beat up on Ohio State to lay claim to the National Championship. We are getting closer and closer to the off-season, so it’s time to get you ready for your rookie drafts. Our devy team decided to help give you an idea of just how deep this draft class is. Today we will do round one of a two-round 1QB rookie draft mock. Check out the bottom of the article to see how some player’s value may have changed since mock draft 2.0

Harris is going to hit the ground running and be an RB1 from day one. He’s big, powerful, agile, smooth catching the ball, can pass block – he does it all. Not the most explosive and older, but you get RB1 production for the next five years.

Williams may be the most explosive runner in this class and could be the first running back off the board this spring. He’s a nice consolation prize after missing out on Najee Harris.

I can’t argue with getting Travis Etienne with the third overall pick. While Najee Harris is my RB1, Etienne is my RB2, just ahead of Javonte Williams. However, you can’t really argue with any of these top three running backs. Etienne has great speed and can break away in a flash. He is capable of catching the ball, but mainly just off swing routes. He has the potential to be a top ten running back in the league.

If I told you that I was excited about a 19-year-old pass-catcher leading his team in receptions, you’d, of course, assume I’m talking about some stud WR with a great BOA. You’d be wrong. I would be talking about Kyle Pitts, the season BEFORE he became a Heisman-considered superstar. Some of you may be surprised to see him go before any of the phenomenal WRs of this class but don’t be. If you take one thing away about the 2021 class, it’s that the WR position is STACKED. There is only one Kyle Pitts.

Outside of Pitts, Chase is the most slam-dunk, bulletproof prospect in the class. He checks literally every box from both film and analytics. With early, dominant production, speed, physical play, and a killer highlight reel, Chase is the easiest pick in the ’21 draft. It doesn’t hurt that we’ve seen him outplay his ex-teammate Jefferson, who is himself the current dynasty WR1. Don’t overthink this one.

Winning the Heisman doesn’t make Smith the WR1 in this draft class… his ability to create separation, win 50/50 balls and create yards after the catch do. Smith has such a great all-around profile that the worries of his weight do not outweigh his upside. It’s pretty easy to add 10lbs to a man, but it’s much harder to teach him how to do all that Smith does.

Moore is second to just Ja’Marr Chase in my wide receiver ranks, so to get him at 1.07 in a standard draft is a great value. Rondale Moore is a dynamic playmaker with the potential to go the distance every time he touches the ball. Along with this, I believe that Moore can be a target hog at the next level due to his toughness and consistent ability to create separation. In fantasy football, we all love slot reception magnets due to their safe PPR floor. Rondale Moore will not only be this guy for your fantasy team but will have a higher ceiling because of his spectacular playmaking.

With running back being a bit weak after the top guys, I want to get the last RB I have in my top group. Jermar Jefferson is a running back who is not getting enough credit this season. He has the 18-year breakout age when he ran for 1,380 yards as a true freshman. He came into last season and got injured and ended up splitting time with Artavius Pierce. This year, Jefferson has been the primary running back and, in just four games, has already rushed for over 600 yards. He’s currently averaging three explosive runs a game (these are runs over 10+ yards.) This is the third-best in the nation. Throughout his college career, Jefferson has shown that he is a willing and capable receiver out of the backfield. Jefferson is my running back four in this class and the last NFL workhorse left, in my opinion.

I can’t underestimate the amount of talent in this draft class. Waddle at 1.09 is a steal! If you watched DeVonta Smith put on a show all year with Mac Jones, just imagine if Waddle had remained healthy. John Metchie III put up 47-835-6 (pending national championship game), and I believe that Waddle would have had over 1,000 yards for the first time in his career. Take advantage of the fact he didn’t and will fall in rookie drafts because of it.

One of the best values this early in mock drafts, Amon-Ra St. Brown, is an instant starter in the NFL. He brings great route running and excellent body control on contested catches, which is rare to see from such a young WR. In 2020, a shortened season where he only played six games, he was able to post a 41/478/7 stat line. Amon-Ra St. Brown could be one of the best values in rookie drafts if he falls to the early second round. There’s little doubt to me that he will be a starting NFL WR sonner than later.

Chuba Hubbard made a disastrous decision to return to school for his redshirt junior season. He had the chance to opt-out or even change schools after his coach was seen wearing clothing from a controversial ‘news program.’ Instead, he decided to go ahead with the season, ostensibly to help boost his draft stock and answer questions about his hands and pass protection. However, the former 2,000-yard rusher caught just eight passes and rushed for 625 yards in seven games.

For some perspective, Hubbard saw 328 carries, which he took for 2,094 yards in 2019, chipping in 23 receptions for 198 receiving yards. With junior runner Desmon Jackson seeing 100 carries, senior LD Brown seeing 87 carries, and sophomore QB Spencer Sanders seeing 101, there simply was not enough work to go around for the potential day two pick. Hubbard was a day two lock had he declared for the 2020 NFL Draft, but may now need a good combine to avoid slipping to day three. His 2019 tape speaks volumes, but when a player regresses to this level, his stock slips. Landing spot will be key, but I am drafting him here based on the notion that he will not be joining a backfield with a top-ten level runner ahead of him.

Getting Bateman at the end of the first round is highway robbery but speaks to the level of talent that this draft holds. Bateman didn’t play much in 2020 but had 60 catches for over 1200 yards and 11 TDs in 2019 despite the presence of 2020 draft pick Tyler Johnson. His high dominator percentage and early breakout age all speak to a high chance of success at the next level, and if he lands in the right spot, he could easily be this season’s Justin Jefferson.

This completes the first round of 1QB Mock Draft 3.0. Round two will be released soon. We on the devy team will continue to do these every month leading up to our favorite time of the year, draft season. Be on the lookout for round two of our Superflex and standard mocks, which should be out soon. Continue to check back for all of our devy and NFL draft content as we push closer to the off-season.