Our Devy team goes through a two round rookie mock. Here is round two of the Superflex mock. 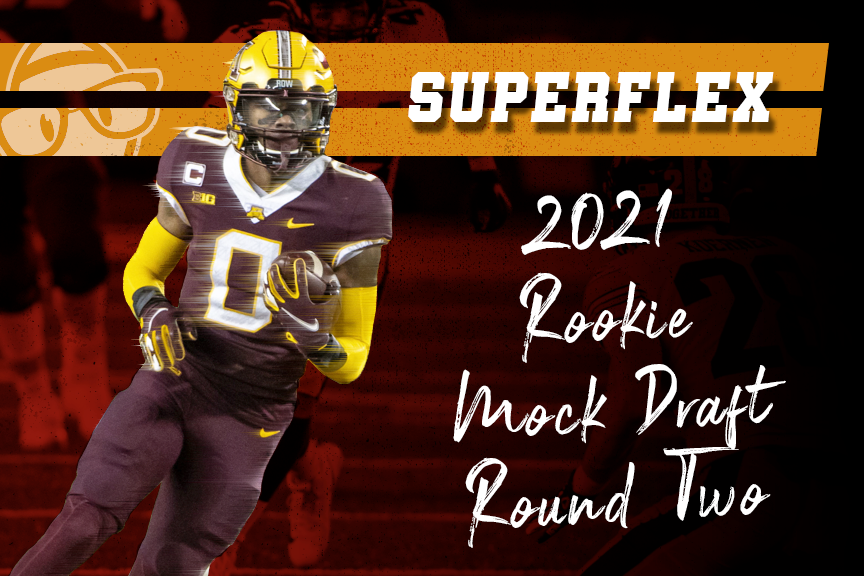 We are just two weeks away from Bowl season, a.k.a. the College football postseason. At this point in your dynasty league, you’ve either made the playoffs or are getting ready for your rookie draft. Our devy team decided to help give you an idea of just how deep this draft class is. Today we will do round two of a two-round SuperFlex rookie draft mock. Here I will recap our picks for round one, and you’ll see our picks for round two.

I wanted to follow up my first-round pick of Lawrence with a wide receiver, and Terrace Marshall falling to me was a delight. Marshall recently opted out for the remainder of the college football season and a smart decision as he has been one of the lone bright spots on the LSU team in 2020.

Marshall is a PLAYMAKER, and that’s why I want him on all my teams. He had ten touchdowns in seven games, and three of those came from 50+ yards, and what I loved even more was his five red-zone touchdowns. Marshall has played his way into the conversation of being one of the top tier WR in this upcoming draft, and for me, he is worth the price of admission.

Bateman could be a dominant WR1 at the next level or a good WR2 who never puts it all together. He is phenomenal after the catch, runs great routes, and does a lot well. Occasionally the ball gets in on him, and his blocking effort could use some work.

While Hawkins was not my favorite pick here, he still profiles as a home run hitting running back. He is a little undersized but has the big play potential to break off long runs and can be a usable back in the right system.

First off, I’m an idiot. I missed the fact that Rondale Moore was still on the board. He would easily be my selection and helps show how deep this class truly is. Getting Amon-Ra at 2.04 is a win for me, too; with no QB here worth grabbing, St. Brown was my selection, and I feel like he is currently undervalued (He’s the best of the St. Brown boys.)

Zamir White has been having a good season at Georgia. Coming off two ACL injuries, this was his final year to prove something. He likely comes out in a somewhat weaker running back class. White is an explosive athlete that runs with power. He is also sufficient out of the backfield as a route runner and receiver.

An absolute steal at 2.06, Moore is one of the top playmakers in the country when healthy. He’s a top-five wideout prospect in this class, and with the right offense, he could be a bonafide 1st round pick. He’s explosive in the return game, as well as in the air and on the ground. He’s a special and unique talent but will have to find a role in the NFL that can be sustainable. Either way, he’s incredible value here in the second round.

After going QB in round one, I was looking to go RB or WR in round two. CJ Verdell is currently my RB4, and with all of my tier 1 WRs off the board, this pick was obvious for me. CJ Verdell likely will never be a top ten dynasty RB because he will never be a workhorse. However, he is a very safe prospect due to his high-end ability to explode out of cuts. This, along with his aggressive running style and pass-catching ability, will allow him to carve out a role in a committee early on in his career. CJ Verdell has a future as a fantasy RB2, which makes him a good pick at 2.7 in a Superflex draft.

Once again, I am drafting a prospect who I don’t love due to positional value. Mond is a great athlete with a lot of experience as a starter for the Aggies. I could see a team talking themselves into him as a late-first or early second-round pick in this class.

Jefferson has rejuvenated his draft stock with three 100 yard games and one game over 200 to start the season and has looked like the back everyone thought he’d be after his 2018 freshman season. If he lands in the right spot, he could be one of the sleepers of this draft class and is capable of being a workhorse back in the NFL.

Seth Williams seems to be a love him or hate him prospect. A prototypical “X” wide receiver with natural hands and excellent body control. He will win most contested-catch situations and is a nightmare in the red zone to cover for defenses. If he can show up to the combine and show off some speed, Williams should be a day two pick.

There are questions about Gainwell, but I’m looking for upside at this point in the draft. In his one full season as the starter at Memphis, he put up a 231.1459/13 rushing line- and 51/610/3 through the air. He runs a full route tree, catches passes downfield, and, notably, relegated rookie breakout Antonio Gibson to a depth role. Either he’s at least as good as Gibson, or the Memphis coaching staff misevaluated their RB room badly.

Tylan Wallace was on his way to have another great year in 2019, but a torn ACL killed that, and in 2020 well, we know the story there. He isn’t afraid to get physical with any defender. Wallace will maintain his catch point and can work after the catch to get those extra yards. He can play outside or in the slot, making him quite versatile.

This completes the second round of Mock Draft 2.0. We on the devy team will continue to do these every month leading up to our favorite time of the year, draft season. Continue to check back for all of our devy and NFL draft content as we push closer to the off-season.