Our Devy team goes through a two round rookie mock. Here is round one of mock 2.0 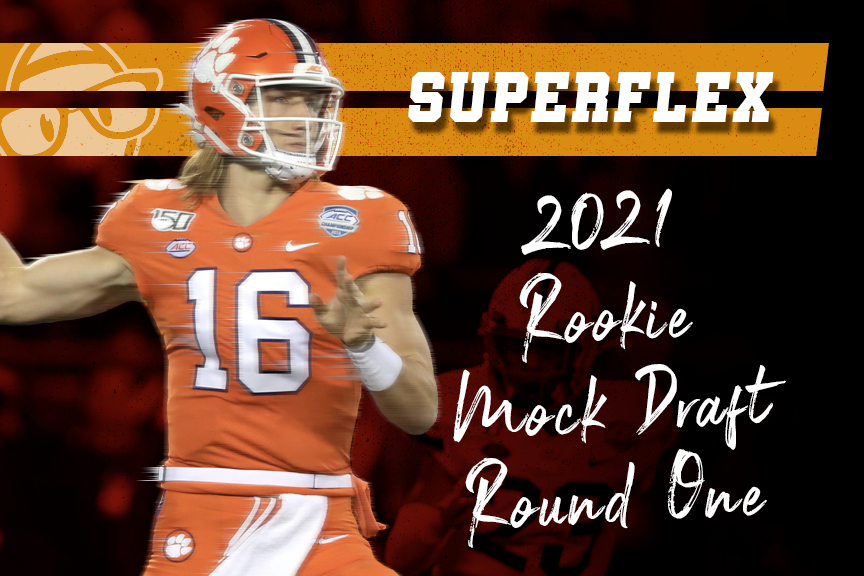 We are just two weeks away from Bowl season, a.k.a. the College football postseason. At this point in your dynasty league, you’ve either made the playoffs or are getting ready for your rookie draft. Our devy team decided to help give you an idea of just how deep this draft class is. Today we will do round one of a two-round SuperFlex rookie draft mock. Here is round one. At the bottom, I’ll post a chart showing how this has changed from our last mock.

I tend not to pick first in mock drafts because I like to see how things shake out, but for my first mock, but I suffer from Trevor Lawerence Fever. There is no other option in Superflex, he is the 1.01, and you are set for years to come.

With Lawrence, you can anchor your fantasy team for the next ten years. It’s not just his smart decision making with the football. It’s his playmaking ability with his legs that make him my guy. He had 400 yards and seven touchdowns on the ground last year, which equates to 6 additional fantasy points per game. Overall, his game is practically flawless and is one of the highest-graded players I’ve ever seen.

Don’t get cute. Taking Fields at the two spot is the only way to go. He continues to get better – completing nearly 80% of his passes this season, and he has been more dangerous running than he has been thus far. Fields is a potential superstar and an easy pick here.

In a weak RB class, Harris is the clear-cut RB1 in this class to me. He is shifty between the tackles, shows balance and an ability to break tackles, and is a force in the receiving game. There is no dynasty asset that you can’t acquire for a top RB, and I feel that Harris can be that type of RB.

Zach Wilson continues to tempt me, but I’m taking Etienne, who didn’t hurt his stock by going back to school. Obviously, Najee and Etienne are the top two RBs, and I was happy getting whichever one fell to me. Etienne is a modern back who plays a major role in the passing game, and I expect him to make an impact right away. Fingers crossed he goes to the Cardinals.

Trey Lance is everything you look for in a franchise quarterback. He brings athleticism to the table. He has a gun, has prototypical size, and is said to be extremely smart. Lance’s only question is his college competition because of playing at North Dakota St. I believe he’ll be the third quarterback taken in the 2021 NFL Draft. You cannot pass that up in a Superflex draft. I’d be ecstatic to get him in the middle of the first round.

By the time your rookie draft comes around, this pick could very easily be a quarterback. A couple of “Tier 2” QBs could make the case if drafted in the first round in a good landing spot, but without knowing that information, I wanted to take the best player available. Jamarr Chase is still by WR1 in this class, despite not play going into this year, and should be one of the top receivers drafted next Spring. He’s full of athleticism and has everything you want out of a top wideout. Though we didn’t see his tape in 2020, his record-setting connection with Joe Burrow showed us that he’s ready for the next level.

Zach Wilson is very likely to be drafted in the top 15 of the NFL draft next year, which is why I would be very excited to land him at pick 7 in a Superflex draft. He may not be a starter from day one in the NFL, but whichever team drafts Wilson will certainly have plans of him being their franchise QB soon. I love Wilson as a prospect due to his improved mechanics over his college career and how he throws absolute rockets for passes.

I’ll be honest here. I don’t really love Trask as a prospect, but I fully believe that he will be a first-round pick on the merit of his size, arm strength, and production these past two seasons. At 1.08 in an SF draft, this is the right pick.

With all of the top quarterbacks off the board, I had to pivot to another position, and Pitts is in a tier by himself at TE for me. While he might not be the best blocker, he is the kind of tight end the NFL is evolving to love. Essentially a tall wide receiver, he should consistently have mismatches, and given his style of play, he might be able to acclimate to the NFL game quicker than most tight ends.

While still a ton of talent on the board in Superflex leagues, quarterbacks have that extra value, in my opinion. The 2020 draft class is loaded at wide receiver and tight end. For me, Mac Jones is the last of the elite quarterbacks left in this class and my third-ranked quarterback for this class. I’d rather take my chances on a quarterback with likely first-round draft capital and grab a wide receiver in the second round. Getting a Jones and Wallace or Surratt combo for me is better than a Moore and Purdy combo.

If I can get Smith at 1.11 in my drafts this spring, I’ll jump for joy. Smith is the complete package, a true, dominant X receiver that wins in multiple ways. He outproduced Jerry Jeudy and Henry Ruggs when they were all on the field together. Without them, he’s on pace for a 1500 yard season.

The third Alabama guy in a row and the fourth in the round. I love Jaylen Waddle. I was disappointed when he went down with an injury, but I don’t think that will hurt his stock all that much. Waddle has a great catch radius, and his speed makes him a huge asset. Waddle can play anywhere on the offense and will also contribute in the return game.

This completes the first round of Mock Draft 2.0. Round two will be released on Friday. We on the devy team will continue to do these every month leading up to our favorite time of the year, draft season. You can find Round 1 of our 1QB Mock Draft 2.0 here. Continue to check back for all of our devy and NFL draft content as we push closer to the off-season.

Are you looking for film on these prospects? We have it in the Film Room!! Make sure you subscribe to the #NerdHerd, where you get exclusive content, dynasty/rookie/devy rankings, buy/sell tool, and a bonus podcast too. DynastyNerds also recently launched the #DynastyGM tool, which is a complete game-changer in the fantasy industry. Click here for a free trial. We truly are your one-stop-shop for all your fantasy football needs!