Devy: Wide Receivers On The Rise

@TheHQnerd takes a look into which college wide receivers are primed to breakout this year. 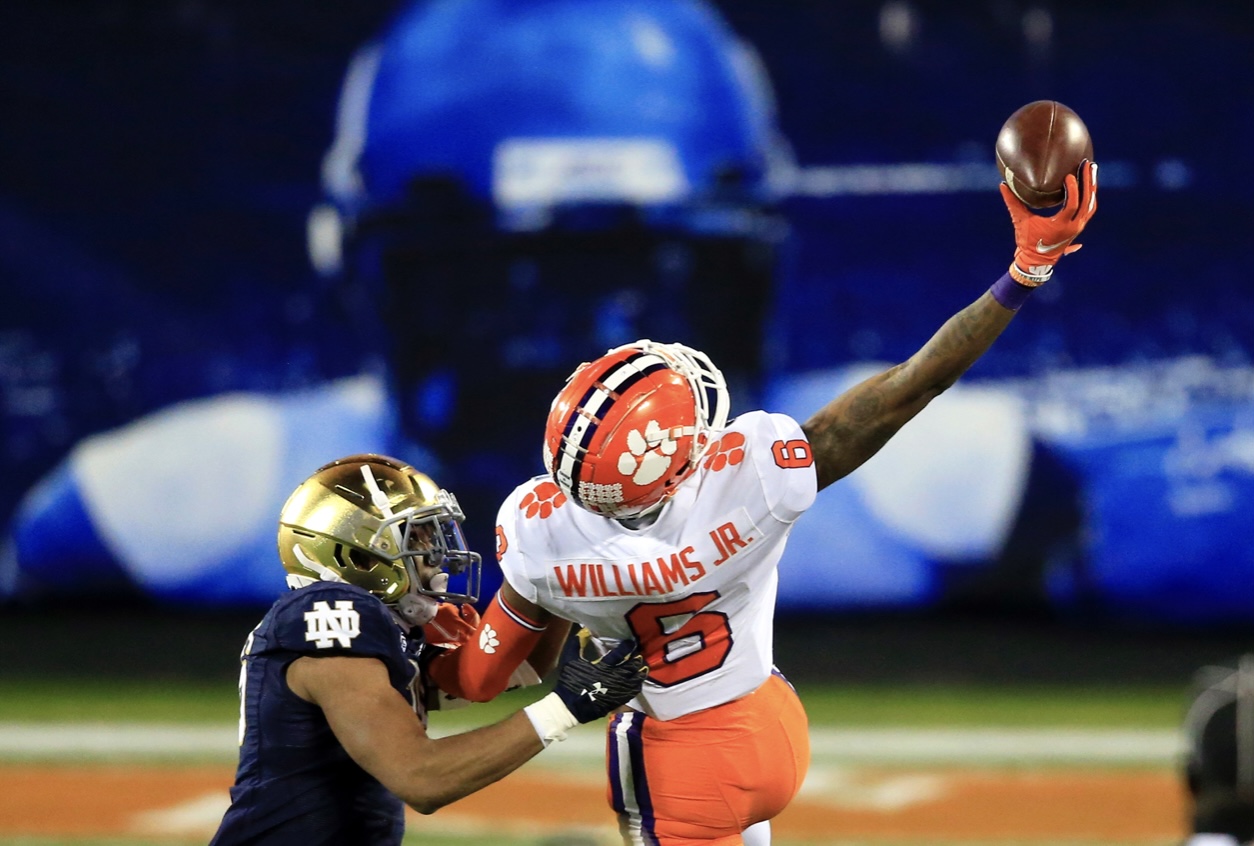 It’s time to start looking toward the 2021 football season, Nerd Herd! I recently wrote about running backs who are ready to rise. Now it’s time for the wide receivers. Let’s take a closer look at a few positioned well to make a big jump in devy for 2021.

Johnston is a fun player to watch who seems destined to break out this year. He possesses an ideal size and speed combo at 6’4, 193 pounds. In his freshman year at Forth Worth, Johnston collected 22 receptions for 487 yards and two touchdowns. He quickly gained a reputation as an explosive playmaker.

One look at Johnston, and it’s easy to see he’s oozing with talent. He quickly passes the eye test when you watch him. He doesn’t come without some warts, though. Johnston is a lean 193 pounds. Adding a little bit of play weight will allow Johnston to play with more physicality. He could also enhance his route running technique. Johnston did a lot of his damage vertically, primarily on go routes. Expanding his route tree will only diversify his game more.

Altogether Johnston seems to be in a prime position to take a significant leap among the college football elite at wide receiver. Teammate Taye Barber has been a constant but works primarily in the slot. There’s not much standing in the way of a breakout year for Johnston. Continued chemistry in year two with quarterback Max Duggan should help as well.

Quentin Johnston has the alpha size combined with the ability to get any ball he wants. Johnston is ranked WR14 according to Devy Watch. With a productive 2021 season, he should be among the elite prospects at the wide receiver position in devy.

Four-star recruit Downs enters his sophomore season at Chapel Hill, looking to make considerable strides. The 5’10 180-pound speedster from Georgia didn’t get the chance to do a ton for most of his freshman 2020 season. He saved his best for last, however. In the season finale Orange Bowl, Downs exploded, showing off his electric speed, gathering four receptions for 91 yards and a touchdown. This breakout performance would lay the framework down for the 2021 season.

Downs totaled seven receptions for 191 yards and three touchdowns for the year. Expect that to change. He enjoys the frill of having one of the best quarterbacks in college football in Sam Howell. Downs should see a substantial increase in targets in 2021. The departure of wide receivers Dyami Brown and Dazz Newsome to the NFL will provide increased opportunity for Downs to showcase his talents in a playmaker role. He is an excellent buy in Devy right now, ranked WR29 over at Campus 2 Canton. I expect him to fly up devy rankings by midseason.

Despite losing star wide receiver Tee Higgins to the NFL, Clemson showed it could keep churning out talent at the position. Williams stepped in nicely in 2020 for the Tigers, hauling in 24 receptions for 306 yards and two touchdowns. He has outstanding size at 6’3 190 pounds with room to grow. Williams showcased the ability to make tough contested catches in traffic. He has a tremendous catch radius to go along with an enormous wingspan. It’s plays like this one below that pageant the talent he possesses. Williams gets off the press coverage well to begin the route. It’s just all EJ Williams talent from here on out. He boxes out the defender where only he can get the win. Williams exhibits terrific body control adjusting mid-air. Oh, and did I mention he has excellent hands?

Williams still needs to fill out a little more frame-wise, and I think he will. He doesn’t have the most incredible long speed and could improve route running technique. He remains a little raw, but the talent is clear to see. While Trevor Lawrence graduated to the pros, uber-talented quarterback D.J. Uiagalelei takes over in Death Valley. Clemson has a talented wide receiver room, but Williams’s role should be secure playing on the outside. He may not see an enormous amount of volume, but it shouldn’t be a major concern on Clemson’s efficient offense. Williams is ranked WR35 at our DynastyGM devy rankings. I don’t believe he will be ranked anywhere near that number by this time next year.

Smith-Njigba entered Columbus as a highly touted five-star recruit, according to 247 Sports. When you arrive at Ohio State University, you have to be ready to compete against prospects that came out just as highly regarded. It’s no secret just how loaded with talent the Ohio State wide receiver room is right now. Star wide receiver Chris Olave surprisingly returned for his senior season. The Buckeyes also have another young star in Garret Wilson, who enters his junior year. And that’s not all. Talented receivers Julian Fleming, Emeka Egbuka, and Marvin Harrison Jr. are also there.

Smith-Njigba didn’t see much action in year one producing ten receptions for 49 yards and one touchdown. He showed off a lot of that promise in his one touchdown, though.

Jaxson Smith-Njigba has good size at 6’0 and just under 200 pounds. He’s a matchup problem with his size/speed combination. It won’t be easy for JSN to breakout in year two with such a star-studded cast around him, but I expect him to make considerable strides in production. His above-average blocking will keep him on the field. Defenses paying more attention to Olave and Wilson can only help as well.

Smith-Njigba is ranked WR10 according to our DynastyGM. Look for him to maintain a healthy standing in the top ten of devy wide receiver rankings. The future is bright in Columbus.