@50shadesofdrunk is here with some spooktacular IDP plays for week 9. 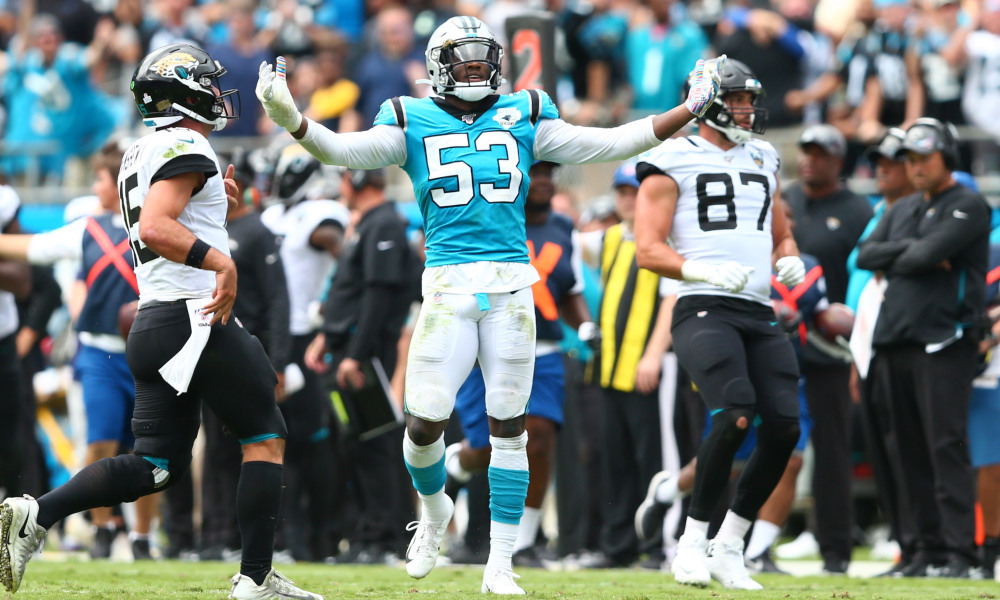 In 2018 Roquan Smith was the highest-drafted linebacker in the NFL. He was a great prospect and a top 10 selection by the Chicago Bears ahead of players like Darius Leonard and Tremaine Edmunds. In Week 9 he gets a road matchup against the Philadelphia Eagles. While this matchup should bring owners excitement the overall production from Smith in 2018 hasn’t been what many anticipated with a less than stellar 44 tackles and 1 pass defended. His lack of production in other areas is alarming posting no sacks, forced fumbles, fumble recoveries or interceptions while other members of the defense have seen continued success, continuing a trend that goes back to last season. On the season, cheaper draft option and fellow inside linebacker, Danny Trevathan has outproduced him and it’s not even particularly close. Trevathan has 61 combined tackles, a forced fumble, and a sack. It’s time to temper expectations for this season, which were high.

Jarrod Wilson has been a steady source of modest IDP production this season. Through 8 weeks he’s compiled 38 tackles and 1 PD for his fantasy owners. He’s just one or two big plays away from being a valuable starter but hasn’t shown much big-play ability in his career. In week 8 he suffered a minor knee injury and has been limited in practice all week. He’s a smart fade at a fairly deep position.

Brian Burns has had a great start to his rookie season and a great start to his IDP career. 15 tackles, 4.5 sacks, a forced fumble, a fumble recovery, and a touchdown all within his first two months in the NFL. While the talent is undoubtedly there, Burns did have wrist surgery during the teams Week 7 bye. His snap share percentage was down below 50% for the first time in his career the two games leading into the bye week and just 33% the week following his surgery. The Panthers are choosing to use him sparingly as to not reinjure him, though he obviously has medical clearance to play post-op. The matchup is a juicy one against the Tennesse Titans but sometimes it’s best to say no to temptation and make the tough call. Until his snaps come back up and his health is at 100% Brian Burns is a high-risk IDP play.

Eric Kendricks has historically been a three-down linebacker in the NFL. Unfortunately for IDP fantasy managers, he’s never really been a high-level IDP producer finishing well outside the top 12 point leaders at LB the past 3 seasons. There’s a fire in the way Kendricks is playing this season though and anyone who’s watched the Vikings even a little has seen Kendricks making plays. He’s on pace for his best statistical season to date and by far his best IDP season with already 68 tackles under his belt. That stat alone puts him in some elite company and a top 10 tackle producer at linebacker. To go along with those tackles, Kendricks is also the pass defended leaders at the linebacker position with an eye-popping 10 passes defended this season. That’s tied for second-most in the NFL across ALL positions. To do what he’s doing at the linebacker position in coverage is truly special. He gets to face the Tennesse Titans in Week 9 but he’s a must-start every week regardless of matchup. If he’s on your team you’re truly blessed.

The Seattle Seahawks made a bit of a splash last week when they traded for Detroit Lions safety, Quandre Diggs. It’s no mystery to anyone who follows the Seahawks that their defense has not been as good as we’ve come to expect in the not so recent past. This addition shouldn’t take away from the fact that now healthy, rookie defensive back Marquise Blair has started to show signs of life. Since Week 5 when he last played no defensive snaps he’s registered 12% in Week 6, 100% in Week 7 and 84% in Week 8. Starting safety Bradley McDougald has been injured which leads to his increased snap percentages but his production on the field seems to be warranting his continued playtime. In the last two weeks, Blair has 19 combined tackles, a forced fumble and 1 pass defended. Very good IDP production for the position and showing both solid tackling and big-play ability. Managers dealing with some crucial bye weeks would be smart to have Blair on their radar in his Week 9 matchup against the Tampa Bay Buccaneers. Check your waiver wires in redraft because he’s likely floating around out there just waiting to be played.

Since coming off his 2 games suspension, defensive end Robert Quinn has been an absolute sack machine for the Dallas Cowboys. He’s managed 6 sacks and 11 total tackles across the 5 weeks he’s been in the lineup and played over 70% of defensive snaps in 3 of 5 outings. Even though he’s played in 2 fewer games than star defensive end Demarcus Lawrence, Quinn has outproduced him in IDP leagues on the season. Robert Quinn spent all of 2018 on the Miami Dolphins and was considered by many to be a wash when the Cowboys signed him. Quinn has shown himself to be one of the leagues elite edge rushers in the past though and boast a 19.5 sack season in his career. In Week 9 Quinn gets to face divisional rival the New York Giants and their rookie quarterback Daniel Jones. Jones is the most sacked quarterback in the last 4 weeks and has taken 16 sacks in that time.